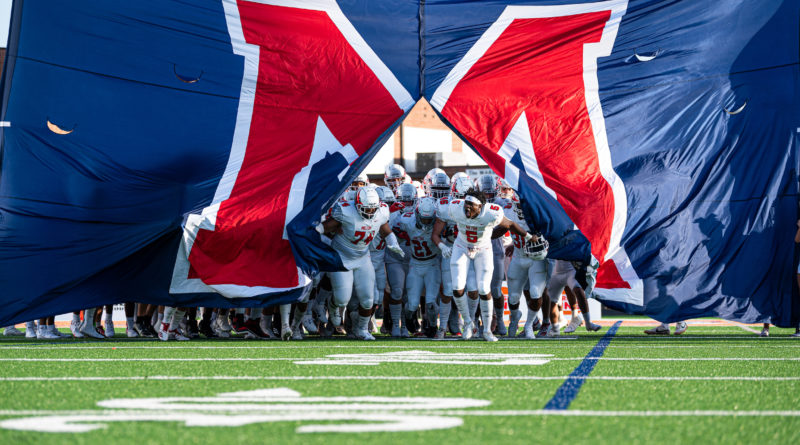 If, by now, you don’t know the story of how one “high school” football team fooled officials into inviting them to play in a nationally televised event against one of the top programs in the country, you should probably sit down and buckle up.

This is a rollercoaster of a story, one filled with insane twists and turns that never seems to end. By the time you finish reading this, there’s a strong possibility new details will have emerged on what some are calling one of the craziest stories of 2021.

The afternoon of Sunday, Aug. 29, viewers who tuned in to ESPN were treated to a high school football game between IMG Academy (FL) and Bishop Sycamore (OH), aired live from the Pro Football Hall of Fame.

IMG won 58-0, which is no story by itself considering the program’s track record. The story, and what’s captured the attention of the sports world in the 48 hours since the game, is the team IMG beat.

For a litany of reasons, Bishop Sycamore never should have played IMG (one of the top teams in the country) in Canton (arguably the most hallowed grounds in football) on ESPN (a network branded as “The Worldwide Leader in Sports”).

Minimal information exists on Bishop Sycamore, which says it is an online-only school based out of Columbus, Ohio.

The school’s website seems to be unfinished or a work in progress, as the About and Staff pages are currently blank. The team does have a school address listed on its MaxPreps page, but the address belongs to the library at Franklin University in downtown Columbus.

An employee at the library said Bishop Sycamore previously rented a room in the building but no longer does, according to The Columbus Dispatch.

The school is not a member of the Ohio High School Athletic Association, as it doesn’t field enough sports teams to meet the necessary criteria. Instead, Bishop Sycamore plays a national schedule. According to MaxPreps, the team has the fourth-toughest 2021 schedule in the entire country.

ESPN was reportedly told of several high-profile recruits on Bishop Sycamore’s roster. This, if true, would have made for a much more competitive and safer game. It appears there are no such recruits on the Centurions, however.

No roster or coaching staff is listed for Bishop Sycamore on MaxPreps or SBLive’s team page, but the team does appear to have an updated roster on its Hudl page where it posts highlight clips.

Multiple Bishop Sycamore players listed as seniors have old highlight tapes showing them play their senior season for a different team in 2020.

A dive into one player’s Twitter account shows he reported offers from Michigan, Nebraska, Oregon, Tennessee and more, but no profile can be found for the player in any of the recruiting databases such as 247Sports or Rivals.

Another player does have a recruiting profile on 247Sports, but the profile shows he was once a member of Kentucky’s 2021 recruiting class before de-committing. Instead of enrolling at Kentucky or any other college or junior college, he joined Bishop Sycamore and added “Class of 2022” to his Twitter profile’s biography section.

A 2020 tweet from Sports Illustrated shows video of a Bishop Sycamore player laying out opponents in a game. That same player was a senior on a Michigan high school team in 2019, according to MaxPreps.

As if its nationally televised matchup with IMG wasn’t enough of a jaw-dropper, Bishop Sycamore played the game less than 48 hours after they played another game in Pennsylvania.

The team initially tried to defend itself by saying it had multiple squads, but that argument was swiftly disproven. Between local reporting from the game in Pennsylvania and the footage provided by ESPN, there’s enough evidence to suggest several players from Bishop Sycamore played Friday and Sunday, with some playing both offense and defense.

A GoFundMe page was created Aug. 21 with the goal of raising $20,000 for team equipment, travel and meals. Only $140 was collected before the fundraiser stopped accepting donations.

All of this is only taking into consideration the safety of Bishop Sycamore’s players. If indeed the Centurions have played with several overaged players in the past few years, which at this point seems highly likely, there’s no telling how many real high school kids they endangered in the process.

In 2019, Bishop Sycamore attempted to play in the Freedom Bowl, a yearly multi-team event held at Milton (GA). The organizers of the event, including Milton athletic director Gary Sylvestri, matched the team up with Mainland (FL) for a Saturday morning game in the metro Atlanta area.

As the event approached, organizers at the Freedom Bowl grew suspicious of Bishop Sycamore due to a string of red flags. Issues arose collecting team pictures, stats and paperwork. The team missed its deadline to sign up for a hotel near Milton.

“We started looking into them deeper and deeper,” Sylvestri said. “We realized they were nonexistent.”

They didn’t like what they found, so the Freedom Bowl’s organizers trusted their gut feeling and removed Bishop Sycamore from the event. Mainland (FL) was notified of the cancellation early in the week leading up to the game and didn’t lose any money in the deal, according to The Daytona Beach News Journal.

All this took place nearly two years ago. So, when on Monday, Sylvestri’s phone began blowing up with messages from friends about Bishop Sycamore’s latest escapades, he was shocked. With all the internet resources at one’s disposal nowadays, Sylvestri couldn’t comprehend how anyone, let alone a company with the size and stature of ESPN, missed the warning signs.

To add to the confusion and questions surrounding ESPN’s broadcast and Bishop Sycamore, Sunday’s game at the Pro Football Hall of Fame wasn’t the first matchup between the team and IMG Academy. IMG hosted the Centurions in Florida on Oct. 16, 2020, and won 56-6.

ESPN and its viewers might have been surprised, but IMG likely knew exactly what it was getting into Sunday when it took the field. The Ascenders were slated to hand out a beatdown of epic proportions, and it would be televised for the world to see.

Following the game and its ensuing controversy, ESPN released a statement defending itself. The company pointed out it had no part in scheduling the games, just broadcasting them. Paragon Marketing Group handled the matchmaking and scheduling of the games.

“We regret that this happened and have discussed it with Paragon, which secured the matchup and handles the majority of our high school event scheduling,” ESPN said. “They have ensured us that they will take steps to prevent this kind of situation from happening moving forward.”

On Tuesday, USA Today reported DeMatha (MD) decided to cancel its Oct. 1 game against the Centurions.

“We have been doing a lot of researching, and after discussing it with our coaching staff, we have decided to cancel that game with Bishop Sycamore because they have ineligible players and it would be a liability issue,” DeMatha president Fr. James R. Day said. “We think this is the right decision.”

Bishop Sycamore has already lost one upcoming game. The question remains how much longer the team — and school itself — will be around.