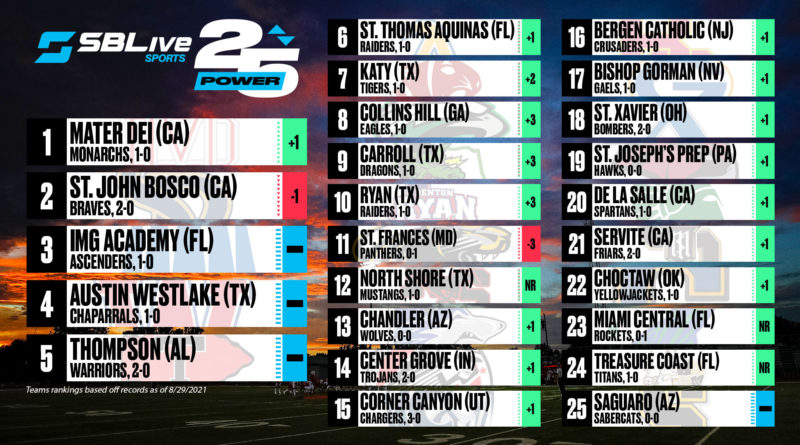 Mater Dei moves into the top spot in the SBLive Power 25 national high school football rankings this week after the Monarchs’ impressive 45-3 victory over Duncanville (Texas) on Friday.

Elsewhere around the country, Treasure Coast (Fla.) pulled off a huge upset of American Heritage (Fla.) and makes its Power 25 debut this week at No. 24. Also new to the Power 25 this week are No. 12 North Shore (Texas) and No. 23 Miami Central (Fla.). Miami Central was No. 18 in the preseason rankings, and moves back in because its 35-12 road loss to St. John Bosco looks better than it did a week ago after Mater Dei dominated in Texas. Mater Dei and St. John Bosco play in the same league and are very similar in terms of talent and Power 25 ranking.

Read more on this week’s Power 25 teams below.

Ranking rationale: Mater Dei went to Texas and dominated from the opening kickoff en route to a 45-3 win over Duncanville, last week’s No. 10 team. USC commit Domani Jackson had a pick-six on Duncanville’s first pass attempt and on the Monarchs first play on offense, Oklahoma running back commit Raleek Brown scored a 75-yard touchdown.

Ranking rationale: Through two games, St. John Bosco’s defense has been elite, but their offense hasn’t been up to their usual high standards, so they drop to No. 2. With so many Division 1 recruits on the roster, expect the Braves offense to improve.

Ranking rationale: IMG played their opener against Bishop Sycamore, an online charter school that appeared to lie about their talent level in order to play on ESPN. The game didn’t go well for the Centurions and ended up making national headlines.

Ranking rationale: Following last year’s 6A Division 1 championship, Westlake enters this season as the No. 1 team in Texas. 2022 Clemson QB commit Cade Klubnik is a big reason why. In Westlake’s opener, Klubnik threw for 226 yards and three TDs. He also rushed for a fourth touchdown.

Ranking rationale: Thompson has won their first two games by a combined 110-0 score. Star quarterback Conner Harrell is now a senior after leading last year’s state title team and Thompson has also added some key transfers, which gives them a chance to be even better than last year’s undefeated team.

Ranking rationale: In a game featuring 30 prospects with at least one FBS scholarship offer, St. Thomas Aquinas took down No. 11 St. Frances Academy 38-23 thanks to forcing five turnovers. St. Thomas Aquinas QB Zion Turner completed 22 of 32 pass attempts for a career-high 298 yards and two touchdowns in the game. He added another 42 yards and a score on the ground as well.

Ranking rationale: Last year’s 6A Division 2 Texas champions bring back a loaded defense as well as junior quarterback Caleb Koger this season. Koger threw one TD in Katy’s opener, but it was junior running back Seth Davis who stole the show rushing for 147 yards and a touchdown.

Ranking rationale: Collins Hill has the most electric QB/WR combo in the nation in Sam Horn, a Missouri commit, and Travis Hunter, a Florida State commit. Hunter is the unanimous No. 1 player in the 2022 class and he put on quite a show in the Collins Hill opener catching 13 passes for 232 yards and two scores.

Ranking rationale: Last year’s Carroll QB Quinn Ewers opted to skip his senior high school season to play at Ohio State a year early, so on paper the Dragons had a void to fill under center. Kaden Anderson got the start at quarterback Thursday night and silenced all doubters completing 16 of 24 passes for 261 yards and three TDs. He added a rushing touchdown as well.

Ranking rationale: Ryan brings back 14 starters from last year’s 15-0 state title team and their experience showed in a 40-7 win against Longview. Junior running back Kalib Hicks rushed for 139 yards and three scores in the win.

Ranking rationale: After not playing last season due to COVID-19, St. Frances has returned to its place among the nation’s best teams. They fell to No. 6 St. Thomas Aquinas 38-23 in their opener, but they competed in defeat. The Panthers play in the trenches was impressive led by defensive lineman Derrick Moore, an Oklahoma commit. Five of the top six 2022 football recruits from Maryland attend St. Frances, per 247Sports.com. The top-ranked recruit in the 2022 class at St. Frances is linebacker Jaishawn Barham.

Ranking rationale: North Shore is once again one of the top teams in Texas. In their opener, Jayven Anderson and Jacoby Davis each had pick-sixes. Both players are Division 1 prospects.

Ranking rationale: St. Xavier won the Division 1 title in Ohio last season and the Bombers are the top-ranked team in the state to begin the 2021 season. In their win against Colerain, St. Xavier forced a running clock in the first half.

Ranking rationale: The Friars have one of the best offenses in the country and that was on full display in their win against Mission Viejo, but their defense also played extremely well last Thursday. Corner Mike Hurst had an interception in the win.

Next game: Sept. 3 vs. Springdale (Arkansas)

Ranking rationale: 2023 QB Steele Wasel is a star in the making for Choctaw. The Yellowjackets finished last season as the No. 2 team in Oklahoma, but this year they should end the season at No. 1 thanks to bringing back a lot of impact players. In their opener, they routed Beacon Hill 66-0.

Ranking rationale: Central’s defense played solidly in their opening 35-12 defeat to No. 2 St. John Bosco. They now face another tough test against No. 17 Bishop Gorman at home. Seven Central players are ranked in the top 150 of 247Sports’ 2022 Florida recruiting rankings. Wesley Bissainthe leads the way at No. 17. He hold offers from some of the top schools in the country, including Miami, Penn State and Alabama.

Ranking rationale: Eden James, the son of Edgerrin James, rushed for 267 yards and two touchdowns leading his Treasure Coast team to a huge upset over American Heritage, last week’s No. 6 team. The win propels Treasure Coast into the Power 25 where they will stay if they continue to have that kind of success on the ground.

5 TEAMS WHO JUST MISSED OUT

American Heritage (0-1): American Heritage allowed Treasure Coast running back Eden James to rush for 267 yards and two touchdowns in a 29-21 defeat. The Patriots may be 0-1, but they have too much talent to move off of our Power 25 radar. Mark Fletcher, Brandon Inniss, Marvin Jones Jr., Earl Little Jr. and Jacolby Spells are all high level Division 1 recruits.

Bixby (Okla.) (1-0): We rank Bixby as the No. 2 team in Oklahoma. Senior running back Braylin Presley is one of the most electric players in the country. In the first half of Bixby’s 69-14 blowout win against Mansfield-Timberview (Texas), he had seven carries for 54 yards and six receptions for 78 yards and a TD.