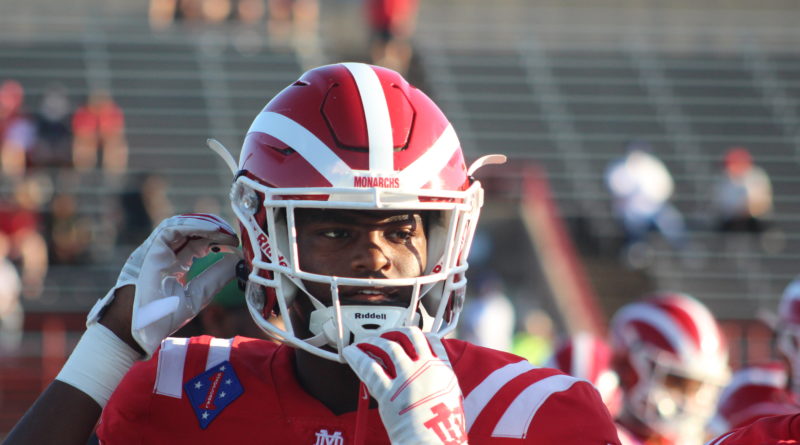 DUNCANVILLE, Texas — The Mater Dei Monarchs made it clear that their stop in the Lone Star State was strictly a business trip.

No. 2 Mater Dei took care of business by blowing past No. 10 Duncanville in a marquee California-versus-Texas matchup for a dominant 45-3 season-opening road win Friday at Panther Stadium in Duncanville

“I would have rather gotten my butt kicked like this than play a team that wasn’t very good and fool ourselves,” Duncanville head coach Reginald Samples said.

“We are who we are no matter who we play. I would rather not fool myself into thinking we’re all that if we didn’t play well. This team showed us where we are and we’ve got a long way to go.”

Here are five key takeaways from the Monarchs’ impressive road victory over the Panthers.

The Monarchs seized control of this game in the early stages with their play at the line of scrimmage.

Mater Dei dominated in the trenches, an area where the Panthers possesses considerable depth, both offensively and defensively.

Duncanville senior defensive end Omari Abor, a five-star recruit and the top Class of 2022 defensive line prospect throughout Texas, was mostly held in check. Abor upped his game in the second half with a few big hits and a late sack, but Mater Dei’s offensive line prevented the Panthers’ from penetrating the pocket.

On the flip side, the Monarchs’ defense jammed the middle of the field and overwhelmed the interior of Duncanville’s O-line.

The Panthers’ two offensive tackles Jaylen Early and Cameron Williams — Florida State and Oregon commits, respectively —  showed flashes of their potential, but Duncanville’s offense could not establish the run between the tackles and struggled to stretch the field through the air while escaping Mater Dei’s relentless pass rush.

Those factors enabled the Monarchs to outgain the Panthers 406-191 in total yardage.

The biggest question mark entering Friday’s season opener for Duncanville was who would step up at quarterback and take the reins to the offense.

Unfortunately for the Panthers, though, that question could linger past Week 1.

Senior Solomon James got the start for Duncanville and played the entirety of the first half before being swapped with sophomore Jameir Wills who played the remainder of the game at quarterback.

James got off to a rocky start in his first career varsity start. He threw two first-half interceptions, both of which led to scores.

Mater Dei’s first pick was returned for a touchdown. The Monarchs also scored on a 75-yard touchdown run immediately after their second interception on fourth down in the back of the end zone.

Wills demonstrated better ball security by comparison without committing any turnovers, but the Panthers’ sophomore signal caller was pestered by Mater Dei’s front seven all night.

Neither Panthers’ quarterback could consistently push the ball downfield as both relied on short to mid-range passes in the face of a collapsing pocket.

Duncanville head coach Reginald Samples said he would have to watch film of Friday’s game before determining the team’s Week 2 starter behind center.

“There were points where we moved the ball. We just didn’t mentally play well,” Samples said. “We didn’t come out ready to play and we’ve got a lot of moving parts. This is not the same team we had last year, but we’re going to fix it and we’re going to get better.”

On the first drive of the game, Mater Dei defensive back Domani Jackson — a USC commit — snagged an interception at the line of scrimmage and ran it back for six.

Duncanville drove nearly the length of the field on its ensuing drive, but the Monarchs’ defense came up clutch again by stopping the Panthers at the nine-yard line and forcing their opponents to settle for a short field goal.

Mater Dei maintained that edge defensively in the later stages of the contest, too, stopping the Panthers on four of five fourth-down conversion attempts.

The Monarchs ended the night scoring 38 unanswered points after yielding Duncanville’s only trip to the red zone during the first quarter.

Despite the lopsided loss, several of the Panthers’ top performers Friday should give the program renewed optimism moving forward.

Defensively, linebacker Jordan Crook made plays all over the field. Crook, an Arkansas commit, helped corral Mater Dei running back Raleek Brown, an Oklahoma commit, and the Monarchs’ rushing attack as the night progressed and delivered a few bruising hits.

On the offensive side, senior running back Malachi Medlock and junior receiver Lontrell Turner showed they have what it takes to serve as the focal points of the Panthers’ attack this season.

Turner’s speed and hands will make him a reliable playmaker and a primary pass target.

Medlock, meanwhile, gave the Panthers’ rushing attack a big boost by reliably hitting outside running lanes and finding open space. He ended the night with 123 yards on 21 carries.

NOWHERE TO GO BUT UP FOR PANTHERS

Despite being on the receiving end of a blowout loss, expect Duncanville to correct its course quickly.

The Panthers lost their 2020 home opener in a similar fashion to Florida-based perennial power IMG Academy but rebounded with authority by winning nine consecutive games and outsourcing their opponents 465-103 to advance to the 6A DI state semifinals.

Duncanville still boasts a roster with more than a dozen key contributors holding multiple FBS scholarship offers and one of the most experienced coaching staffs in Texas high school football, two important factors that should spur a quick turnaround.

“It means something for them to want to come here,” Samples said. “I don’t think they would have come if they thought that they would have beaten us like that. They came here because they felt like they were going to get a good competitive game. … We weren’t the best tonight, but we’ll get there. I promise you that.”

Duncanville will look to get back into the win column when it returns to action to face Dallas South Oak Cliff at 7:30 p.m. Friday at Panther Stadium.

The Panthers will welcome another out-of-state opponent to Duncanville in Week 3 when they host the Bishop Sycamore Centurions out of Columbus, Ohio.

Mater Dei, meanwhile, will take a week off before traveling to face Henderson Liberty at 7:30 p.m. Friday, Sept. 10 in Nevada.