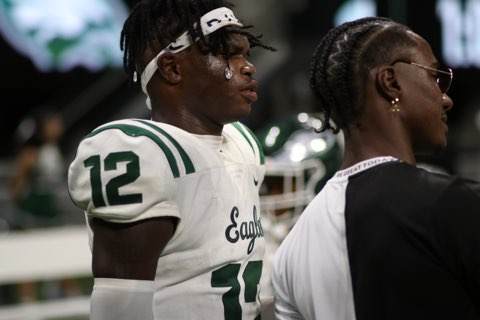 Collins Hill’s Travis Hunter, the top recruit in the nation in the class of 2022, is firmly committed to Florida State.

Hunter’s senior season began Saturday when his Eagles dominated Brookwood 36-10 in the final game of the 2021 Corky Kell Classic in Atlanta.

He caught 13 passes for 232 yards and two scores and even threw a touchdown pass, plus made an interception on defense.

“He’s just extremely intelligent on both sides of the ball, not to mention the best athlete I’ve ever coached,” Collins Hill coach Lenny Gregory said.

Hunter has already racked up 16 Division 1 offers — including Georgia, Alabama, Clemson, Ole Miss, Texas and Oklahoma — but he committed to FSU on Feb. 3, 2020. He said after the game Saturday that he doesn’t have any doubts about that decision.

In FSU, Hunter is confident he’s found a place to call home for the next three or four years because of how comfortable he’s been with recruiters and coaches.

“It’s a family environment,” Hunter said. “It felt like home when I got there, and the coaching staff … they really believe in me and they trust me.”

Hunter is aware of his incredible abilities on the field, and he gets surrounded by members of the media every time he steps off the field at games.

However, Hunter said nothing is given in life, and he is prepared to earn his spot with the Seminoles.

“They (FSU coaches) want me to come in and work for my spot,” he said. “They aren’t going to just give me a spot.”

The level of competition is something Hunter will have to adjust to, but nothing about his game suggests he isn’t ready to play at the highest level of college football.

Hunter’s play at cornerback is what caught FSU’s attention, but he’s confident he’ll get the opportunity to play wide receiver as well.

For now, Hunter has one more season of football at Collins Hill to focus on.

Based on his performance in the season opener, this may be a year of redemption for him and his team since they fell short of the state title last year.

Time will tell what his Eagles can accomplish in 2021, but his commitment to FSU may as well be set in stone.