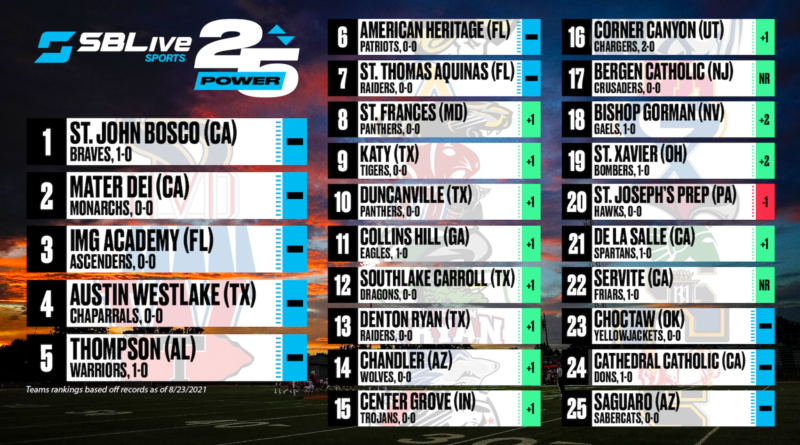 We’re only one week into the fall 2021 high school football season and there’s already been a major upset.

On Friday in Georgia, reigning 7A champion Grayson, last week’s No. 8 team, fell to Creekside 19-14, which moved the Rams out of this week’s SBLive Power 25 rankings. Miami Central, ranked No. 18 last week, lost to No. 1 St. John Bosco 35-12. The Rockets are also out of the Power 25 this week. Their defense played solid, but offensively Central had a tough time against the Braves.

Ranking rationale: The Braves defense put on a show against Central allowing only two field goals and a touchdown. St. John Bosco’s front seven showed that they’re the best in the nation in the win.

“We knew that this was a good team coming in … I just give credit to our coaches,” Braves senior defensive lineman Jairus Satele said postgame. “Our defensive coordinator, Coach King. We just follow our game plan … and go from there … The three people next to me, sometimes two (when in a 3-4 front), we trust each other, the chemistry is there, so we pick each other up.”

Ranking rationale: Mater Dei will be loaded once again this fall. The Monarchs have a California-best six players on SBLive’s Preseason All-State team. St. John Bosco got the edge over Mater Dei for our No. 1 spot due to having better depth, but both teams are stacked. The Monarchs’ top recruit is 2022 five-star cornerback Domani Jackson, a USC commit. Mater Dei meets St. John Bosco in the regular season Oct. 1. The two teams have met in the CIF Southern Section championship game every year since 2016.

Ranking rationale: Last year’s No. 1 Power 25 team is once again the most talented team in Florida on paper. 2022 Florida State QB commit AJ Duffy will lead the team under center. IMG Academy has five of the top ten 2022 football recruits in the state, per 247Sports.com. They also have four of the top ten in the Class of 2023. The Ascenders will be coached by Pepper Johnson this season. Last week, they beat No. 6 American Heritage 35-15 in a scrimmage.

Ranking rationale: Following last year’s 6A Division 1 championship, Westlake enters this season as the No. 1 team in Texas. 2022 Clemson QB commit Cade Klubnik is a big reason why.

Ranking rationale: Thompson didn’t allow a first down until the third quarter in their rout of Oxford. The Warriors return star quarterback Conner Harrell from last year’s state title team and they’ve added some key transfers, which gives them a chance to be even better than last year’s undefeated team.

Next game: Aug. 28 vs. Treasure Coast

Ranking rationale: St. Thomas Aquinas will be competing with American Heritage all season for the No. 2 ranking in Florida. Running back Anthony Hankerson rushed for 1,178 yards and 14 TDs last season.

Ranking rationale: After not playing last season due to COVID-19, St. Frances is expected to return to its place among the nation’s best teams this fall. Five of the top six 2022 football recruits from Maryland attend St. Frances, per 247Sports.com. The top-ranked recruit in the 2022 class at St. Frances is linebacker Jaishawn Barham.

Ranking rationale: Duncanville returns eight starters on offense and seven on defense. The Panthers will be dominant in the trenches, but they need to replace last year’s QB, Grayson James, who’s now at Florida International.

Ranking rationale: Collins Hill has the most electric QB/WR combo in the nation in Sam Horn, a Missouri commit, and Travis Hunter, a Florida State commit. Hunter is the unanimous No. 1 player in the 2022 class and he put on quite a show in the Collins Hill opener catching 13 passes for 232 yards and two scores. He’ll play defensive back.

Ranking rationale: Quinn Ewers opted to skip his senior season at Carrol to play at Ohio State a year early. Where does that leave the Dragons, last year’s No. 2 team in Texas? It’s tough to tell since Ewers is a generational talent, but we’re keeping Carroll in the preseason Top 25. 2023 QB Kaden Anderson will replace Ewers. The Dragons return nine defensive starters, which will give head coach Riley Dodge some time to get the offense up to speed once the season starts. 2023 running back Owen Allen is another name to know for the Dragons. He rushed for 2,063 yards last season.

Ranking rationale: Ryan brings back 14 starters from last year’s 15-0 state title team. The Raiders have a lot of talent in the trenches but must replace key skill position players this fall.

Ranking rationale: 2021 Center Grove might be better than 2020 14-0 Center Grove. The Trojans’ starting quarterback, Tayven Jackson, is committed to Tennessee. In their 38-15 win over Warren Central, Jackson hit 10-of-16 passes for 143 yards and a TD with a second score rushing.

Ranking rationale: Last year’s star quarterback, Jaxson Dart, is now at USC, but the Chargers replaced Dart with another USC-bound QB, Arizona transfer Devin Brown. In Brown’s Corner Canyon debut two weeks ago, he threw for 451 yards and eight TDs in the first half alone. This past week, he threw three more touchdowns, but was also intercepted three times in a game that took place in awful weather conditions.

Ranking rationale: St. Xavier won the Division 1 title in Ohio last season and the Bombers are the top-ranked team in the state to begin the 2021 season. In their opener against a very good Lakota West team, the Bombers scored 28 unanswered points. Linebacker Grant Lyons had a key pick-six in the game that changed the momentum. He’s committed to Miami Ohio.

Ranking rationale: De La Salle’s win streak against Northern California opponents is now up to 316 games. The top player for the Spartans this season is 2022 defensive back Zeke Berry, an Arizona commit.

Ranking rationale: The Friars have one of the best offenses in the country and that was on full display in their win against Edison on Friday. Senior Arizona commit Noah Fifita threw three TDs. He tossed two to Oregon commit Tetairoa McMillan and one to Arizona commit Keyan Burnett. Senior running back Houston Thomas also rushed for four TDs.

Ranking rationale: 2023 QB Steele Wasel is a star in the making for Choctaw. The Yellowjackets finished last season as the No. 2 team in Oklahoma, but this year they should end the season at No. 1 thanks to bringing back a lot of impact players.

Ranking rationale: The Dons started their season a little slow in a 28-14 win over Torrey Pines, a team they were expected to beat by a larger margin. This season, Cathedral Catholic brings back virtually everyone from a team that outscored opponents 223-14 during California’s spring season. The Dons’ top player is 2022 defensive lineman Jaxson Moi, a Cal commit. They’ll look for an improved performance on the road against a very good Corona Centennial (Calif.) team this week.