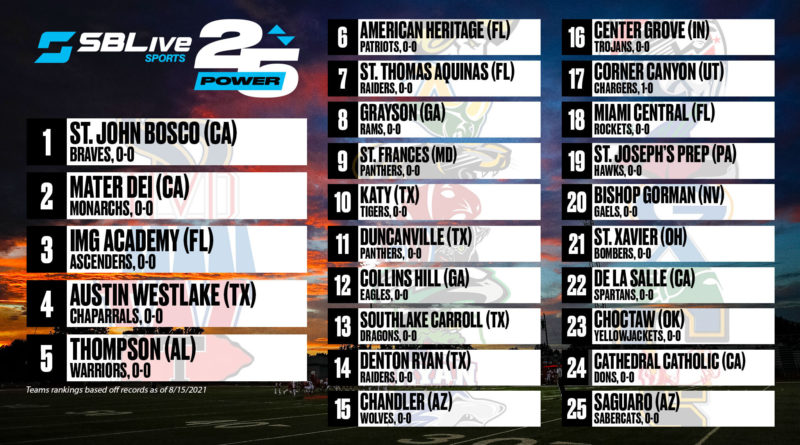 Welcome to the second year of the SBLive Power 25, a weekly look at the top high school football teams in the country.

Our national football rankings are compiled by SBLive reporter Connor Morrissette based on observations and conversations with an extensive network of coaching and media sources across the country. The rankings will be released every Monday throughout the fall 2021 season.

Ranking rationale: St. John Bosco returns 10 starters on defense and eight on offense. The Braves not only have incredible talent, they also have great depth, which is why they start the season at No. 1. The Braves’ top-ranked recruit on offense is four-star lineman Earnest Greene. On defense, it’s 2023 defensive end Matayo Uiagalelei, who also plays tight end.

“We want to win our league, our Section championship and a state championship to be in that conversation for a mythical national championship,” Braves head coach Jason Negro told SBLive. “That’s what we’re expecting and want to be a part of.”

Ranking rationale: Mater Dei will be loaded once again this fall. The Monarchs have a California-best six players on SBLive’s Preseason All-State team. St. John Bosco got the edge over Mater Dei for our No. 1 spot due to having better depth, but both teams are stacked. The Monarchs’ top recruit is 2022 five-star cornerback Domani Jackson, a USC commit. Mater Dei meets St. John Bosco in the regular season Oct. 1. The two teams have met in the CIF Southern Section championship game every year since 2016.

Ranking rationale: Last year’s No. 1 Power 25 team is once again the most talented team in Florida on paper. 2022 Florida State QB commit AJ Duffy will lead the team under center. IMG Academy has five of the top ten 2022 football recruits in the state, per 247Sports.com. They also have four of the top ten in the Class of 2023. The Ascenders will be coached by Pepper Johnson this season.

Ranking rationale: Following last year’s 6A Division 1 championship, Westlake enters this season as the No. 1 team in Texas. 2022 Clemson QB commit Cade Klubnik is a big reason why.

Ranking rationale: Thompson brings back star quarterback Conner Harrell and has added some key transfers, giving the Warriors a chance to be even better than last year’s undefeated team.

Next game: Aug. 28 vs. Treasure Coast

Ranking rationale: St. Thomas Aquinas will be competing with American Heritage all season for the No. 2 ranking in Florida. Running back Anthony Hankerson rushed for 1,178 yards and 14 TDs last season.

Ranking rationale: Grayson is the favorite to win the 7A title once again in Georgia, but No. 12 Collins Hill has closed the gap. 2023 safety Michael Daugherty is one of the top defensive backs in the country regardless of class.

Ranking rationale: After not playing last season due to COVID-19, St. Frances is expected to return to its place among the nation’s best teams this fall. Five of the top six 2022 football recruits from Maryland attend St. Frances, per 247Sports.com. The top-ranked recruit in the 2022 class at St. Frances is linebacker Jaishawn Barham.

Ranking rationale: Duncanville returns eight starters on offense and seven on defense. The Panthers will be dominant in the trenches, but they need to replace last year’s QB, Grayson James, who’s now at Florida International.

Ranking rationale: Collins Hill has the most electric QB/WR combo in the nation in Sam Horn, a Missouri commit, and Travis Hunter, a Florida State commit. Hunter is the unanimous No. 1 player in the 2022 class. He’ll play defensive back at the next level but will see plenty of action at receiver as well. The Eagles have a legitimate chance to win a 7A title in Georgia.

Ranking rationale: Quinn Ewers opted to skip his senior season at Carrol to play at Ohio State a year early. Where does that leave the Dragons, last year’s No. 2 team in Texas? It’s tough to tell since Ewers is a generational talent, but we’re keeping Carroll in the preseason Top 25. 2023 QB Kaden Anderson will replace Ewers. The Dragons return nine defensive starters, which will give head coach Riley Dodge some time to get the offense up to speed once the season starts. 2023 running back Owen Allen is another name to know for the Dragons. He rushed for 2,063 yards last season.

Ranking rationale: Ryan brings back 14 starters from last year’s 15-0 state title team. The Raiders have a lot of talent in the trenches but must replace key skill position players this fall.

Ranking rationale: 2021 Center Grove might be better than 2020 14-0 Center Grove. The Trojans’ starting quarterback, Tayven Jackson, is committed to Tennessee.

Ranking rationale: Last year’s star quarterback, Jaxson Dart, is now at USC, but the Chargers replaced Dart with another USC-bound QB, Arizona transfer Devin Brown. In Brown’s Corner Canyon debut, he threw for 451 yards and eight TDs in the first half alone. Senior Cody Hagen caught four TDs in the game. It looks like the Chargers once again have one of the top offenses in the nation.

Ranking rationale: Central is the fourth-best team in Florida to begin the season. Seven Central players are ranked in the top 150 of 247Sports’ 2022 Florida recruiting rankings. Wesley Bissainthe leads the way at No. 17. He hold offers from some of the top schools in the country, including Miami, Penn State and Alabama.

Ranking rationale: There are 29 two-star or better recruits in Nevada in the Class of 2022, according to 247Sports, and Bishop Gorman has 11 of them on its roster, with four-star edge rusher Cyrus Moss leading the way. After playing only two games in the spring due to COVID-19, the Gaels will once again be a force on the national stage this season.

Ranking rationale: De La Salle’s win streak against Northern California opponents is now up to 316 games. The top player for the Spartans this season is 2022 defensive back Zeke Berry, an Arizona commit.

Ranking rationale: 2023 QB Steele Wasel is a star in the making for Choctaw. The Yellowjackets finished last season as the No. 2 team in Oklahoma, but this year they should end the season at No. 1 thanks to bringing back a lot of impact players.

Ranking rationale: Cathedral Catholic brings back virtually everyone from a team that outscored opponents 223-14 during California’s spring season. The Dons’ top player is 2022 defensive lineman Jaxson Moi, a Cal commit.