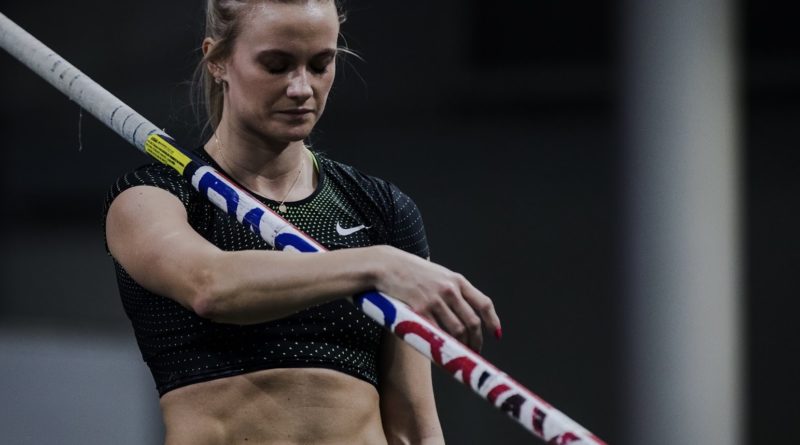 The 2020 Summer Olympics in Tokyo felt like the longest edition of mega-sports event ever, as it evolved into the 2021 Olympics thanks to the coronavirus pandemic.

But now that the games are done, we’re going to look back at all the U.S. individual gold medalists, including a look even further back to where the best athletes in the world went to high school.

The U.S. beat China by one in the race for gold, 38-37. Here are the 27 Americans who won individual golds (with one exception being a beach volleyball duo from California).

A Delaware native, Allman started throwing the discus in high school in Longmont, Colorado, and she parlayed that into a decorated career at Stanford before winning Olympic gold in Tokyo.

A Phoenix native, Carey signed in 2017 to compete for Oregon State, but she deferred her enrollment until after the Olympics. When she won gold in the floor exercise in Tokyo, it meant every member of the U.S. team has earned at least one medal.

A Portland, Oregon, native, Crouser comes from a family full of throwers. He starred in high school in Gresham and then for Texas in college before becoming a record setter and the best in the world this year.

Dressel was arguably the biggest star of the Tokyo Olympics, becoming the fifth American to win five gold medals (he won two relay golds in addition to the above three). He hit the Olympic trials scene at 15 while attending high school in Green Cove Springs, Florida, to start his golden ascent.

An avid hunter in Colorado Springs starting at age 6, English put her experience on display with an Olympic-record-setting performance to earn gold. She serves in the U.S. Army as a first lieutenant.

A Florida native and University of Florida Gator just like Dressel, Finke showed an unrivaled late kick to win both of his gold medals, setting a U.S. record in the 800.

A Florida native who grew up in Eatonton, Georgia, Hancock won his third Olympic gold medal in Tokyo (his others were in 2008 and 2012), cementing his reputation as one of the best skeet shooters ever.

Harrison has been competing at the national level since she was a 15-year-old high school student in Seattle and has ascended to become best in her sport at the age of just 19.

Jacoby enjoyed a nice summer between her junior and senior year of high school by establishing herself as one of the best swimmers in the world. She heads back to Seward, Alaska, to try to break some of the high school records she’s already set.

A Baltimore native, Kalisz starred at the University of Georgia after high school, and his list of hobbies on the Team USA home page ranks among the most eclectic: “sleeping and going to college football games.”

A Cleveland native, Kiefer grew up in Lexington, Kentucky, and became a star fencer at Notre Dame. She became the first American to win a gold medal in Olympic individual foil.

Korda made the cut at the 2013 U.S. Women’s Open as a 15-year-old, has become one of the best golfers in the world at 23 and is now an Olympic gold medalist. She’s the daughter of retired tennis star Petr Korda.

After breaking nearly every high school record at Stone Ridge in Bethesda, Maryland, Ledecky has gone on to become one of the best swimmers the world has ever seen, racking up seven Olympic gold medals in her decorated career.

Lee still trains in the gymnastics center she started at when she was 6 years old in the St. Paul suburb of Little Canada. She became the sixth U.S. woman to win Olympic gold in the all-around.

McLaughlin started setting records her freshman year of high school in Scotch Plains, New Jersey, and then she kept getting better. At age 17, in a cover story in Sports Illustrated, the magazine said McLaughlin “ranks as one of the most dominant high school athletes ever.”

Mensah-Stock switched her focus from track and field to wrestling during her sophomore year of high school in Katy, Texas, and that decision proved to have golden implications.

Moore has been one of the best surfers in the world since she was in high school, and now she adds a gold medal to her trove of trophies. The state of Hawaii even has a Carissa Moore Day (it’s Jan. 4).

Only 19, Mu set the U.S. record in winning her gold medal in the 800. She didn’t compete in high school, opting instead to run for the Trenton Track Club. She won a second gold medal in Tokyo on the 4×400 relay team.

Nageotte left Olmsted Falls as the state record holder with a 13-foot pole vault. She’s continued soaring to greater heights since, winning gold in Tokyo with a vault of 16 feet, 1 inch.

Schauffele won the individual CIF championship in 2011 golfing for Scripps Ranch in San Diego. Five years later he became the PGA Tour rookie of the year, and five years after that, at age 27, he became an Olympic gold medalist.

Shaner started shooting when he was 9, and by the time he graduated from high school in 2018, he was earning medals on the world stage. He’s due to graduate from Kentucky in 2022 as the only person in his mechanical engineering program with an Olympic gold medal.

As a high school wrestler, Steveson won four state titles and ran up a 171-match win streak, becoming the top recruit in the country his senior year. The 21-year-old had already established himself as one of the top college wrestlers at Minnesota, and now he’s stamped himself as best in the world at his weight class.

Taylor finished his high school career with a 180-2 record on his way to four state championships, earning honors as the national wrestler of the year as a senior. He went on to become a four-time finalist and two-time national champion at Penn State before winning Olympic gold.

After winning 12 national titles and one world title as a junior cyclist in San Diego, Valente became the first women’s track cycling Olympic gold medalist for the United States.

Zolotic is the first American woman to win Olympic gold in taekwondo. She grew up in the Tampa Bay area but moved to Colorado three years ago for training purposes.