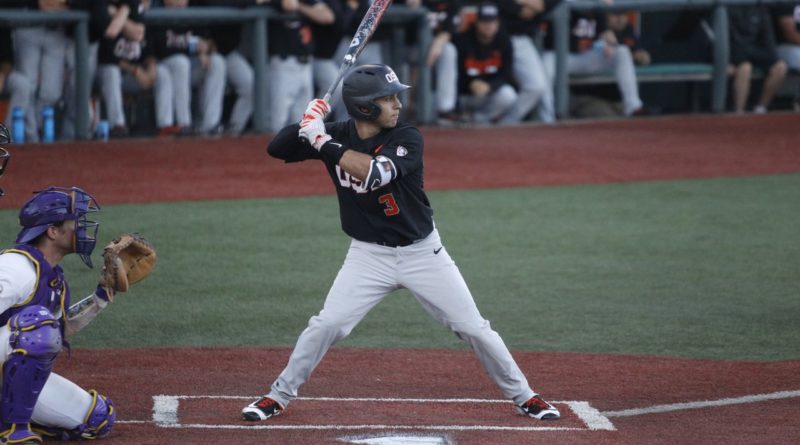 “Crazy” has become an overused word, but the 2021 MLB trade deadline was crazy.

Even crazier is to imagine some of these titans of the past decade-plus of Major League Baseball playing on high school fields, but 21 of the following 25 players did just that.

Pictured above is Nick Madrigal (photo by Sean Meagher, The Oregonian/OregonLive), the former Elk Grove High School (California) and Oregon State star who was traded from the White Sox to the Cubs at the deadline.

We’ll start and end this list with pitchers who seem like they’ve been in the majors since the Reagan administration. (We’ll try not to spoil it, but No. 1 is a right-hander whose last name vaguely rhymes with “cursor.”) Happ played four years of baseball and basketball for St. Bede Academy in his hometown of Peru, Illinois (and probably played Little League baseball there toward the end of the Reagan years), before starring at Northwestern.

It’ll be a while before we know Woods-Richardson’s value as a major leaguer, but he’s ranked the No. 67 overall prospect on MLB.com’s top 100, so the Twins got a valuable player on paper. He starred for Kempner High School in Sugar Land, Texas, as a pitcher and hitter, but the Mets drafted him as a pitcher after he had a combined 182 strikeouts with just 16 walks his junior and senior seasons.

23. Joc Pederson (from Cubs to Braves)

In less than a year, Pederson has moved from Southern California to northern Illinois and now northern Georgia. The patient, home run-hitting lefty (and frequent strikeout victim) was a baseball and football star for Palo Alto High in Northern California. He declined a baseball scholarship to USC after being picked in the 11th round of the 2010 draft by the Dodgers.

22. Danny Duffy (from Royals to Dodgers)

Duffy has played on a range of Royals teams over the past decade, including some of the worst in baseball to the World Series-winning team of 2015. He was born in Goleta, California, and played high school baseball for Cabrillo High School in Vandenberg Village, a small town in Santa Barbara County. He struck out 127 batters in 58 2/3 innings as a senior and was taken in the third round of the 2007 draft by the Royals.

21. Jon Lester (from Nationals to Cardinals)

No one on this list has more World Series titles than Lester (two with the Red Sox, one with the Cubs). The five-time all-star pitcher is a Tacoma native who starred for Bellarmine, earning the honor of Gatorade Player of the Year in Washington in 2000. Boston took him in the second round of the 2002 draft, and he debuted with the Red Sox in 2006. The Cardinals hope they get vintage Lester for the stretch run.

The AL leader in saves in the coronavirus-shortened 2020 season, Hand’s tenure in Washington was short-lived after signing a one-year offseason deal. He starred for Chaska High School in Chaska, Minnesota (Minneapolis area), earning a scholarship at Arizona State but choosing MLB instead after the Marlins took him in the second round of the 2008 draft.

Madrigal was looking like the second baseman of the future (and present) for the White Sox before suffering a season-ending shoulder injury, and now he’ll move across town to aim to do the same. He’s been one of the toughest hitters to strike out at every level he’s played, from Elk Grove High School in Northern California to Oregon State to the minors and even MLB. The No. 4 overall pick in the 2018 draft doesn’t hit for power, but he hits. Consistently.

18. Josiah Gray (from Dodgers to Nationals)

Gray is a classic late bloomer, barely getting a look recruiting-wise out of New Rochelle High School (12 miles northeast of Yankee Stadium). He went to Division II LeMoyne College in Syracuse as a shortstop, but after going 11-0 with a 1.25 ERA as a junior, he set his focus on the mound. After playing in 2017 in the Cape Cod League, the Reds drafted him in the second round of the 2018 MLB draft. The No. 41-ranked prospect gave up one earned run in five innings Monday in his Washington debut.

17. Josh Harrison (from Nationals to A’s)

Harrison’s versatility is his No. 1 tool, and he looks like a perfect fit for the playoff-positioned A’s. The star shortstop for Princeton High School in Sharonville, Ohio, in the early 2000s has played everywhere but catcher in the majors since being drafted in the sixth round by the Cubs in 2008. He even pitched a third of an inning in 2013 for Pittsburgh, so if his inning total qualified, he’d share the all-time MLB career ERA record of 0.00.

16. Kyle Gibson (from Rangers to Phillies)

Gibson was rewarded for his career first half of the year by making his first all-star team, and then the Phillies rewarded him by giving him a shot at a playoff run. He starred as a pitcher for Cathedral and Greenfield-Central high schools in Indiana, making the state all-star team after his senior year. He played college baseball for Missouri and was taken in the first round of the 2009 draft by the Twins.

15. Keibert Ruiz (from Dodgers to Nationals)

Ruiz is the player Washington had to have in order to give up the No. 1 player on this list. The Venezuelan catcher signed with the Dodgers as a 16-year-old and slowly ascended L.A.’s minor league system to become the team’s top-rated prospect. He should be catching Josiah Gray for the Nationals very soon.

14. Adam Duvall (from Marlins to Braves)

The Braves’ deadline moves were more about the sum than the individual parts, but they had to be happy to get Duvall back after watching all the home runs he hit for them in 2020. He was born and raised in Louisville and starred for Butler High School, but an injury cut short his high school career during his junior year. The Giants picked him in the 11th round of the 2010 draft out of the University of Louisville.

Martin was the top-ranked prospect moved at the deadline (No. 15 overall). He starred in high school for the Trinity Christian Academy in Jacksonville, Florida, and was drafted late by Cleveland, but he chose to play for Vanderbilt, where he played all over the diamond for the Commodores. The Blue Jays picked him No. 5 overall in the 2020 draft as a shortstop.

12. Starling Marte (from Marlins to A’s)

The A’s got a new starting center fielder and top-of-the-order hitter at the deadline as they chase the Astros. Marte grew up in the Dominican Republic and signed with the Pirates as a 19-year-old.

Schwarber got his groove back with the Nationals after the Cubs nontendered him in 2020 when he stopped hitting. He hit 25 home runs in 2021 with the Nationals, and the Red Sox hope to get more of that from the key contributor to the Cubs’ 2016 championship team. Schwarber starred for Middletown High School just north of Cincinnati and south of Dayton before playing college ball at Indiana.

The Rays made a big splash a week before the deadline by dealing for a hitter who seems to be living in some sort of ageless vacuum. The 41-year-old made his seventh all-star team in 2021 as he just keeps hitting home runs regardless of who he’s playing for. He signed with the New York Mets out of the Dominican Republic as an 18-year-old.

9. Adam Frazier (from Pirates to Padres)

Similar to Cruz, Frazier was traded before the deluge of deadline deals, but it was a big deal. The contending Padres added one of the best contact hitters in baseball and the league leader in hits. The 2021 All-Star Game starting National League second baseman starred for Oconee County High School in Watkinsville, Georgia, where he was a doubles machine. He played at Mississippi State before being drafted by the Pirates in the sixth round in 2013.

8. Joey Gallo (from Rangers to Yankees)

In addition to playing Gold Glove defense in the outfield, Gallo had two huge tools for the Rangers in 2021: hitting home runs (25) and drawing walks (74). Hitting for power has been his strength since high school, where he set the Nevada career high school record with 67 homers playing for Bishop Gorman in Las Vegas. He skipped a scholarship offer from LSU after Texas made him a first-round pick in the 2012 draft.

7. Anthony Rizzo (from Cubs to Yankees)

Rizzo is the 1 to Gallo’s 1A in terms of power bats added to the Yankees’ lineup at the deadline. Before the coronavirus-shortened 2020 season, Rizzo hit at least 20 homers for the Cubs in seven consecutive seasons, including four straight with at least 30 (including the 2016 championship season). He starred in high school for Stoneman Douglas in Parkland, Florida, which now plays on Anthony Rizzo Field.

The Blue Jays traded prospects valued higher than the package the Dodgers dealt for two star players, so Toronto really hopes to get the best from Berrios. If he keeps pitching like he did in Sunday’s debut with the Blue Jays (seven strikeouts in six scoreless innings), maybe they won’t be too upset if No. 13 and 24 on this list develop into stars. The Twins picked the Puerto Rico native in the first round of the 2012 draft.

Kimbrel starred for Lee High School in Huntsville, Alabama, but as a slugging third baseman/outfielder, not on the mound. After being drafted by the Braves in the third round of the 2008 draft, it didn’t take him long to become one of the best relief pitchers in the majors (in 2010 he struck out 40 in 20 2/3 innings and had an 0.44 ERA). Now 33, the compact 6-footer still routinely touches triple digits on the radar gun.

4. Trea Turner (from Nationals to Dodgers)

Turner was one of the best hitters in the National League during the 60-game 2020 season, and the 28-year-old has kept that momentum going in 2021, hitting .321 with 18 home runs (one short of his career high). He’s also one cycle short of holding the record all by himself at four. Turner played high school ball for Park Vista Community High School in Lake Worth, Florida. After being lightly recruited, he played for NC State and improved enough to become the No. 13 overall pick in the 2014 draft by San Diego.

3. Javier Baez (from Cubs to Mets)

Baez instigated one of the best baseball bloopers ever this season against the Pirates, but he’s had his share of hitting highlights as well. He has 23 home runs this season (one with his new team) as he tries to help the injury-ravaged Mets stay atop the NL East. Born in Puerto Rico, Baez played high school baseball for Arlington Country Day School in Jacksonville after his family moved to Florida in 2005. He quickly became a star there and was drafted ninth overall by the Cubs in 2011.

2. Kris Bryant (from Cubs to Giants)

Yes, that’s four former Cubs in the top 7 of this list, an epic trade-deadline punt by the 2016 champs. Bryant was the last and biggest star to be traded, going to the first-place Giants just minutes before the deadline, and he already has a homer for his new team. Bryant starred for Bonanza High School in Las Vegas before playing in college at the University of San Diego. He was considered the best hitter in the 2013 MLB draft and went to the Cubs at No. 2 overall.

1. Max Scherzer (from Nationals to Dodgers)

Trea Turner has been the better player this year, but Max Scherzer is Max Scherzer, so he has to be No. 1. The Dodgers hope to get the Mad Max they saw beat them and everyone else as the Nationals won the 2019 championship. The three-time Cy Young Award winner and eight-time all-star played high school baseball for Parkway Central High School in Chesterfield, Missouri. After starring for Missouri in college, the Diamondbacks took Scherzer 11th overall in the 2006 draft. Scherzer makes his Dodgers debut tonight against the Astros.