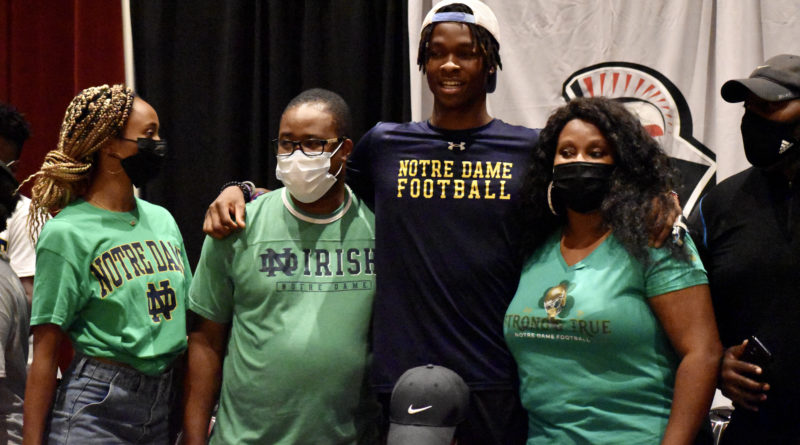 Highly-touted receiver Tobias Merriweather announced his commitment to Notre Dame on Wednesday afternoon in a ceremony at Union High School (Wash.), which streamed live on television and his personal instagram account.

The 6-foot-4, 185-pound wideout is a four-star recruit and the No. 75 ranked class of 2022 prospect in the country, according to 247 Sports. He held offers from every Pac-12 school, as well as Tennessee and Oklahoma, among others. He took official visits to Notre Dame and Stanford in June.

“The biggest thing for me was coaching staff, me getting along with him, having the same vibe,” he said of Notre Dame coach Brian Kelly and his staff.

“He’s worked really hard, I’m super happy for him,” Union football coach Rory Rosenbach said. “I can’t wait to watch him do his thing. I just think he has the right mental makeup. He’s a mature young man who understands that the real work is about to start. You get (to college), and it’s real.”

Perhaps his most formative time in the Titans program was when he was pulled up to varsity as a freshman, during the team’s undefeated season and run to a program-first 4A state championship in 2018.

Unafraid to compete at a young age, driven by a desire to develop into a leader on a perennial state power, Merriweather studied the way they worked and how the team leaders approached their role every day.

Now, he considers himself the top route-runner in the nation. “No one can run better routes than me,” Merriweather said in March. But to understand how he developed into a nationally sought prospect takes rewinding to his freshman year of high school, when he played his way onto a varsity team that won his school’s first state football championship.

No matter how much he hoped, Rosenbach figured he might not be able to keep Merriweather off of varsity as a freshman.

In his first game on the freshman team, Merriweather, — whom Rosenbach knew as the gifted, lanky younger brother of Union’s twin track stars, Dai’lyn and Jai’lyn Merriweather — accounted for a passing touchdown, receiving touchdown, a kick return and a near-pick-six.

After the first few games, Merriweather began practicing with Union’s most talented varsity team since the school doors opened in 2007. Rosenbach’s intent was for Merriweather to watch the level Victor, Chase and Siofele trained at, how they carried themselves and the standard they set for others.

“That was our intention, to hopefully give him a platform to see that happen so he could begin to do those same things when he was an upperclassman,” Rosenbach said.

Victor was a natural receiver, and now plays slot for Nick Rolovich at Washington State, but he was Union’s quarterback, partially out of necessity.

Victor, the Associated Press 4A State Player of the Year, was playing scout team quarterback during a practice in the middle of playoffs, and he recalled launching a deep ball to Merriweather. As it left his hands, Victor was convinced he overthrew his speedy freshman receiver.

“I’m watching the ball turn over and I see this long, lengthy kid running right under it,” Victor said, “and at that moment, I’m like ‘yeah, he’s like that.’ ”

In Merriweather’s mind, each day was an opportunity to prove he belonged at that level, with a group consisting of several Division I football players. He saw the field as a freshman, playing defensive back and receiver. He caught two passes for 33 yards and logged 12 total tackles.

Now, as a senior, Merriweather is in Victor and Chase’s position, leading a team with state title aspirations.

In their one season as teammates, Merriweather’s ability to listen to instruction, attention to detail and refusal to back down from Chase, then a four-star Nebraska-bound wideout, in practice every day (“to not say anything and take mental reps for a year,” Victor said.) left a more lasting impression than his freak athleticism.

A proud leader and ambassador of the program, Victor felt he was leaving it in good hands with Merriweather.

The Titans went 14-0, including two comebacks against Puyallup and a 52-20 thrashing of Lake Stevens in the title game. Merriweather saw time at receiver and defensive back.

“Typically when you win, you have a good time,” Rosenbach said, “but I think he had a good time, he learned a lot and hopefully it helped him get where he is.”

Added Victor: “That kid has lights out speed. You can’t practice that speed. But wherever he goes, they’re getting a kid who wants to learn and who coaches want to coach, and that’s hard to find at the next level, because it’s a little different.

“He’s grown as a player and we’ve seen him do some ridiculous things, but I’ve yet to see his best ball. And that’s just the scary thing.”

Speed is Merriweather’s biggest separator on the football field, and it’s long been honed on the track.

As a middle schooler, he watched his older sisters, Jai’Lyn and Dai’Lyn Merriweather (now sprinters at Oklahoma), win multiple state track championships in the 200 and 400 meter race,  respectively, along with several relays.

In the spring, Tobias Merriweather won district titles in the 100 (10.95 seconds), 200 (22.01) and 400 (49.78), while simultaneously in the middle of basketball season because of the pandemic-shortened nature of high school sports seasons in Washington.

His father, Dom Merriweather, is Union’s sprints coach and always made sure his son knew he could have a future as a sprinter, too.

“I’ve always loved football,” Merriweather said in March. “Since I touched a football, it’s been what I want to do. I’m grateful to have somebody let me do what I want to do, instead of what he loves, which is track.”

Merriweather considered Oregon among his final schools, but stressed he didn’t feel like he owed anything to those schools — Washington and Washington State included — solely because of proximity, pushing back against a common theme where some members of college fan bases will criticize in-state recruits who go to college out-of-state, or across the country.

“I just want to go to the best place for me, where I can get to where I want to go in my future,” Merriweather said in March, “whether that’s here, three hours or six hours away, over in Oregon, across the country.”