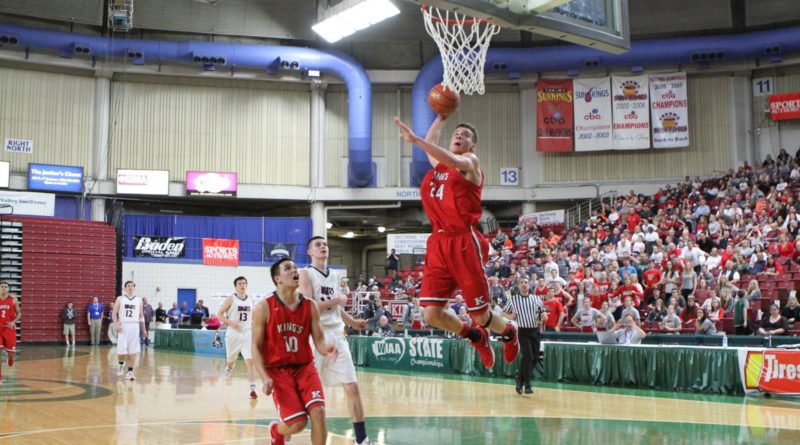 Blake Mellema sat idly in an ice bath, leaning hard into his quick recovery as he watched film. It was the 2015 Class 1A state tournament, and after advancing through two grueling rounds in as many days, he had a championship to prepare for on short notice. Time was of the essence.

But nerves were setting in. It was March, Lynden Christian was set to face a loaded King’s High School team the next day in the Yakima SunDome’s final showdown and Mellema had the team’s most important defensive assignment: stopping highly-touted forward Corey Kispert.

“I texted my dad before that game and told him and he got all excited, because we’re competitive,” Mellema, then a senior, said. “Everyone knew how good (Kispert) was. Everyone knew how high he could jump, how fast he was. I told the guys, ‘Hey, this is my assignment. Don’t count on me for many points. Our No. 1 job is to try and make sure he doesn’t score too many points.’ ”

Kispert was well on his way to writing his legacy as one of the most dominant players to play on Washington’s 1A high school stage.

He was a three-time Associated Press first team all-state selection and the 1A state player of the year in 2016, averaging 23.9 points, 6.8 boards, 3.4 assist and 2.3 steals per game as a junior, overcoming everything from defenses hellbent on slowing him down to a harrowing team bus crash on the way back from a district title game.

The four-star and No. 5 ranked recruit in the state as a senior, Kispert led King’s to two state titles, and had the Knights well on their way to three-peat as a senior until he suffered a season-ending injury.

In his four years at Gonzaga, he developed into one of the best college basketball players in the country, leading the Zags to the 2021 national title game, becoming the country’s most accurate shooter and an Associated Press first team All-American.

Now, after a decorated college career, he’s a projected lottery pick in the 2021 NBA Draft, which begins Thursday at 5 p.m. He’s set to become the first King’s High School graduate picked in the NBA Draft.

SBLive spoke with opposing coaches, players and a classmate of Kispert’s during his run at King’s High School. Those who came across him, at King’s and elsewhere, said that his impact on others stretched far beyond the basketball court.

Kispert had a knack for winning people over with his character.

“I think that’s what makes Corey so special,” former King’s standout Will Pohland, who was in middle school during Kispert’s high school run, said. “He’s obviously a great basketball player, but in terms of his legacy at King’s and why everyone talks about him so much is because he’s a super good person … he’s a servant leader from the start and people have so much respect for him.”

Kispert doesn’t just have those in his corner believing in him. He also has former opponents rooting for him.

“It was fun to watch him dominate at a Division I level and get ready to be a potential lottery pick,” Mellema said. “I mean, that’s just a phenomenal thing to watch. I’m one of his biggest fans.”

Ever since Kispert left King’s High School for Gonzaga, a line of questioning can be expected for any up-and-coming basketball player walking the halls of the private K-12 christian school who shows even a flash of promise.

Are you the next Corey Kispert?

Pohland has heard those comparisons fly around at as high a volume as Kispert’s 3-ball — whether directed at him, his teammates Jordan Hansen and Tyler Linhardt, or now highly-touted incoming freshman guard Cam Hiatt.

To students and those associated with the program, it’s one of the many ways Kispert — who Pohland described as a “celebrity” who “towered over everyone” — has left a lasting impact at the school.

But for Skeen, who took over the program in 2011 when Kispert was in middle school, the moment that defined his high school career took place in his office.

To Skeen, the moment was more impressive than Kispert’s two state championships, or his long list of accolades. More pronounced even than the aftermath of the Knights’ team bus rolling on its side on the way back from a district title game in 2015, which sent multiple players to the hospital and inspired the documentary “Saved for a Reason” — the Knights’ slogan on its ensuing run to the state title.

It was early February 2017 and King’s was the heavy favorite to win its third 1A state championship in a row.

“We were chasing our third gold ball in a row,” Skeen said, “and ‘three-peat’ was our mantra. That’s how Corey wanted to go out with his guys.”

Kispert was averaging 25 points per game, until he was sidelined with a foot injury.

Initially, the injury wasn’t thought to be season-ending.

Kispert tried to return, but heard a pop in his foot in practice as the team was preparing for the district playoffs. A doctor’s visit confirmed their worst fears: Kispert suffered a Jones fracture, dealing a significant blow to the Knights’ hopes of a storybook finish.

Not long after, Kispert hobbled into Skeen’s office on crutches with a serious look in his eyes.

Skeen was floored. Now, more than four years later, he remembers the conversation with precise detail. It was maybe the best coaching pep talk he’d ever received. And it was coming from his 17-year-old team captain.

“The kid should have been devastated, if he was human,” Skeen said. “But he was all about coaching his coach. And he just said ‘we’ve got enough, and I’ll do everything I can, but it’s got to come from you.’ ”

Without Kispert, the Knights were led by a cast of role players — many of whom Kispert had played with since fourth grade.

King’s reached the semifinals, where it lost to Freeman, 43-34. The Knights went on to beat Lynden Christian in the third place game. Throughout the entire run, Kispert could be seen dressed up in formal wear on the sideline, hopping around in a boot, pulling teammates aside and cheering the group on.

“For that month, he was the best assistant coach I’ve probably ever had,” Skeen said, “and that’s no disrespect, because I’ve had and I have had some amazing coaches, but he willed those guys to believe they had a chance.”

In 2016, the game that drew the most attention in the 1A state tournament took place at noon on the first day. Zillah (23-1) and a Kispert-led King’s (21-3) group were understood to be the state’s two best teams, and due to the soon-to-be changed tournament seeding rules, they happened to be matched up on the first day.

Leopards coach Mario Mengarelli was an assistant coach under Doug Burge then. He scouted the Knights laboriously, but game film couldn’t prepare him for seeing the 6-foot-6, 200-plus pound Kispert walk out for warmups.

“True Division I players just look kind of different, especially in 1A,” Mengarelli said. “I couldn’t believe how big he was. Not just his height, but his frame, the size of his neck and shoulders. As a coach I’m like ‘oh my god, we’re in trouble. This guy’s enormous compared to our guys.’ And we were tough that year.”

Zillah, a perennial 1A power, had won it all in 2014 and been in three of the last five state title games. And from the outset, the Leopards jumped on King’s in front of a packed Yakima SunDome. Zillah led by five with just over a minute left, when Kispert scored six points, including a game-tying 3 with 22 seconds left, grabbed three boards and assisted on the game-winning layup as time expired.

“We had them on the ropes, and then Corey just flipped the switch and took over,” Mengarelli said.

Mengarelli, a 32-year-old Zillah native, swears Kispert is the best player he’s seen in his two decades watching the 1A state tournament.

His size is often the first thing people bring up when they see him in person.

“It seemed like he already had an NBA body when he was 13 years old,” former Lynden Christian coach Roger DeBoer said.

Skeen and his assistant coaches trekked across the country to Indianapolis to watch Kispert in the Final Four in late March.

They were sitting in the stands at Lucas Oil Stadium when Gonzaga guard Jalen Suggs hit the shot of the year — a half court game-winner to beat UCLA at the buzzer. They were there, too, when the Zags were dismantled by Baylor in the national title game.

On Thursday, the staff will be together for an NBA Draft watch party to see where Kispert is selected, which some mock drafts posit could be as high as No. 10 overall.

“Anything but the Lakers,” Skeen joked, “I’m a Blazers guy, I can’t do the Lakers.”

At least one of Kispert’s high school opponents will be cheering him on, too.

In the 2015 state title, King’s went on to win, 45-40, the first of two straight state titles. But the Knights were held to a season-low point total, and Mellema held Kispert, who was some five inches taller, to eight points.

Mellema may have won the battle, but Kispert and the Knights won the war.

Mellema’s bitter feelings toward Lynden Christian’s 2015 state title loss to King’s subsided in the years since. In their place are fond memories of his team and its run — and the time he held a now-projected lottery pick to single-digit scoring.

After graduating from college in the midwest, Mellema, now 25, moved back to Lynden, where he got married and works as a field engineer for a general contractor in Bellingham.

When he watched the Zags play in the NCAA Tournament, friends would bring up the 2015 state title.

They would say “ ‘Oh, I remember when you had to guard him and held him to eight points,” Mellema said. “Some fun and joking like that.

“If I’d tried to guard him when he was a senior in high school, I don’t think the outcome would have been the same. He’s gotten so much better every year and he works so hard on his craft. It’s pretty phenomenal to watch him grow.”