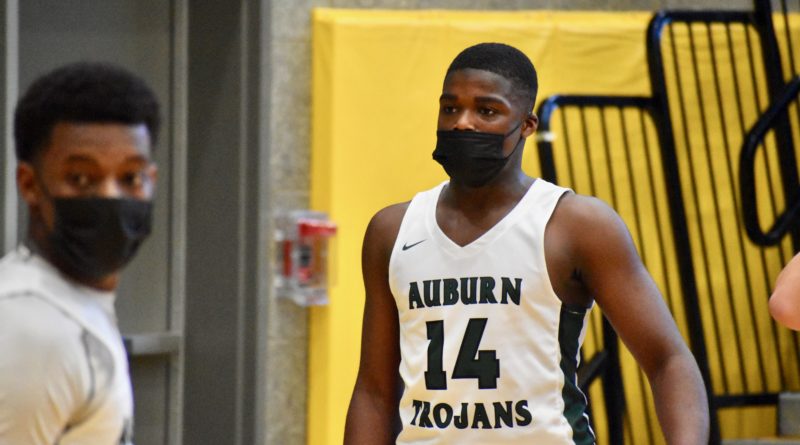 Over the past few days, when this SBLive reporter mentioned a visit to watch the talent-rich Auburn High School Trojans play Bellarmine Prep in a non-league game, boys basketball coaches and athletic directors nearly followed the same script as a response.

“And who is this ‘Baby Zion’ I keep hearing about?”

Well, there is a teenager roaming the court with that Zion Williamson-showcase moniker attached to him. His real name is Luvens Valcin, a ninth grader. And he’s been a known commodity in AAU circles as a Rotary dunking dynamo.

“That is my brother right there,” said Blassingame, two years older but obviously a big fan. “I love that guy. For sure, he is ‘Baby Zion’ – but he has more game than that. He is more than a dunker.”

So why the comparisons to the NBA second-year player with the New Orleans Pelicans? Consider:

*Their abilities to outjump anybody and everybody are rarely seen. And they do damage as scorers, rebounders and yes, dunkers when their heads are above the rim.

*Off the court, they are as approachable and personable as can be.

“The ‘Baby Zion’ (nickname) came around in eighth grade,” Valcin said. “That is when I was really jumping out of the gym … and I got my name noticed out of Auburn.

“They started calling me ‘Baby Zion from Seattle!'”

And he put an exclamation-point stamp on that nickname when he had five dunks in an AAU game at Rainier Vista in Seattle last fall.

“I was open, and had crazy dunks – five of them,” Valcin said. “And coach told me it was too much, so he took me out of the game.”

Even in a loaded Auburn lineup, coach Ryan Hansen has found extended minutes off the bench for Valcin, who had a dunk in his first varsity game Tuesday against Auburn Riverside.

“It’s a great opportunity to jump out of the gym,” Valcin said, “and get one.”