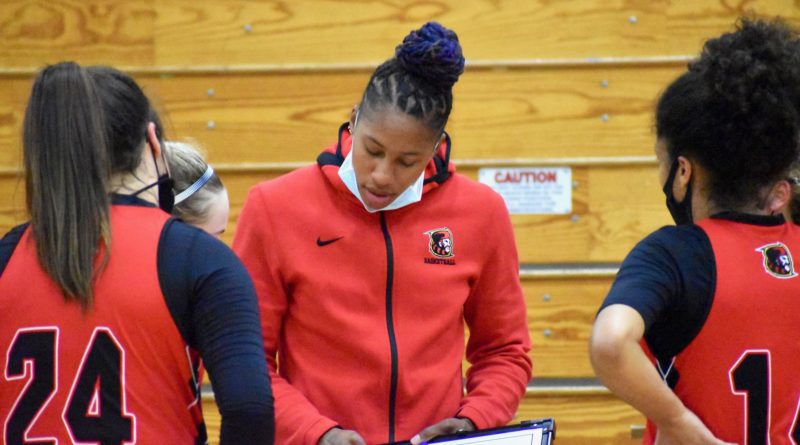 Alex Montgomery still tells you a lot with her firm, steely scowls.

The Tacoma native was born to be in basketball court battles, and carved out a fantastic playing career – first as a league most valuable player at her metro Lincoln High School, then as an all-Atlantic Coast Conference nod in college at Georgia Tech and finally highlighted by a run at the highest professional level in the WNBA as a 2011 first-round pick.

Now retired, Montgomery no longer has a basketball in her hands. It has been replaced by a grease board.

And she is doing the game-planning, skill-building and – yes – yelling as the girls coach at Steilacoom High School, which is located in the same county (Pierce County) where she grew up.

“The whole plan was once I got done, I wanted to teach the youth what I know,” said Montgomery, minutes after her Sentinels dropped a league game at Fife High School. “I knew I could not play forever … so I figured, ‘Don’t be selfish, give back to your community.'”

Back in 2016, the 6-foot-1 veteran was still regarded as one of the better defensive-rebounding combination guards in the WNBA.

She had just finished her second season with now-defunct San Antonio when a high school boys basketball coach she knew suggested she get into coaching during her offseason.

“I never thought of it,” Montgomery said.

She applied for the opening at Steilacoom, a smaller Class 2A school with no real basketball tradition – and was promptly hired.

The Sentinels won eight games in her first season before posting a winning record – 12-11 – and making the playoffs in her second year (2017-18).

Last season, though, the school endured a heavy string of injuries, and posted a 1-18 record.

“That was super tough,” Montgomery said.

This spring, the Sentinels are a young pack, led by ninth grader Isabella Brady. Montgomery has had to do more daily instruction.

“I am teaching basic basketball,” Montgomery said. “It is 2A (level), so girls still dribble with their head down. They still travel. They don’t know the triple threat of pass, fake and jump stop. They cannot go to their left and right and shoot.

“I am still teaching those things every single day. It is fine. We are taking baby steps.”

When asked of all the coaches she’s had over the years, which ones show up most prominently in her coaching style, she named two men – high school coach Kevin Strozier and New York Liberty coach Bill Laimbeer.

“With Strozier, it is the intensity and being aggressive all over the court,” Montgomery said. “And with Bill, it’s his sarcasm, sort of like, ‘Hey, you gets As and Bs in school, right?’ Well, use your brain here and be smart!'”

With her lean, athletic gait and ability to digest basketball at a fast rate, Montgomery could still be playing professionally. She is only 32.

But after she was in Chicago’s camp in 2018, she decided to step away and retire, admitting the “politics” of playing time led her to a hasty departure.

“I lost the love for basketball,” Montgomery said. “I thought I’d just rather go coach basketball than sit on the bench. At that point, I didn’t care about the money.”

But it is obvious now she is taking great fulfillment in teaching teenagers how to play the game – and down the line, hopefully how to win consistently.

“I am happy where I am right now,” said Montgomery, who also founded a basketball academy in her home city for girls in third grade up through high school. “In the end, yes the goal is to win a state title. But it is a process, and now I have realized that. It can be stressful at times … but it has also been a lot of fun.”