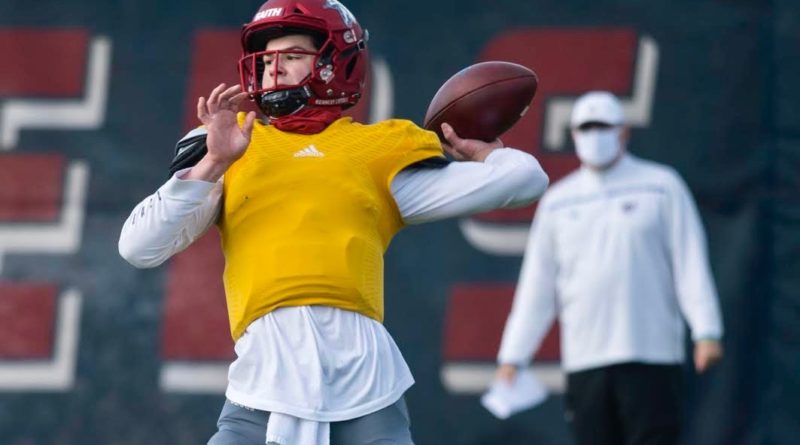 Sheldon Cross views it all as a serendipitous stroke of genius.

An Air Raid disciple from his college football-playing days, Cross happened to take over the head-coaching job at Kennedy Catholic at just the right moment.

A year into it, he happened to come across three classmates – quarterback Sam Huard, and wide receivers Junior Alexander and Jabez Tinae – at the most opportune time as ninth graders.

On Saturday, second-ranked Kennedy Catholic plays 4A NPSL rival Kentwood in what very well could be this trio’s final high-school game together.

If Huard decides to enroll at the University of Washington early – many close to him expect that to happen – he gets one final shot at the mark in this game.

Alexander and Tinae certainly will help him get there: The two senior wide receivers have combined for 7,267 receiving yards and 80 touchdowns, which accounts for more than half of Huard’s gun-slinging production.

“We would say, and want to believe – this has been a perfect match,” Cross said. “It happens to be the right group of people together at the right time. It was all meant to happen.”

When Cross was set to graduate as a quarterback from Stadium High School in 1999, he had watched the Air Raid offense, largely popularized by Mike Leach and Hal Mumme, percolate around college football. But he did not fully grasp the ideology.

It wasn’t until he was on a recruiting trip to Iowa-Wesleyan that it was explained to him by then-offensive coordinator Gary Goff. In one short weekend, Cross became a believer in the pass-heavy offense.

“It is common-sense football,” Cross said. “If a guy is up tight, we go deep. If this guy is playing deep, we go short. If he plays inside, we go outside. If he is outside, we go inside.

“We take the easiest way to complete a pass.”

When Cross was hired to replace longtime coach Bob Bourgette in 2016 at Kennedy Catholic, it meant a drastic shift in offensive philosophy was coming. Bourgette ran the Wing-T offense at the Burien school for 44 seasons.

At the same time Cross was establishing a new order at Kennedy Catholic, these three teenagers were tearing it up on the 7-v-7 circuit – as eighth graders.

Huard, the son of NFL quarterback Damon Huard, was all but set to go to Eastside Catholic. He had grown up playing in the school’s feeder program.

But after his uncle, Luke – then an offensive coach at Georgia State – suggested he visit the Kennedy Catholic campus, Huard and his mother did.

“Coach Cross had a (UW) Husky replica helmet out, and said, ‘If you come here, I will get you there (with the Huskies),'” Huard said. “I watched the tape of the offense and thought, ‘This is a quarterback’s dream.'”

On the way home, Huard told his mother he wanted to enroll at Kennedy Catholic.

Meanwhile, Tinae went through the school system in Burien, and was expected to come to the Lancers all along. He had also played on Huard’s eighth-grade squad at Ford Sports Performance (FSP) at a tournament in California.

“He had me at running back, and would motion me out and run a simple corner route,” Tinae said. “He would keep throwing it to me. I knew then I wanted him to be my quarterback.”

Alexander, who grew up in Puyallup, was the latest addition after considering enrolling at Life Christian, Eastside Catholic and O’Dea.

“When I found out Sam was accepted, I knew Kennedy would be the spot,” Alexander said.

The three were all in the starting lineup for the 2017 season opener against Seattle Prep at the WIAA showcase “Emerald City Kickoff Classic” at Husky Stadium.

“I remember Junior putting on a show and talking to the camera,” Huard said. “(Tinae) caught a touchdown in the corner. … I had some butterflies, but I was fired up.”

And thus, the slow climb to greatness began.

All parties involved, including Huard and Cross, point to the final game of that first season – at 42-32 loss at Bellarmine Prep – as a next-level turning point in their development in the Air Raid.

It was the first time Huard had eclipsed 500 passing yards in a game.

“For some reason, we were kind of clicking in that game,” Huard said. “I know we didn’t end up winning, but (we realized) this is how scary this offense can be – and this team can be.

“From that moment on, we just really grew.”

And in the first game of 2018, Huard ripped up Chief Sealth for 552 yards and a state-record 10 touchdowns – with his nine first-half touchdown passes thought to be a national record.

“I was a late bloomer,” Alexander said. “It was the ‘Bez and Sam show (the first year), and I was kind of in the shadow, just making plays here and there.

“Once I got comfortable, I fit right in.”

Tinae said all three of them “have our own strengths … but when you put three people who are really good together, it is even better.”

Cross estimates the three of them have “10,000 hours into this offense” together, and joked they have a Master’s degree in Air Raid football.

The graduation ceremony very well could be happening Saturday.

“We know at the end of the day, we are moving on and going on our own separate paths,” Alexander said. “And there probably will be emotion toward the end (of the game), and we will tell (Huard) we’ll miss him and love him if it is his last game.”