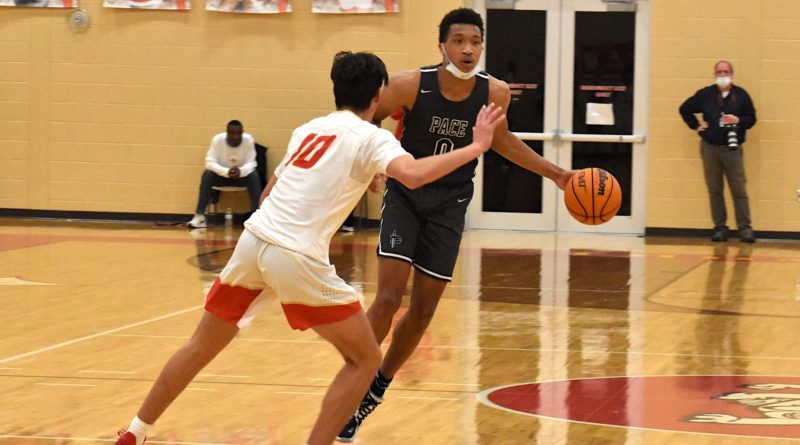 THOMASVILLE – The No. 10 Pace Academy Knights are headed back to the GHSA AA Boys Basketball State Championship after a 56-44 win over the Thomasville Bulldogs in the semifinals on Saturday night. It was the Knights’ 27th consecutive victory.

Their sole loss came in their first game of the season against Sandy Creek – falling 63-59 – but since then, the Knights’ season has gone unblemished on the way to clinching a trip to the Macon Coliseum.

But this Final Four matchup was a close one at the beginning.

The Bulldogs were on fire from three-point range in the opening quarter, with Amarion Banks, Harrison Jackson and Adrian McQueen all cashing in from deep, sending the home gym into a frenzy.

Thomasville held a 14-9 lead with a minute left in the first quarter before Pace Academy’s Logan Baker drained a three at the buzzer to bring the Knights within two.

The teams traded buckets in the second quarter, with the Bulldogs maintaining a slight lead for most of the quarter.

Josh Mininberg knotted the game at 20-20 with a corner three for the Knights before the Bulldogs quickly took the lead back with a three of their own.

With 10 seconds remaining in the first half and the score tied at 23-23, the Knights called timeout to draw up a play for Matthew Cleveland. The play worked to perfection as Cleveland drained a three-pointer from the top of the key to give Pace Academy a 26-23 lead at halftime.

The second half was not as close.

The Knights led from wire-to-wire, extending their lead to double digits for most of the second half. They outscored Thomasville 18-7 in the third quarter, leading by as many as 12 points behind the play of Cleveland, Mininberg, and Cole Middleton.

“We knew one of the biggest things we had to do was guard the (3-point) line because these guys can shoot the basketball,” Knights head coach Sharman White said after the game. “When they did miss, we were able to capitalize on transition to get some easy buckets for the most part.”

The Knights extended their lead to as many as 15 points in the final quarter after a dunk by Cleveland.

Thomasville was able to cut the lead to 10, but it was too little, too late as the Knights held on to improve to 27-1.

“When it is winning time, they know exactly what to do because they play together and understand the system, the process, and winning,” White said. “They showed their senior leadership and experience.”

Pace Academy’s state championship appearance comes a year removed from the Knights winning the 2020 GHSA AAA State Championship over Jefferson before being reclassified to AA.

“It takes character to repeat and from my days at Miller Grove, that’s what it took to win consecutively,” White said. “That’s one of the things we stress to this team. Winning the first one is not as challenging as going back-to-back. I’m proud of the way they performed.”

The Knights will have an opportunity to snag their second consecutive ring on March 11 at 2:30 p.m. in the Macon Coliseum when they face Columbia, a team they beat 67-56 on Jan. 11.