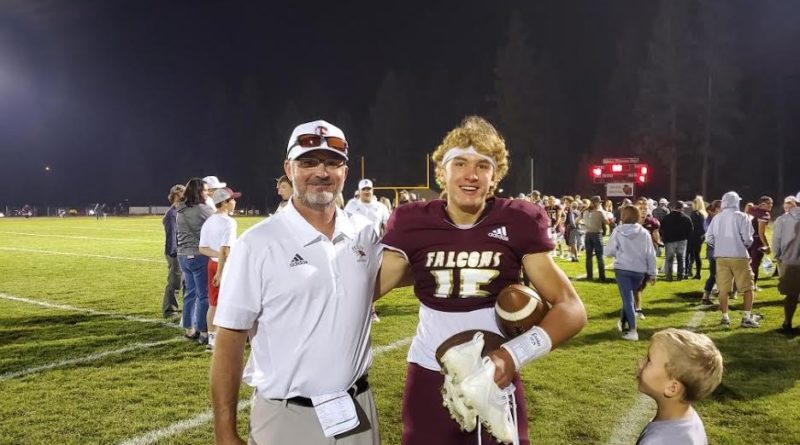 The partnership 16 years in the making began before Pat Duchien Jr. ever picked up a football.

“Growing up, I saw pictures of my dad playing quarterback,” Duchien Jr. said. “I always wanted to be like him.”

To hear his father talk, Duchien Jr. maybe should set his sites even higher. Sure, Duchien Sr. played quarterback collegiately for Montana Western, interrupted by a single year at Linfield College in McMinnville, Ore.

“But, I was a linebacker playing in a quarterback’s body,” said Duchien Sr., who. along with being dad. is his son’s coach at Florence-Carlton High School. “Thank God he’s so much smarter at 17 than I ever was at 20 or 21. He’s just got that level head on his shoulders.”

The son’s mentality is spiked with a fair amount of talent, garnered not only from his father but mom, Christy, a former Montana Western volleyball player. It’s from his mom, Duchien Sr. said, that some needed attributes have passed down.

Dad, son and the rest of the top-ranked Florence-Carlton team hosts Columbus in a Class B quarterfinal playoff game Saturday afternoon, bringing the Falcons within one step of last year’s squad that lost in the semifinals.

It’s two games shy of the goal, of course – a state title appearance that all thought was going to come a year ago.

“Honestly, I felt we should have been there last year,” Duchien Sr. said. “I coached a very poor game in the semifinal and it cost us the game. That’s kind of what we’ve been looking at, and we knew it would be tough again. If Columbus beats us, if they are the better team, then so be it. But we’ve got to not let ourselves get in the way.”

The expectations for this season have caused the father and son a few headaches.

“I think it’s been a little more difficult for us this year,” Duchien Sr. said. “I think we’ve frustrated each other a little this fall.”

At the same time, coach and father do mesh at times to marvel at the son and quarterback’s accomplishments. That opening weekend, for instance, when Duchien Jr. threw for 383 yards and four touchdowns against the defending state champs from Laurel.

Immediately after that performance, dad commented that he expected his quarterback son would eventually eclipse the school record of more than 420 yards in a game before he was done with the Falcons.

“I threw for more than 400 yards one time, in college,” Duchien Sr. said. “He’s still a junior in high school.

“We’ve gotta support our kids. Sometimes I can just sit back and enjoy what he’s doing out there. You have to get to a place as a coach and a dad where they know it’s OK, they are your son, even if they aren’t ‘that’ guy.”

Duchien Jr. is that guy, and wants to be that guy. He’s a three-sport athlete at Florence, playing at guard for the Falcons’ basketball team and as a catcher for the baseball program. But it’s football where his future lies.

“I’ve wanted to play football my whole life,” Duchien Jr. said. “I never want it to end. I do remember growing up, my favorite sport at the time was the sport I was playing.”

Duchien Jr. already knows he has options to continue playing in college once his high school career ends after next season. He’s got an offer in hand from Montana Tech. He believes more opportunities will follow.

Before that, though, he and the Falcons have three more games they hope to play this fall – beginning with the quarterfinals Saturday – and a senior season that will add a wrinkle.

Next fall, Duchien Jr.’s brother, Brody, a slot receiver, will join the Falcons as a ninth grader. Dad, thus, will get seven consecutive seasons with at least one of his sons on the team.

“They are very different people, though,” Duchien Sr. said. “Brody didn’t want anything to do with me coaching him as a quarterback.”

“I feel like that molds me,” Duchien Jr. said. “It’s helped me become the person I’m ultimately going to be.”