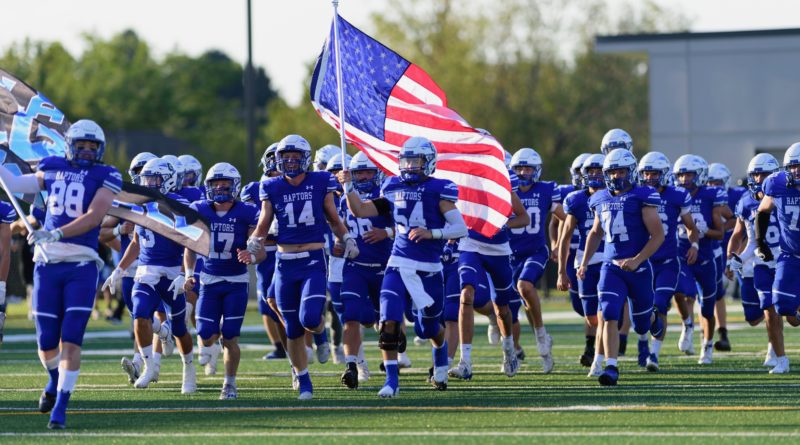 When Hunter Chandler left his defensive coordinator coaching position at Bozeman High School to become the first coach at the new school across town, he may not have known he was starting a trend.

Two years removed from helping to lead the Hawks to the 2019 Class ‘AA’ state championship, Chandler and his Gallatin Raptors are on the eve of the school’s first football playoff game. The Raptors travel to face Eastern Region No. 3 seed Helena in the opening round at 7 p.m. on Friday night.

“I had a really good situation,” Chandler said. “I was never looking to get outside of Bozeman. Then when this job came open, it was just a really good opportunity. You look around, especially at the ‘AA’ level, and I just didn’t know when the next one was going to come. If I didn’t at least try, I’d be kicking myself.”

Chandler knew beginning a new program would have its challenges. First, his team would have no seniors for its first season. That lack of experience showed in Gallatin’s 1-6 record in 2020.

But Chandler and his players knew something else, too.

“We all were so frustrated last year, we all took like 2-3 days off (after the season) and we were right back in the weight room,” Chandler said. “We knew we had some talent. And they’ve all taken some big strides. Last year, obviously, was pretty tough. We got beat up pretty bad. But the kids definitely are better for it.”

The goals for this 2021 season began modestly.

“We knew last year would be a really tough year,” senior tight end Rylan Schlepp said. “The goals for this year began with winning more than one game. And we wanted the opportunity to be in the playoffs.”

The Raptors took care of that first goal in the season’s first two weeks, getting off to a 2-0 start with non-region victories over Big Sky and Flathead, and are 4-5 overall. Despite a tough run over the next six games, including going 1-5 in the West, Gallatin had its opportunity for a playoff berth in front of it going into the regular-season finale against Skyview.

A win and the Raptors were in.

“I think we all were excited,” senior receiver Noah Dahlke said. “We knew it could be our last game if we didn’t perform. We just had to play together to extend our season.”

The Raptors sunk their claws into the Falcons and earned a 49-0 victory that brought the No. 6 seed to the state playoffs along with it. Garrett Dahlke, Noah’s junior brother, threw for 196 yards and five touchdowns in the game.

Of the younger Dahlke’s 22 completions in 29 attempts, a combined 11 went to his older brother and Schlepp. Noah Dahlke caught six passes for 72 yards and a touchdown, while Schlepp contributed five catches for 74 yards and two scores.

The quarterback position continued to be a revolving door this season for Gallatin. When practice began back in August, Garrett Dahlke sat third on the depth chart. But early season injuries to Braeden Mikkelson and Jake Vigen opened up an opportunity.

“I knew Garrett would be able to step up and do the job,” Noah Dahlke said. “We didn’t lose any confidence at all.”

Garrett Dahlke had started two games as a sophomore at the end of last season. But when this fall began, Mikkelson was the incumbent starter and Vigen, the son of Montana State coach Brent Vigen, had transferred in after moving to Bozeman from Wyoming.

“Jake is a pretty good quarterback,” Chandler said. “The battle was between Braeden and Jake, but we felt pretty comfortable with all three of them.”

Mikkelson won the job again. But when he got hurt in an early-October game against Russell, Vigen already was unavailable, having broken his hand earlier in the season while playing on defense.

“It’s definitely crazy, and we wouldn’t have expected it, to be honest,” Schlepp said. “But we’ve had a lot of juniors that have stepped up. We all trust him.”

Garrett Dahlke has rewarded the team by throwing for 961 yards and 16 total touchdowns so far this season,. He’s tossed three scoring passes in each of his past three starts.

With the quarterback position in good hands, the Raptors are focused on this first accomplishment for the school. Gallatin already has its first team state championship after the boys golf team won the title a couple of weeks ago after finishing second in the school’s first year.

“The girls soccer team just made it to state today,” Noah Dahlke said on Tuesday. “The girls cross country team placed third at state. We really try to be there for each other here. We’ve started something pretty awesome at Gallatin.”

Now the football team gets its opportunity against a foe that seems appropriate in some way.

“They’re just a really good program,” Chandler said. “While at Bozeman in 2019, we played Helena in the quarterfinals. This senior group (was) all sophomores, and a lot of them were already starting. You could tell, by the time those kids are seniors they would be a really good group.”

The Raptors certainly aren’t conceding anything, of course. Even if on paper, this first playoff appearance for the school looks like a mismatch with the 7-2 Bengals.

“Yes, those guys have some dudes,” Schlepp said. “We definitely can play with good teams. We just haven’t been able to finish. But everyone has the same record now.”

Win or lose Friday, these Raptors understand the legacy they are contributing to at Gallatin.

“We are leaving a huge impact,” Schlepp said. “And with Coach Chandler, it’s just going to go up from here. It’s about becoming a better, winning tradition.”