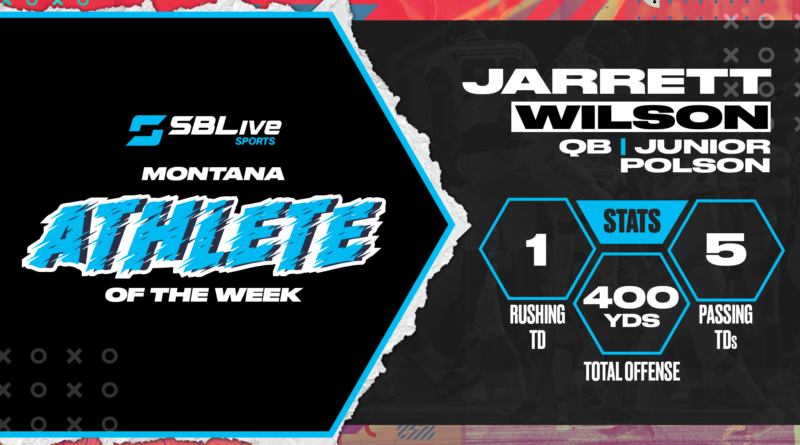 Congratulations to Polson quarterback Jarrett Wilson for being voted SBLive’s Montana High School Athlete of the Week for Oct. 4-10!

The junior threw for five more touchdowns (and ran for another) as he completed an efficient 15 of 18 passes for 301 yards and ran for 99 yards on just three carries in a 42-14 victory over Havre.

Zac Crews, Sentinel QB: Continued to enjoy his senior year at his new position, completing 15 of 22 passes for 220 yards and a touchdown, and added 53 yards and three scores on eight rush attempts in a 35-0 victory over Big Sky.

Garrett Dahlke, Gallatin QB: Junior made his first start of the season in relief of the injured Braedon Mikkelson and completed 17 of 24 passes for 376 yards and five touchdowns in a 42-0 victory over Belgrade.

Noah Dahlke, Gallatin WR: Senior caught five passes from his younger brother for 163 yards and two touchdowns in a 42-0 victory over Belgrade.

Colton Graham, Polson WR: Caught just three passes, but they were for 119 yards and two scores in a 42-14 victory over Havre.

Joey Michelotti, Capital QB: Completed 13 of 19 passes for 199 yards and three touchdowns, and added 38 yards and a fourth TD on seven rushes in a 48-6 victory over Hellgate.

Tristan Pyette, Florence-Carlton LB: Scored three touchdowns – one defensively on a 50-yard interception return and one on special teams with a 76-yard punt return – made two tackles for loss and contributed 63 yards and a TD rushing on nine carries in a 45-7 victory over Loyola-Sacred Heart.

Isaiah Roth, Columbia Falls RB: Ran for six touchdowns as part of his nine attempts that totaled 263 yards, and also hauled in a receiving score in a 81-0 victory over Browning.

Luke Sullivan, Capital RB: Ran for 127 yards in a 48-6 victory over Hellgate.