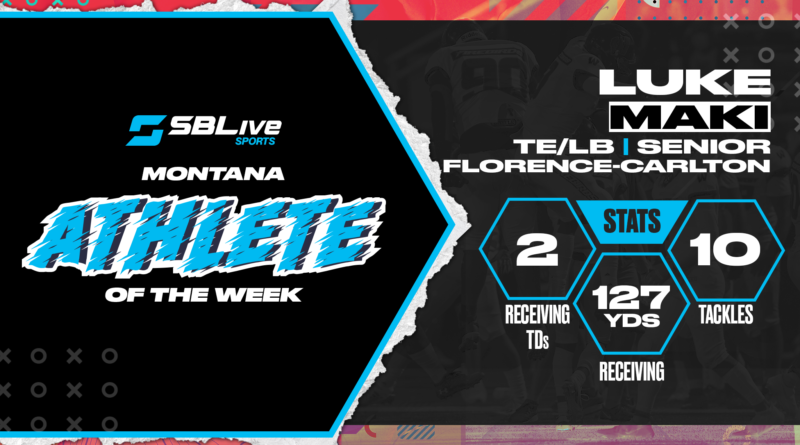 Congratulations to Florence-Carlton TE/LB Luke Maki for being voted SBLive’s Montana High School Athlete of the Week for Sep. 27-Oct. 3!

The senior contributed on both sides of the ball, catching five passes for 127 yards and two touchdowns while making 10 tackles with 2.5 sacks in a 41-15 victory over Eureka.

Maki received 59.92% of the vote, beating out Stevensville volleyball’s Sophie Berning who finished second with 37.07%.

Isaiah Claunch, Billings West QB: Peak efficiency in a performance that saw him completed 13 of 15 passes for 228 yards and five touchdowns in a 63-0 victory over Skyview.

Kaden Huot, Helena QB: Proved to be an unstoppable dual threat in a 48-24 victory over Glacier, running for 149 yards and three touchdowns while throwing for 170 yards and three more scores.

Chase McGurran, Helena WR: Came up big with six catches for 92 yards and a touchdown, plus returned a kickoff 99 yards for another TD in a 48-24 victory over Glacier.

Jackson Simonson, C M Russell RB: Ran for 110 yards and a touchdown on 18 carries in a 36-20 victory over Gallatin.

Mason Sjostrom, Billings West RB: Carried the ball just 11 times for 98 yards and a touchdown in a 63-0 victory over Skyview.

Jarrett Wilson, Polson QB: Responsible for 373 yards of total offense and four more touchdowns, completing 28 of 47 passes for 250 yards and adding 123 yards rushing on 14 carries, in a 37-0 victory over Columbia Falls.

Sophie Berning, Stevensville volleyball: Berning had 41 assists, 8 digs, 4 kills and 3 aces in a 3-1 win over Hamilton.

Kelsey Thurston, Melstone volleyball: Thurston had 14 kills, 10 aces and 9 digs in a 3-1 win over Stanford/Geyser on Sept, 30.