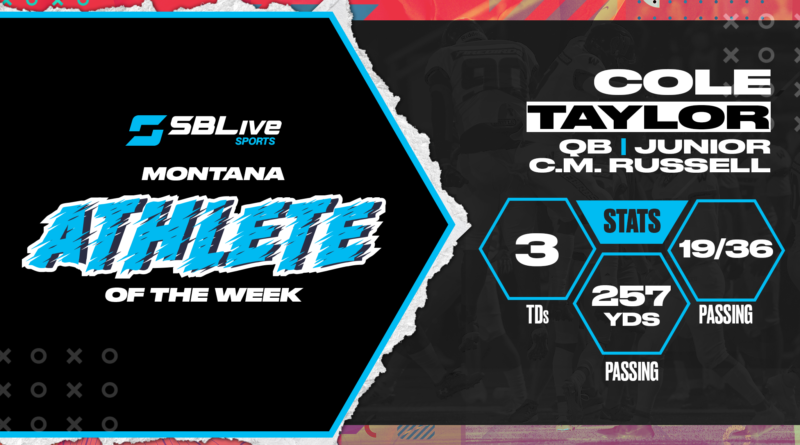 Congratulations to C.M. Russell quarterback Cole Taylor for being voted SBLive’s Montana High School Athlete of the Week for Sep. 20-26!

The junior completed 19 of 36 passes for 257 yards and three touchdowns in a 36-12 victory over Billings Senior.

Quincy Frohlich, Sentinel volleyball: Frohlich had 17 kills and four aces in a 3-1 win over Capital.

Lauren Lindseth, CM Russell volleyball: Lindseth had 26 kills and 15 digs in a 3-1 win over Billings West.

Isaiah Claunch, Billings West QB: Accounted for four total touchdowns, throwing for two as he completed nine of 17 passes for 169 yards, and running for two scores in a 48-3 victory over Belgrade.

Zac Crews, Sentinel QB: Continued to be an all-around threat for the top-ranked Spartans, throwing for 104 yards and a touchdown on six of 13 accuracy passing and adding 123 yards and a second TD on just 15 carries in a 27-6 victory over Helena.

Caden Dowler, Billings West WR: Senior came up big with three catches for 106 yards and two touchdowns, and had a two-point conversion as a wildcat QB in a 48-3 victory over Belgrade.

Xavier Fisher, Polson WR: Caught five passes for 115 yards and a touchdown in a 49-14 victory over Libby.

Colton Graham, Polson WR: The Pirates offense spread the wealth on Friday, and receiver took advantage with five receptions for 103 yards and three touchdowns in a 49-14 victory over Libby.

Adam Jones, Sentinel RB: Carried the ball 18 times for 98 yards and two touchdowns in the 27-6 victory over Helena.

Jake Rendina, Glacier RB: Ran for 100 yards and two touchdowns on 2just 19 carries in a 21-7 victory over Capital.

Jackson Simonson, CM Russell RB: Ran for 118 yards and a touchdown on 22 carries in a 36-12 victory over Billings Senior.

Jackson Walker, Flathead QB: Proved a dual threat with 202 total yards – 87 yards and two touchdowns rushing to go with 115 yards and a score passing – in a 62-38 loss to Hellgate.

Jarrett Wilson, Polson QB: Threw for 354 yards and six touchdowns, his fourth consecutive game with at least six scoring passes, completing 16 of 21 passes in a 49-14 victory over Libby.