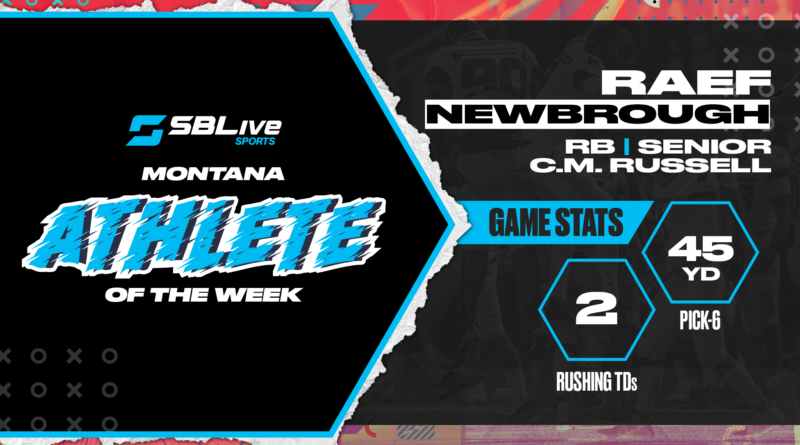 Congratulations to C.M. Russell running back Raef Newbrough for being voted SBLive’s Montana High School Athlete of the Week for Sep. 13-19!

The senior accounted for three touchdowns, rushing for two and returning an interception 45 yards, in a 56-14 victory over Skyview.

Emily Bird, Broadwater volleyball: Bird had 33 assists, 14 digs and 3 kills in a 3-1 win over Jefferson.

Jase Applebee, Bozeman RB: Ran for 109 yards and a touchdown on 18 carries in a 31-0 victory over Belgrade.

Carson Anderson, Helena WR: Caught four passes for 105 yards and a touchdown in a 63-6 victory over Hellgate.

Kade Boyd, Billings Central RB: Carried the ball just 12 times, but had 154 yards and four touchdowns in a 37-7 victory over Havre.

Zac Crews, Sentinel QB: Accounted for 268 total yards for the Spartans, throwing for 157 yards and two touchdowns while running for another 111 yards (including a 30-yarder that put his team in position to take the lead early in the fourth quarter) of a 29-21 victory over No. 3 Glacier.

Kaden Huot, Helena QB: Completed 16 of 21 passes for 320 yards and six touchdowns in a 63-6 victory over Hellgate.

Talen Reynolds, Missoula Loyola RB: Rushed the ball 17 times for 167 yards and three touchdowns in a 39-12 victory over Conrad.

Tyson Rostad, Hamilton QB: Threw for three touchdowns and ran for two more in a 49-14 victory over Butte Central Catholic.

Jarrett Wilson, Polson QB: Threw for 370 yards and six touchdowns, his third straight game with at least six scoring passes, completing 28 of 39 passes in a 62-8 victory over Ronan.