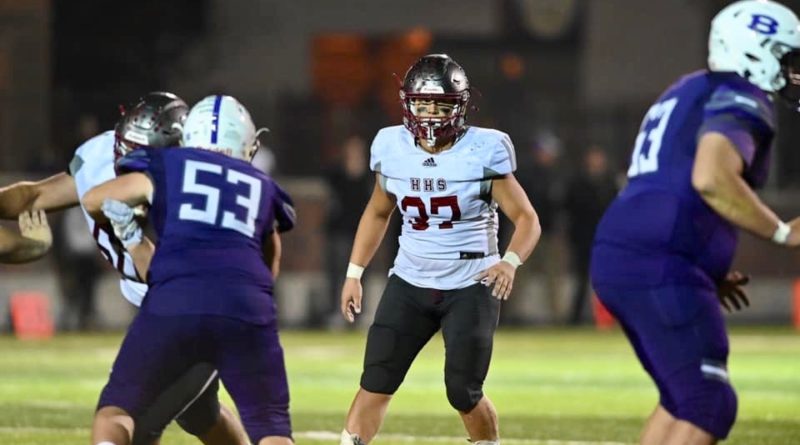 That extra gear – that little bump that fuels competitive fire and spurs potential to become successful – has just always been there for Helena High School’s Marcus Evans.

“He’s been tenacious from the start,” said Helena football coach Scott Evans, who is also his father. “And he had a knack for football. It’s an understanding, really. It makes him a little quicker to the ball, a little faster sideline to sideline.”

The edge may have something to do with his stature.

“He was a little guy as a seventh and eighth grader, but he never quit,” the coach said. “He’s always played with a chip on his shoulder. And he’s always kind of jumped up.”

As a fifth grader, Marcus Evans played up with sixth graders. A year later, despite being smaller, he did the same thing with seventh graders.

The drive could have arisen from those family ties.

The Helena senior’s older brother, Zachary, always was there to provide support and friendly competition. Not to mention dad, who has coached both of his boys throughout their lives.

But he’s going to have to following this season. Soon, dad will become just dad – maybe for the first time he can remember – after he joins his brother at the University of Montana starting next year.

It will also be a little weird for Scott not to have his sons around.

“They would always attend camps in the summer with me,” Scott said. “When I worked in Shrine games, they’d come and work as ball boys. It was kind of our family vacation – we’d go into these big stadiums and hang out. They’ve always been around me.”

For a football coach, It is unusual to have children around full-time. But the two sons feel they are better for it.

The connection between father and son matriculates onto the field as well. Marcus was a second-team, all-state Class AA linebacker as a junior – the position he has been recruited to play at Montana.

Marcus does run the football as a back on offense. But linebacker is his love.

“That might be genetic,” Scott said. “It’s where I played. I don’t know if maybe it’s just that passion for hitting.”

Marcus’ passion extends beyond football to other sports. He still runs track at Helena in the spring.