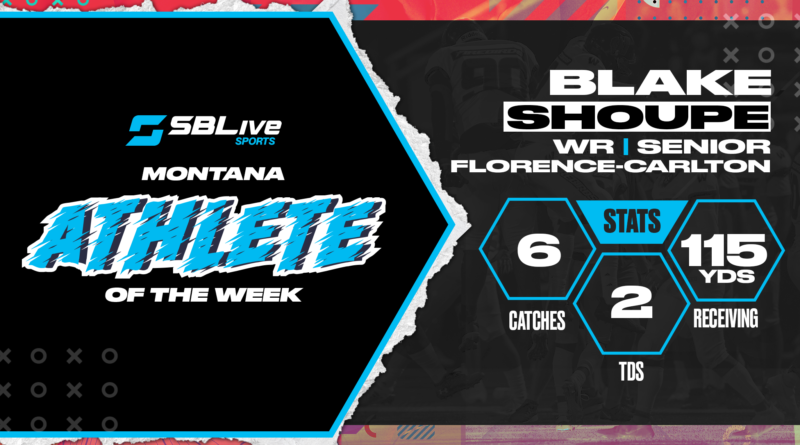 The senior had 115 yards and two touchdowns, making six receptions, in the Falcons 52-0 victory over former No. 2 Manhattan/Manhattan Christian.

Shoupe ran away with this week’s honor, receiving 89.76% of the total vote.

Emily Bird, Broadwater volleyball: Bird had 27 assists and 9 digs in Broadwater’s 3-0 win over Whitehall on Sept. 2.

Kade Boyd, Billings Central Catholic RB: Rushed for 162 yards on 17 carries to lead the Rams in a 17-9 victory over Custer County.

Zac Crews, Sentinel QB: Responsible for 348 of the Spartans 429 total yards of offense, rushing for 165 yards and two TDs on 16 carries and completing 18 of 28 passes for 183 yards and another score in a 34-14 victory over Bozeman.

Michael Deleon, Billings West RB: Ran for 184 yards and a touchdown in the Golden Bears 28-0 victory over Billings Senior.

Taco Dowler, Billings West WR/DB: Had seven receptions for 82 yards and a touchdown, and added a 45-yard interception return for a second TD in the Golden Bears 28-0 victory over Billings Senior.

Pat Duchien Jr., Florence-Carlton QB: Accounted for 437 yards of offense (22 of 30 passing for 383 yards, seven rushes for 54) and five touchdowns (4 passing, 1 rushing) in a 52-0 victory over former No. 2 Manhattan/Manhattan Christian.

Cameron Gurnsey, Butte WR: Caught 11 balls for a game-high 129 yards to help the Bulldogs in their 17-7 victory over Great Falls.

Reed Harris, Great Falls QB: The passing game struggled for the Bison, but the junior led all rushers in a 17-7 loss to Butte with 142 yards on 23 carries.

Caleb Hren, Big Sky QB: Completed 14 of 21 passes for 248 yards and three touchdowns in the Eagles 42-7 victory over Skyview.

Kaden Huot, Helena QB: Accounted for 325 yards of offense by completing 20 of 26 passes for 241 yards, two interceptions and three TDs, while adding 84 yards and a fourth TD rushing in a 28-14 victory over Billings Senior.

Clay Oven, Billings Central RB: The junior complement to Boyd rushed for 144 yards and a touchdown on 26 carries in the 17-9 victory over Custer County.

Body Smith, Whitefish WR: Made seven catches for 112 yards in the Bulldogs 20-14 victory over Frenchtown.