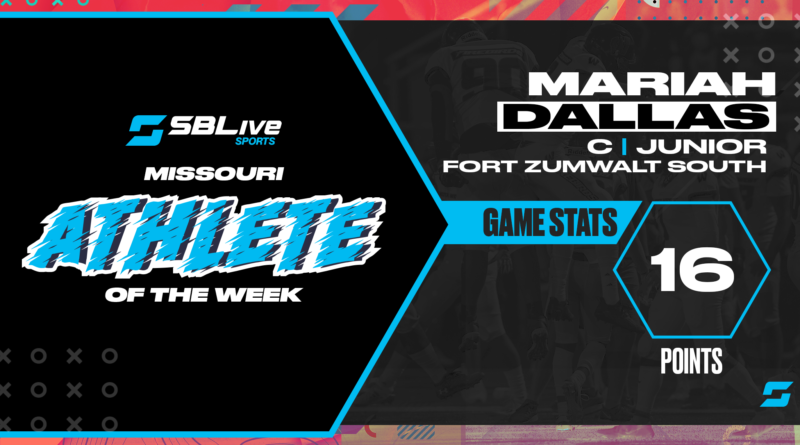 The junior led Fort Zumwalt South’s on the offensive end during a 49-32 win over St. Dominic, scoring 16 points.

Higgins almost notched a double-double during Ursuline’s 49-28 win over Notre Dame, scoring 16 points to go along with nine rebounds.

Chrisco was close to getting a double-double during Holt’s 56-49 win over Timberland, scoring 24 points and grabbing eight rebounds.

The sophomore entered the Hallsville Holiday Tournament with an unblemished record, and he kept it that way with five straight wins for a first-place finish to improve his record to 21-0.

Cook did nearly everything during Park West’s 68-52 win over Francis Howell North, scoring 28 points to go along with three assists and two steals.

Mitchell-Dey was a force to be reckoned with during a 68-53 win over Fort Zumwalt West, scoring a game-high 30 points and grabbing eight rebounds.

Painter had a double-double by scoring 27 points and grabbing 10 rebounds during a 53-50 win over Timberland.

During Francis Howell Central’s 60-41 win over Timberland, Matthews scored 19 points in addition to getting five steals.

Phipps has one of the best scoring outputs on this week’s list, dropping 32 to go along with six rebounds during a 64-50 win over Steelville.

Eisenbels was a crucial part in Crystal City’s 44-31 win over De Soto, scoring a team-high 17 points.

Burch was a sharpshooter during a 50-44 win over Wood River, making four shots from beyond the arc en route to a 20-point night.

The hoop seemed massive for Renz, who scored 27 points while making eight 3-pointers during an 86-82 win against O’Fallon Christian.

Despite a 78-50 loss to Parkway West, Sullivan was a bright spot for Lutheran North by scoring 30 points and going 10-for-12 from the charity stripe.

Nicastro used her time during a 64-55 win over Francis Howell Central to score 26 points and grab nine rebounds.

Allen accounted for at least 41 points during Festus’ 66-37 win over Arcadia Valley, scoring 25 of her own and dishing out eight assists.

Lawrence accounted for more than 30 points during a 65-44 win over Troy-Buchanan, scoring 21 of his own while he dished out seven assists.

Pattonville escaped with a 49-42 win over Collinsville, and Gray was a key part of that with 22 points, seven rebounds and four steals.

Kramer had 22 points to go along with seven rebounds during an 85-56 win over Lovejoy.

Turner notched a double-double with 21 points and 10 rebounds during a 55-54 win over Lift for Life.

McLellan scored a game-high 24 points despite a 42-39 loss to Kirkwood.

Fall did a little bit of everything during a 50-42 win over Pattonville, scoring 16 points, grabbing three rebounds and dishing out three assists.

Aulbert terrorized defenders during a 63-28 win over Timberland, scoring 24 points to go along with 11 rebounds and five assists.

Despite a 60-48 loss to MICDS, Williams nailed five 3-pointers en route to a 27-point performance.

Etchason recorded a double-double during a 78-60 win over Lutheran North with 17 points and 13 rebounds.

Provost, just a freshman, won five consecutive matches by pinfall en route to a first-place finish in the 106-pound weight class at the Hallsville Holiday Tournament.

Baumgartner was a few boards shy of reaching the 20-and-20 club, scoring 24 points and grabbing 17 rebounds during a 63-45 win over Visitation.

Foulke was effective on both ends of the court during Metro’s 59-45 win over Riverview Gardens, scoring 30 points and getting six steals.

Timberland was able to get a 38-26 win over Holt, and Wilmsmeyer scored 23 of the team’s points while adding four assists.

Hagan, a senior, won five consecutive matches by pinfall before a 15-4 major decision in the first-place match to win the 220-pound division at the Red Schmitt Holiday Tournament.