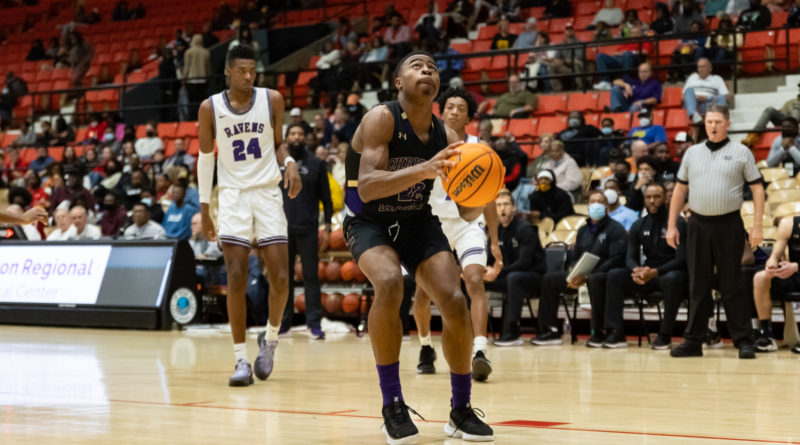 Cane Ridge was the Class AAA Tennessee state runner-up in a COVID-19-shortened season a year ago. The Cadets beat Raymond (Miss.) in the first game of the tournament. Raymond has played in five straight 4A state championship games and was the runner-up last year. CBC’s lone loss was to Beaumont (Texas) United, which was the undefeated Class 5A state champion in Texas last season and has just one loss this season.

The Cadets pulled off the 2-1 mark without senior star guard Larry Hughes Jr. and senior starter Nassir Binion, who didn’t make the trip after testing positive for COVID-19.

“This gives us great momentum,” said CBC coach Justin Tatum, who missed the opener while also dealing with the virus. “It was tougher without [Bolton and Hughes Jr.], but we knew what we had depth-wise, and we had some guys step up.”

The big story in Wednesday’s win was holding Cane Ridge star forward Brandon Miller, a University of Alabama signee, to just 13 points, including a three-pointer that came late in the game when the Cadets had already sealed the win.

Miller, who scored more than 30 points in the first two games of the tournament, was saddled with foul trouble and played only 17 minutes. When he was in the game, he was harassed with a rotation of CBC defenders. He committed three turnovers, including a steal by Justus Johnson in the fourth quarter when Cane Ridge trailed by seven.

“We just wanted to make sure we put some of our better defenders on [Miller],” Tatum said. “We knew he could score 20 or 30 points, but we just wanted him to earn it by playing solid defense. We played good defense, and he had to be accountable out there.”

Robert Martin continued his torrid play with a depleted backcourt with 19 points and four assists.

“We were missing some key guys that score a lot of points, but the other juniors and seniors had to step up,” Martin said. “We are going to be even better with those two guys. We got some other guys playing time, so we are going to go into the conference season and get the job done.”

The Cadets never trailed and led by as many as nine in the first quarter as John Bol scored four of his nine points in the first two minutes.

Miller picked up one of his two assists on a nifty no-look, half-court pass to a wide-open Ja’Lynn Lawrence, who flipped in a layup to tie the score at 31-31 with just under five minutes to go.

But that’s as close as Cane Ridge came the rest of the game. Eric Holmes put in a layup and was fouled. He hit the free throw, and CBC led 34-31. Moments later, Martin hit a jumper to put the Cadets up 36-31 with 3:38 left in the quarter.

Kendal Houston, who scored 11 points, scored in the paint with 2:44 to go in the half to add to the lead. After a technical foul was whistled on Cane Ridge, Martin, who hit 7 of 8 free throws, sank the charity toss and capped a 10-2 run and gave the Cadets a 41-33 halftime lead.

CBC led 48-43 after three quarters but moved the lead back to double-digits after Anthony Gause, who scored eight points, went on his own 5-0 mini run to start the fourth quarter with back-to-back hoops.

Cane Ridge (8-7) never really threatened after that and didn’t cut the lead under double digits until just under the two-minute mark.

Late in the game, Bol recorded one of his three blocked shots, sending the ball into the stands on the sideline. However, in doing so, he re-injured his elbow that he hurt Tuesday while falling to the court. He left the game, but Tatum said he should be ready to play next week.

“Our conference is the toughest in the state of Missouri, but I am going in confident,” Tatum said. “If we play the way we did [in Pine Bluff}, we will be fine.”

In addition to the rugged conference schedule that lies ahead, CBC also will play nonconference games against Kenwood (Chicago), Staley (Kansas City), East St. Louis (Ill.) and Chicago’s St. Rita, among others.

For the second day in a row, the Lions picked up a win and finished tournament play 2-1.

Robert Lewis, who received an offer from the University of Arkansas at Pine Bluff this week, led the Lions with 25 points and 10 rebounds. He was 7 of 8 from the free throw line and added two blocks.

Braxton Stacker chipped in 20 points, three rebounds and three assists. He was 5 of 7 from the field. Clayton Jackson added nine points and two assists.

The Lions (4-5) held the Meteors to 36 percent shooting from the field. They were 38.5 percent from 3-point range.

Meteors guard DeJuan Bates, one of the top players in Chicago, exploded for 36 points on 9-of-23 shooting. It was the third game in a row he scored more than 30 points, but De La Salle (4-13) lost all three games.