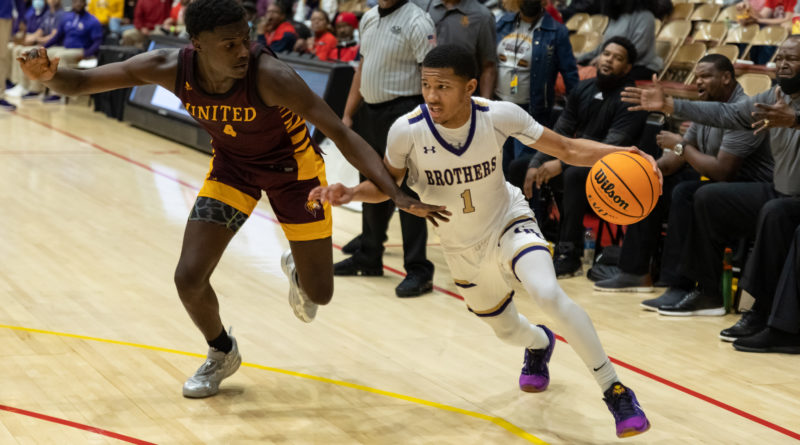 PINE BLUFF, Ark — Christian Brothers College played again without two starters and trailed by 13 points at halftime, but that didn’t stop the team from taking Beaumont (Texas) United, the defending Class 5A Texas state champion, to the brink. CBC eventually grabbed the lead in the second half, but the Timberwolves did just enough to pull out a 67-59 win in the semifinals of the King Bracket of the King Cotton Classic at the Pine Bluff Convention Center.

“We are a championship program,” senior guard Robert Martin said. “We aren’t used to being down by double-digits, but that didn’t bother us. We came out and played hard in the second half.”

While senior star shooting guard Larry Hughes Jr. and fellow starter Nassir Binion are still in COVID-19 protocols, coach Justin Tatum was cleared to return to the bench after dealing with the virus the past few days. He missed the Cadets’ win Monday at the tournament.

“It always feels good to be coaching these guys,” Tatum said. “I didn’t feel winded, and I am not playing anything. [Binion and Hughes} needed extra time to be cleared to make sure they were ready to play. I didn’t need to.”

Tatum added that the pair will be available to play when league play begins next week.

Martin made sure the Cadets would push the Timberwolves in the second half. He scored 20 of his 23 points after halftime. He went on his own 6-0 run to cut the United lead to 36-32 with 4:31 to play in the third quarter.

His 3-pointer with 2:32 left tied the score at 38-38. With just over two minutes to play in the period, Mikhail Abdul-Hamid hit a 3-pointer on the left wing to give the Cadets a 41-38 lead — their first of the game.

The lead changed hands twice more before Abdul-Hamid, who scored 15 points, hit another triple to tie the score at 52-52 at the 1:50 mark. The triple came on a pick-and-roll play with Martin.

However, that’s when United star Wesley Yates, who scored 26 points, took over. He hit a 3-pointer with 1:35 to play to give the Timberwolves a 55-52 lead, an advantage they never gave up thanks to Yates, who scored nine points in the final 1:35.

“They are a great team,” Tatum said. “They didn’t lose last year, and they’ve only lost once this year, and they are on a roll. They know where each other is on the floor, and they made their shots. We wanted to make them uncomfortable in what they were doing, but they found the spots.”

Cardinal Ritter, which led 35-29 at halftime and 55-44 at the end of the third quarter, outscored White Hall, which sits right outside of Pine Bluff, 29-6 in the fourth quarter to break the game open.

White Hall had no answer for Robert Lewis. The 6-foot-8 forward had a distinct height advantage inside and scored 32 points on 13-of-16 shooting and grabbed eight boards. Nashawn Davis added 15 points.

The Bulldogs were led by Jai’Chaun Hayes’ 22 points. He also added five rebounds and three assists.