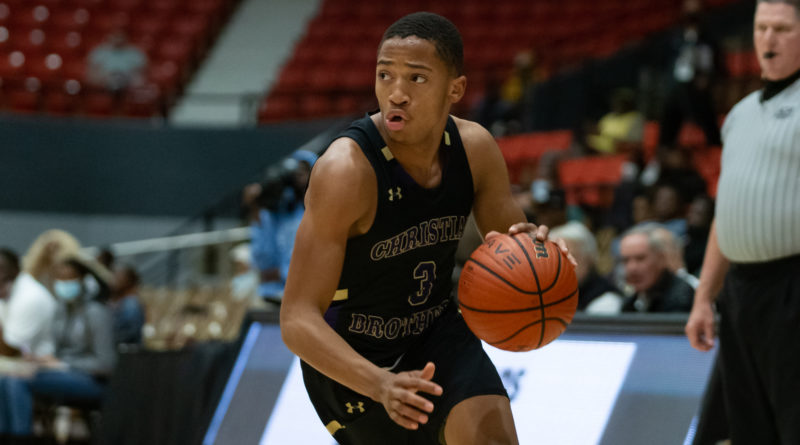 PINE BLUFF, Ark. — Christian Brothers College was without two starters and its head coach but still managed to get past Raymond (Miss.) 63-54 in the first round of the King bracket at the King Cotton Holiday Classic on Monday at the Pine Bluff Convention Center.

“We were down two starters and a head coach,” said Cross, who runs a summer basketball program and is 2-0 now as an interim head coach. “We just had to have the ‘next-man-up’ mentality. We knew we didn’t have a head coach or two starters, so we just had to step up. We are a high-level private school, and several of these guys would average 20 points per game at a public school. We have a deep roaster, but some of those guys don’t always get to play. We had some guys who got extended minutes and stepped up and faced adversity.”

Senior Robert Martin, who is receiving interest from several mid-major Division I programs, shouldered more of the burden, scoring 21 points and dishing out eight assists while collecting four rebounds.

“Rob is a four-year starter for us,” Cross said. “He took us to (the state championship) two of the past three years. He’s a great player and puts in all of the work and deserves what has come to him. He scored when we needed him and dished out some assists.”

Sophomore major Division I prospect John Bol, who stands 7-foot-2, was 7 for 7 from the field and finished with 15 points, 11 rebounds and seven blocks.

“We had him with 10 blocks, so a triple-double,” Cross said. “We got on our guys at halftime and told them that (Bol) was saving their butts and were allowing too much penetration and John was saving them with the blocks. His timing was impeccable. We kid him, saying, ‘Just stay on the ground, you’re taller than everybody.’  He blocked some shots but going 7 for 7 from the field was great, and I was proud how the big fella performed today.”

CBC plays the winner of Monday night’s game between Watson Chapel (Ark.) and Beaumont (Texas) on Tuesday at 4:30 p.m.

“We have got to make some shots earlier,” Cross said. “It will ease a little bit of pressure on us. We are probably going to play a tougher team, so I am looking forward to guys stepping it up. I’m great with guys stepping up and making plays.”

Raymond never really threatened Monday. The Rangers trailed 10-5 after the first quarter and 20-18 late in the first half, but Martin drilled back-to-back three-pointers, including one at the halftime horn, to extend the lead to 26-18 at halftime.

Raymond (9-5) cut the lead to 36-29 late in the third quarter, but Martin hit a three-pointer and Kendal Huston hit 1 of 2 free throws to push the margin to 40-28 at the end of the third quarter.

The lead swelled to 13 with 3:25 to play when Bol notched one of his four dunks.

Raymond cut the lead to 10 with a 1:29 to go on a three-pointer by Keymarius Lewis, but it was too late.

Besides the increased contributions CBC received on offense, it was the team defense that might have been even more important. CBC held Raymond, which has qualified for the Mississippi Class 4A state championship game the past five years, to a frigid 36 percent shooting from the field and 31 precent from three-point range.

“In the third quarter, we could see they couldn’t shoot it real well, and we weren’t making ours, but we knew they would fall,” Cross said. “We saw on film they couldn’t shoot outside, so the zone we were using was essentially what separated the lead. “