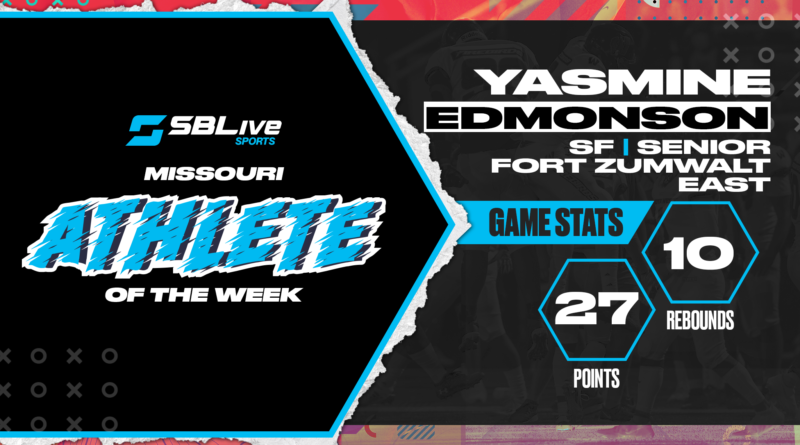 During a 60-48 win over Hazelwood West, the senior scored 27 points and grabbed 10 rebounds for a double-double.

Edmonson received 40.17% of this week’s vote, beating out Eureka’s Kaylee Gross who finished second with 25.87%. Vashon’s Raychel Jones finished third with 9.91% and Fox’s Aubrey Andrews finished fourth with 7.79%. There were over 29,000 votes tallied this week!

Martin dropped a game-high 20 points to lead East Atchison to a 65-29 win over Stewartsville.

One of the highest scorers featured in this week’s list, Howard had 40 points and 12 rebounds despite a 61-56 loss to Capital City.

During a 58-36 win over Mound City, Marriott scored a game-high 19 points for Nodaway Valley.

Edwards dropped 30 points during the Warriors’ 74-58 win over Fort Osage. He added five steals, too.

Maupin was close to a double-double during a 76-49 win over Visitation, scoring 18 points to go along with nine rebounds.

Fuemmeler is one of just two people on this list with a triple-double, and his came with 29 points, 10 rebounds and 10 steals during a 78-31 win over Norborne.

The Wildcats were able to notch a 63-60 win in overtime over Lift for Life, and Gross led the way with 22 points.

Troy Buchanan was able to squeak out a 51-49 win over Fort Zumwalt West, and Ryan totaled 27 points and 16 rebounds to fuel the win.

Gygi had a 20-point performance during Marquette’s 73-62 win over John Burroughs, and that scoring spurt was mostly due to her going a perfect 6-for-6 from 3-point land.

Vick notched a double-double during a 49-28 win over St. Dominic with 16 points and 12 rebounds.

Speiser had one of her best performances of the still-early season, dropping 36 points and four steals in a 58-40 win over Fort Zumwalt East.

Purvey wasn’t going to be denied from finding the bucket during an 87-53 win over Kirkwood, dropping a game-high 36 points.

Brewster lived at the charity stripe during a 51-45 win over Parkway West, going 17-of-18 en route to 29 points. She notched a double-double, too, adding 13 rebounds.

The Cardinals were able to get a 74-43 victory over King City, and Graham led the way with a game-high 29 points.

Horton was able to tally a double-double despite Brentwood’s 37-34 loss to Hancock, scoring 22 points and cleaning the glass for 10 rebounds.

Weekly was key in DuBourg’s 68-55 win last week, scoring 25 points to go along with five rebounds.

Borgia fended off Salem for a 52-51 win, and Patke led the way with an outing that included 19 points and eight rebounds.

Williams was effective on both ends of the court during a 92-89 win over Smith-Cotton, dropping 24 points and totaling six steals.

Lutheran St. Charles got its biggest win of the season with a 73-12 routing of O’Fallon Christian, and Aulbert was able to put up 25 points and eight rebounds.

Enright was a difference-maker during a 70-61 win over Monroe City, scoring 18 points to lead Webster Groves to victory.

Despite a 76-49 loss to Webster Groves, Restovich was one of the bright spots, notching a double-double with 24 points and 10 rebounds.

Wangerin had 23 points and nine rebounds during the Wildcats’ 76-41 win over Parkway South.

Perhaps one of the most impressive defensive performances in Missouri so far, Blanchard led the way with 20 points and nine steals during a 58-2 win over O’Fallon Christian.

Geary has one of the few triple-doubles in the state so far, and he did so with 18 points, 15 rebounds and 10 steals during a 61-19 win over Gate Science Academy.

During a 47-45 win over Affton, Alivernia scoring 16 points and grabbing nine rebounds.

Soldan nabbed an 81-24 win over Metro, and Bonner contributed with 28 points and eight rebounds.

Vashon was able to nab a 70-4 win over Roosevelt, and Jones added to the 66-point margin of victory with a 22-point outing.

Thames dropped an impressive double-double with 34 points and 15 rebounds during a 79-59 win over Jennings.

Nicastro did nearly everything that St. Charles West needed during a 62-38 win over Winfield, scoring 21 points to go along with nine rebounds and five steals.

Meers was nearly perfect from the field during a 68-18 win over Hazelwood East, going 8-of-9 en route to 16 points.

Andrews scored 21 points to go along with five assists, four rebounds and four steals during a 62-42 win over Liberty.

Wayne dropped 19 points during a 59-32 win over Francis Howell Central.