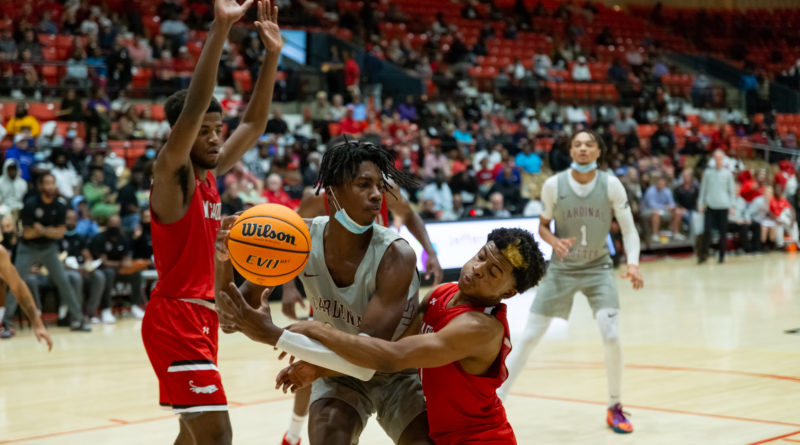 The Lions led the entire game until early in the fourth quarter, when the Panthers, who have won 61 of their past 62 games, took their first lead. Cardinal Ritter briefly took the lead back but couldn’t hang on.

Johnson was frustrated with the foul discrepancy, with his team committing 20 and Magnolia getting whistled for eight.

Arkansas signee Derrian Ford, who is one of the top guards in the country and finished with 24 points, was a beneficiary of a non-shooting foul that put him on the line with Magnolia in the bonus to tie the score with just under three minutes to play.

“The kids play the game, and the adults tend to get involved, and for the referees to get involved the way they did, it affected our kids,” Johnson said. “Consistently, there were calls throughout the game. We were battling at one end, and get called on the other end. I don’t know if it was [Ford] going to Arkansas or what it is, but I don’t know how you expect kids to react to that.”

Johnson said the game will help his team as it builds for a run at three straight Class 5A Missouri state titles in March.

“When we lose, we try to call them lessons,” Johnson said. “Hopefully, we will be able to deal with it better next time, and it will help us down the road.”

The Lions controlled the game much of the first half and frustrated Ford into just nine points and four turnovers.

“[Ford] is a very exceptional athlete, and we tried to keep him in front of us the best we could,” Johnson said. “We did a good job on him.”

Braxton Stacker’s three-pointer with two seconds left in the first quarter gave the Lions a 21-8 lead. Magnolia cut the lead to 30-22 on two free throws by Ford with a minute to go, but Stacker, who finished with 12 points, hit a pair of free throws to make it a 10-point lead going to halftime.

The Panthers began to chip away in the third quarter. Stacker, a Murray State signee who scored 12 points, gave Cardinal Ritter a 40-35 lead heading to the fourth quarter with two free throws with .7 second left in the third.

However, Magnolia began the fourth quarter with a 6-0 run fueled by two buckets by Ford. He capped the run with a steal and layup and gave the Panthers their first lead of the game with 6:28 remaining.

Moments later, Ford, who grabbed six rebounds and dished out two assists, drew a non-shooting foul with the Panthers in the bonus and made both shots to tie the score.

Magnolia took the lead for good when Devonta Walker, who chipped in 13 points and nine rebounds, hit two free throws to give the Panthers a 49-47 lead with 1:51 to play.

“Devonta Walker is a great player, and he showed it tonight,” Ford said. “He made some big plays for us.”

Down the stretch, Magnolia hit four straight foul shots and added a basket at the horn to stretch the lead.