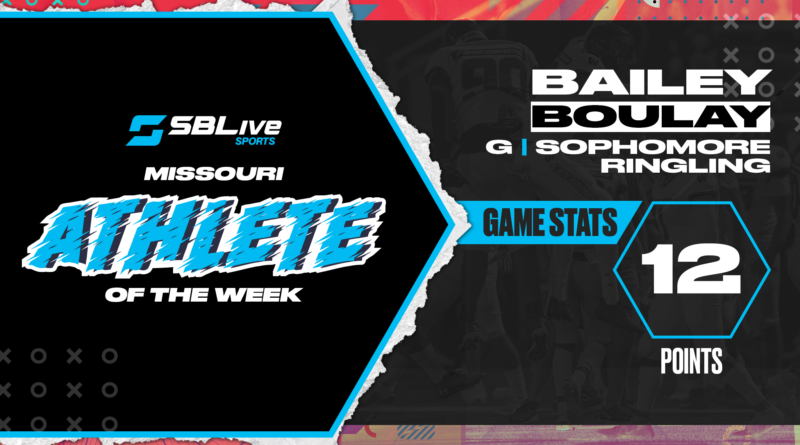 The sophomore guard had a team-high 12 points and hit a buzzer-beating, game-winning shot to give the Wildcats a 47-45 win over Hickman in the Troy Invitational title game.

Boulay ran away with this week’s honor, receiving 68.07% of the total vote. There were over 14,000 votes tallied this week!

Drexel quarterback Jacob Coffey had 336 total yards of offense and six touchdowns during a 48-42 win over Worth County/Northeast Nodaway in the 8-man title game.

The sophomore guard had a double-double during a 54-45 win over Thomas Jefferson School Nov. 30, and he did it by scoring 26 points and getting 11 steals. He also had eight rebounds and three assists.

Klien, a sophomore running back, had two touchdowns and 169 yards rushing en route to the Bulldogs claiming the Class 1 title with a 21-7 win over Marceline.

Wagener, a senior forward, had two shots find the back of the net to go along with a couple of assists during the Ravens’ 5-3 win over Fort Zumwalt West Dec. 3 in Wentzville, Missouri.

The wide receiver reeled in four catches for 118 yards receiving and a touchdown during Lutheran St. Charles’ 33-27 win over Lamar in the Class 2 title game.

Bush, a sophomore guard, scored 17 points and hit a 25-foot, game-winning shot to give the Warriors a 55-54 triumph over John Burroughs in a nonconference matchup.

The junior guard scored a team-high 17 points, which was the second-most in the game, during a 58-54 win over De Smet. The win in the finale of the Troy Invitational marked the Trojans’ first time winning their own tournament since 2005.

Spann has one of the best wideouts in the country with Kevin Coleman, and he made sure to take advantage of that in a 56-0 win over St. Pius X in the Class 3 title game. The quarterback had 204 yards passing and three touchdowns.

Raines, a junior guard, had a game-high 21 points en route to Timberland taking a 67-54 win over Winfield in the title game of the Winfield Tipoff Classic Dec. 4 in Winfield, Missouri.

During the Warriors’ 31-0 win over Hannibal in the Class 4 title game for the program’s first ever championship, Hedgecorth threw for two touchdowns.

Bradley, a senior guard, did nearly everything during a 72-48 win over Christian Academy of Greater St. Louis Nov. 30, scoring a season-high 19 points to go along with 10 assists, nine steals and five rebounds.

The senior guard dropped a game-high 38 points to go along with 11 rebounds, five steals and three assists during a 54-47 win over North Shelby Dec. 4. Pauley accounted for 70% of her team’s points that game.

The Cardinals were able to pull off two massive upsets before taking their 26-21 win over Holt in the Class 5 title game, where the running back had 162 yards rushing and two touchdowns.

Williams, a sophomore guard, dropped a game-high 30 points to go along with eight rebounds and three steals during a 99-81 win over Southern Boone Dec. 2.

Below is one of very few athletes who has managed to drop a triple-double so far, and she did so with 33 points, 16 rebounds and 10 assists during a 70-41 over Chafee Dec. 2. She added six blocks and three steals that night.

Coleman, a senior wideout who is committed to play football at Florida State University, was named Missouri’s Gatorade Player of the Year after being a part of St. Mary’s 56-0 win over St. Pius X in the Class 4 title game.

Walker has been an absolute problem for opposing teams in the post, and the senior center/power forward showed why during a 71-51 win over Linn Dec. 4. He had a game-high 21 points and 18 rebounds while shooting 6-for-9 from the field.

McCowan, a senior forward, had 33 points, 16 rebounds and three assists during a 67-46 win over Fair Grove Dec. 3. She had three assists, a steal and a block, too.

Meyer, a junior guard, was 6-for-10 en route to a 12-point outing during a 77-20 win over Rivers of Life Christian Nov. 29. Meyer also had seven assists, five rebounds and five steals.