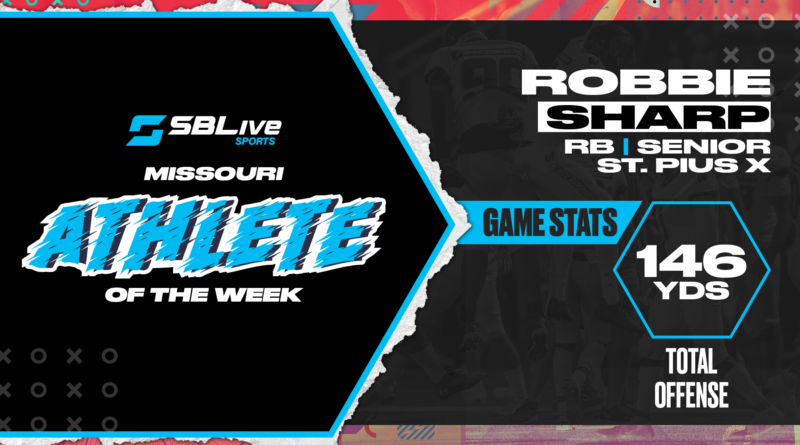 Congratulations to St. Pius X running back Robbie Sharp for being voted SBLive’s Missouri High School Athlete of the Week for Nov. 22-28!

The senior running back accounted for 146 total yards of offense during the Warriors’ 21-20 comeback win against Cardinal Ritter in the Class 3 semifinals, effectively securing them a spot against St. Mary’s in the title game Dec. 4 in Columbia, Missouri.

Sharp received 59.45% of the vote, beating out Marceline’s Hunter Nelson who finished second with 39.58%. There were over 21,000 votes tallied this week!

The senior linebacker was a key part in CBC’s defense forcing six turnovers during a 48-21 win over Liberty North in the Class 6 title game, piling up six tackles, a tackle for loss, a sack and an interception.

Harris, a senior running back who is committed to the University of Stanford, rushed for 123 yards and four touchdowns during Lutheran’s 54-14 win over Lafayette County in the Class 2 semifinals Nov. 27. He also caught five passes for 71 yards receiving.

Moore was crucial toward Holt’s defensive prowess during a 31-14 win over Fort Osage in the Class 5 semifinals, blocking a punt before recovering it in the end zone for a touchdown and later recovering another fumble for the Indians.

Coleman did it all during St. Mary’s 62-16 win over Mexico to punch the Dragons’ ticket to the Class 3 title game. The senior wide receiver had a 48-yard punt return for a score, an 89-yard kickoff return to the end zone, a 73-yard passing touchdown and a 44-yard rushing score.

The running back was one of the main differences between the season being over and living to see another week, rushing for 116 yards and two touchdowns during a 31-30 win over Hayti.

Coffey, a quarterback, has terrorized 8-man defenses this fall with his legs, and last week was no different. He rushed for 382 yards and six touchdowns during a 56-28 win over King City. He was also effective with his arm throwing for his seventh total score.

Klien, just a sophomore, rushed for three touchdowns and returned an interception for a score during the Bulldogs’ 34-6 win over Thayer in the Class 1 semifinals.

Worth County is hoping to make a run toward the 8-man title, and this running back is trying to make sure that happens. Rinehart had 163 yards rushing and two scores — along with a receiving touchdown — during a 36-34 win over North Shelby.

Hedgecorth willed Smithville to a 40-36 victory of MICDS after entering the fourth quarter facing a 16-point deficit. He accounted for four touchdowns (three passing, one rushing).

The running back had four total touchdowns during Hannibal’s 42-26 victory over North County Nov. 27.

Roberts, a running back, carried the ball for 171 yards rushing and two touchdowns during the Dragons’ 62-16 win over Mexico.

Love, a junior running back, had 127 yards rushing and two scores during CBC’s 48-21 win over Liberty North in the Class 6 title game Nov. 27 in Columbia, Missouri.