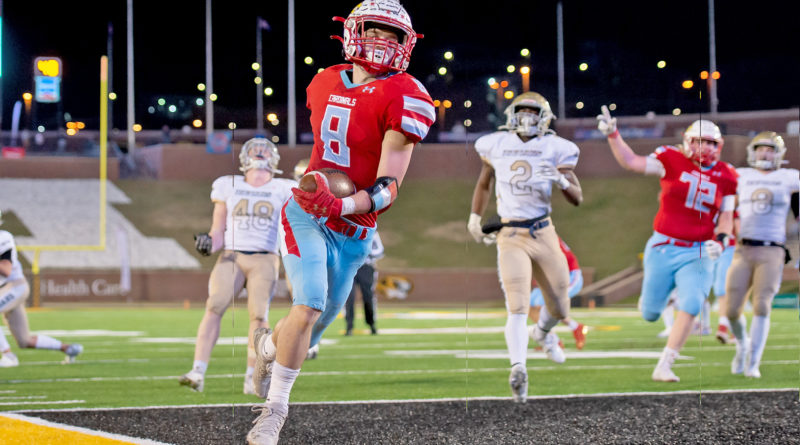 After allowing an early touchdown, Webb City scored the next 26 points and held on as Holt scored 14 unanswered points late in the fourth quarter to defeat the Indians 26-21 as the Cardinals claimed the 2021 Missouri State High School Activities Association Class Five state championship for the 16th time in school history.

The Cardinals now have won the most state titles in the 54-year history of the Show-Me Bowl. The state title game was held at Faurot Field on the campus of the University of Missouri in Columbia, Mo.

“Six to eight weeks ago, we never thought that we would be in position to play in this game,” stated Webb City head coach John Roderique. “No one can see the future, but the one thing we told our kids that it always is what happens in the latter part of the season, and you need to be playing your best football at that time”

Both teams scored on their first possessions of the game as Holt cracked the scoreboard first as Kyle Wuebbeling raced in from 23 yards out to cap off an 11-play drive to give the Indians an early 7-0 lead. The Cardinals answered on their opening drive as Cade Wilson plunged in from a yard out to finish a 13-play drive with 2:13 left in the quarter to even the title game at 7-7.

After Webb City forced an Indians punt at the end of the first quarter, the Cardinals once again scored on an extended drive as Dupree Jackson powered in from three yards out to give Webb City a 14-7 advantage with 7:35 remaining in the half.

Webb City held a 163-125 advantage in total offense with 106 of those yards coming on the ground with Wilson picking up 81 of those yards. The Cardinals also won the time of possession battle in the first half by controlling the ball for over 15 minutes.

The Cardinals started the second half with a 15-play drive that lasted nearly eight minutes with Jackson racing into the end zone from six yards out to extend the lead to 20-7 after the extra point was no good. Webb City pushed the advantage out even farther after forcing a fumble as Wilson scored his second touchdown of the evening with a 13-yard run to give the Cardinals a 26-7 lead at the end of the third quarter.

The Indians refused to go away as Holt took over at their own five-yard line after an interception by Caden Duke with 5:39 left in the game. Frank Merrell got Holt into the end zone as he found Jackson Smith from 18 yards with 2:29 on the clock to cut the Cardinal lead to 26-14.

Holt was able to recover the ensuing onside kick and scored three plays later as Merrell tossed his second touchdown pass of the night as he hooked up with Isaiah Slaughter on a 31-yard pitch and catch with 1:46 remaining to make the score 26-21.

Holt had one more opportunity to win the game as the Indians drove to the Webb City 38-yard line but the Webb City defense held as Jackson intercepted a Merrell pass at the three yard line to seal the deal.

Wilson led the Cardinal offense with a game-high 162 yards rushing and a pair of touchdowns while Jackson added another 104 yards on the ground as well as scoring two times. Brentan Wilson paced the Webb City defense with six tackles with Braxton Surber being credited with 1.5 sacks.

Wuebbeling paced the Indians with 120 yards on the ground and a touchdown with Merrell adding 173 yards through the air and a pair of touchdowns. Zakhi Johnson finished the night with 17 tackles while Slaughter chipped in with 13 stops.