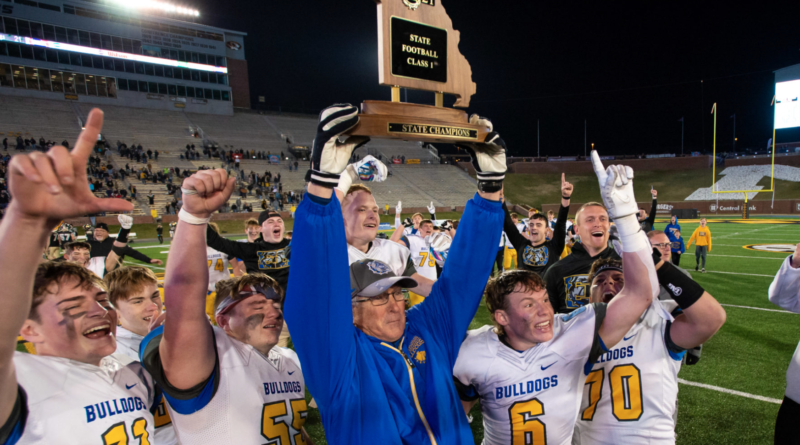 COLUMBIA — Trevor Klein accounted for 175 all-purpose yards and a pair of touchdowns to lead East Buchanan to a 21-7 victory over Marceline in the 2021 Missouri State High School Activities Association Class One championship game Saturday evening at Faurot Field on the campus of the University of Missouri. This is the first state title for the Bulldogs in school history.

The Bulldogs (14-1) opened the scoring on their first possession of the game. After forcing the Tigers to a three-and-out, Trevor Klein scored from 5-yard line to finish a 14-play, 67-yard drive that took just under seven minutes off the clock to give East Buchanan an early 7-0 lead with 3:50 remaining in the quarter.

On the next drive, the Bulldog defense stopped Marceline (12-2) on a fourth-and-one at the East Buchanan 43-yard line. Cru Conaway found the end zone from a yard out to extend the East Buchanan lead to 14-0. Both teams drove into each other’s red zone but could not come away with points as the Tigers were stopped on fourth-and-eight from the Bulldog 9-yard line and then on the next possession, Sam Gillman picked off a Klein pass in the end zone with 1:01 left in the half.

East Buchanan got things going early in the third quarter as Klein scored his second touchdown of the game from the 8-yard line to push the Bulldog advantage to 21-0 with 9:02 left in the quarter. The Tigers cut into the East Buchanan lead late in the period as Hunter Nelson scored from the half yard line to make the score 21-7. The Marceline scoring drive was highlighted by a Stallo pass that was completed to his cousin Caleb on fourth and 10 that covered 17 yards to set up the Nelson score.

In a wild beginning to the fourth quarter, Marceline had a pair of chances to get on the scoreboard in the first six minutes of the period. The Tigers missed their first opportunity with 7:23 left in the quarter as the East Buchanan stopped Marceline on a fourth and two at the Bulldog 11. After Caleb Stallo recovered an East Buchanan fumble at the Bulldog 15, Conaway bailed out the Bulldogs by intercepting a Jacob Stallo pass at their own one-yard line.

Following the Conaway pick, the Bulldogs sealed the deal with a 13-play drive that saw six minutes run off the clock to give East Buchanan the state title.

“I am just so proud of these young men, especially our defense,” East Buchanan head coach Dan Ritter said. “To hold a team to seven points once they are in the red zone three or four times, that takes resiliency and to be able to finish the game offensively, the guys came and got the job done. I thought our line dominated the line of scrimmage most of the game and I could not be any prouder.”

Klein led the Bulldog attack with 169 yards rushing and two touchdowns and added 26 yards on three catches for another 26 yards while Conaway chipped in with 68 yards on the ground with a score. Jack Archdekin paced the East Buchanan defense with 12 tackles with Aiden Hensley adding seven stops.

Jacob Stallo threw for 181 yards on 15 completions for Marceline while Sam Gillman grabbed seven of those passes for 57 yards. Mason Barnett led the Tigers defensive unit with nine tackles and a was credited with a half sack and a tackle for a loss with Jaxon Schmitt aiding the cause with eight stops and a tackle and a half for a loss.