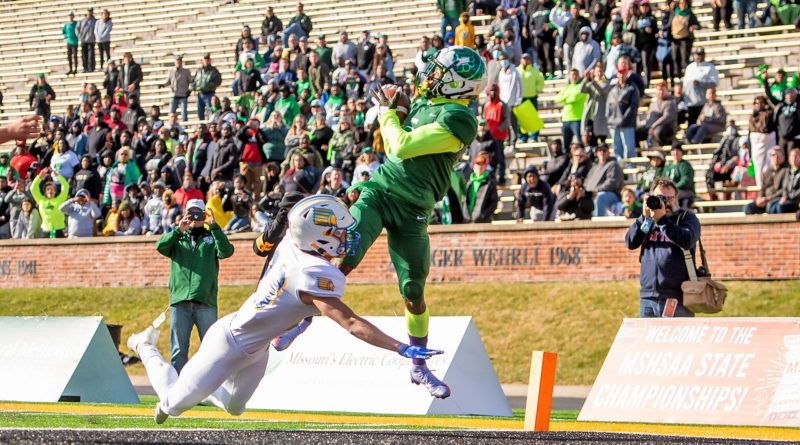 St. Mary’s scored on eight of its 10 possessions and Kevin Coleman had two receptions that resulted in touchdowns to help propel the Dragons to a 56-0 victory over St. Pius X in the 2021 Missouri State High School Activities Association Class Three championship game Saturday afternoon at Faurot Field on the campus of the University of Missouri. This is the first state football title for St. Mary’s in school history.

“We played great in all three phases of the game, and we wanted to come out and get a fast start like we have over the past few weeks and put a little pressure on them because they like to run the ball a lot,” said St. Mary’s head coach Ken Turner. “We wanted to come out and score a couple early and we almost got a third one, but with the flow of the game, we knew that our defense would get a lot of stops.”

The Dragons quick-strike offense got going early as Caron Spann found Kevin Coleman from 26 yards to cap off a four-play drive that lasted 93 seconds to give St. Mary’s a 7-0 lead. After a Warrior punt, The Dragons struck again as Spann took a quarterback keeper to the house from 23 yards out to extend the St. Mary’s advantage to 14-0.

St. Mary’s’ offense continued to move in the second quarter as the Dragons scored four times to took control of the game. Spann hit Donovan McIntosh on a 45-yard sideline route to push the lead over St. Pius X to 21-0 with 8:53 remaining in the period and then four minutes later, Spann rambled for 28 yards to score his second touchdown on the ground to make the score 28-0. St.

Mary’s defense added to the scoring as McIntosh picked off a Jack Moss pass and returned it 28 yards to push the advantage to 35-0. The Dragons ended the half as Coleman caught a 71-yard pass from Spann with 21 seconds left to make the score 42-0.

The Dragons defense limited St. Pius X to 48 yards in the first half while gaining 389 yards on 26 plays in the half.

DeShawn Fuller added to the St. Mary’s advantage in the third quarter as he capped a seven play, 46-yard drive with six-yard touchdown run to push the advantage to 49-0 with 4:22 left in the quarter. The Dragons opened the fourth quarter as Achille Kpeya hit paydirt from five yards out to give St. Mary’s a 56-0 lead.

Jamal Roberts led the way for the Dragons offense with 114 yards on 12 carries while Spann added 71 yards and a pair of touchdowns on the ground and 204 yards through the air with three scores. Coleman finished the game with two catches for 97 yards and two scores. Daimond Casseus paced the St. Mary’s defense with six tackles with Kpeya had a pair of sacks. The Dragons only allowed the Warriors 114 yards of total offense for the afternoon.

Mosh threw for 119 yards on 14 catches to lead St. Pius X offensively while Jayshawn Ross had 143 yards in all-purpose yards in the game. Vincent Cox led the way for the Warriors defense with eight tackles while Aiden Cox added six stops and a tackle for a loss.