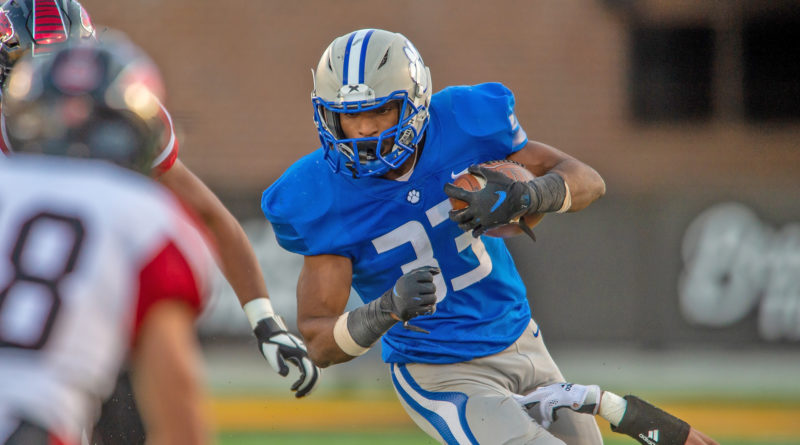 Lutheran St. Charles running back Arlen Harris Jr. scored with six seconds remaining to edge Lamar 33-27 in the Missouri High School Activities Association Class 2 state championship game Friday afternoon at Faurot Field, on the campus of the University of Missouri. This is the first time the Cougars have won a football title as they join the Lutheran St. Charles boys soccer team in winning a championship this fall.

“It is a blessing. We have been together for so long, it feels like we have been here forever,” Harris Jr said. “We have been working for this for four years straight and we knew that our time would come.”

The Tigers (13-1) opened the game with an impressive 73-yard drive that spanned 13 plays and over seven minutes as Joel Beshore scored from a yard out to give Lamar an early 7-0 advantage. After the Cougars were forced punt on their first possession, the Tigers offense went back to work as Beshore found Trace Willhite on a 62-yard pitch and catch to put Lamar on top 13-0.

The Lutheran St. Charles (12-2) defense caused the first turnover of the game as Charles Young III recovered a fumble at the Cougar 38-yard line. It took Lutheran St. Charles one play to get on the scoreboard as Aaron Coffey hit Kaleb Mays on a post route that covered 62 yards to cut the Tiger lead to 13-7.  On the following Lamar drive, the Cougars forced another fumble as CJ Colloway rambled 52 yards into the endzone to put Lutheran St. Charles ahead for the first time on the afternoon at 14-13.

Lutheran St. Charles extended the lead on the first possession of the third quarter on an eight-play drive as Harris Jr., who will be attending Stanford next fall, scored from six yards out to give the Cougars a 21-13. A key play in the drive was a successful fourth down conversion near mid-field as Harris Jr. was able to pick up the necessary yardage to keep the drive alive.

The Tigers used another drive that lasted seven minutes to answer the Cougars score as Logan Crockett scampered in from 13 yards to cut the deficit to 21-19. The two-point conversion attempt was ruled no good as Crockett was pushed out of bounds just short of the pylon.

Lamar regained the lead on their first drive of the fourth quarter as Crockett found the end zone from a yard out to put the Tigers ahead 25-21. The two-point conversion was good as Beshore hit Willhite in the corner of the end zone to make the score 27-21. Lutheran St. Charles used their special teams to tie the game as Young III returned the ensuing kickoff 88 yards to the house with 8:33 remaining in the fourth quarter to even the score at 27-27. Lamar kept the game tied as Austin Wilkerson blocked the point after attempt to keep the game knotted up at 27.

After the Cougars forced a Lamar  punt with 2:45 remaining, Harris Jr. plunged in from two yards out with six seconds remaining in the contest to finish off a nine play, 64-yard drive to put the Cougars ahead 33-27. After kicking the ball out of bounds, Lamar tried a long pass, but the Lutheran St. Charles defense held to bring the championship back to St. Charles County for the first time since 1982.

“He is not here without any of these guys,” Lutheran St. Charles Coach Arlen Harris Sr. said about his son leading the Cougars. “They have been playing together since youth football ,and he plays a highlighted position. It shows how humble he is. I am definitely proud as a dad, but I am more proud as a coach.”

Coffey led the Lutheran St. Charles attack with 197 yards while going 13-for-19 through the air with a touchdown and an interception. Harris Jr., rushed for 41 yards and a pair of scores while Mays grabbed four passes for 118 yards and a touchdown. The Harris brothers paced the Cougars defense as Harris jr., had 11 tackles while his younger brother Ayden added nine stops.

The Tigers racked up 401 yards of total offense with Beshore gaining 83 yards on the ground and a score while throwing for another 130 through the air with another touchdown. Willhite added 58 rushing yards while grabbing a pair of passes for 64 yards and a touchdown. Wilkerson finished the night with seven tackles Beshore added a five stops and an interception.