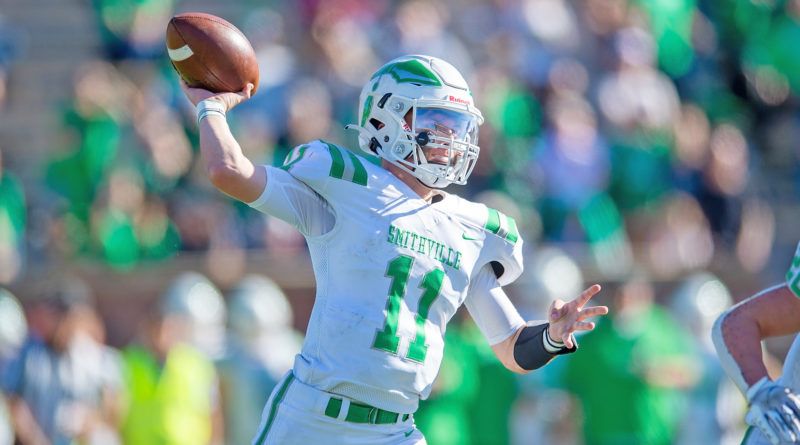 The Smithville defense limited Hannibal to 177 yards of total offense while forcing three interceptions en route to a 31-0 victory over the Pirates in the 2021 Missouri State High School Activities Association Class Four state title game at the University of Missouri’s Faurot Field on Friday afternoon. Smithville junior quarterback Andrew Hedgecorth accounted for 207 yards of total offense to propel the Warriors to their first state football title in school history.

The Warriors cracked the scoreboard first after Ryan Weers intercepted a Courtland Watson pass that gave Smithville the ball at the Hannibal 49-yard line. It took Smithville one play to take the early advantage as Hedgecorth found Rhett Foster down the sideline for a 54-yard touchdown pass to put the Warriors ahead 7-0.

Smithville extended the lead in the early portion of the second quarter as Hedgecroth hooked up with Keltin Nitsche on a four-yard touchdown pass to cap off a 13-play drive to put the Warriors on top 14-0. The remainder of the quarter turned into a defensive battle as each team forced an interception to close out the half with the Warriors taking a 14-0 lead into the locker room.

Smithville limited the Pirates to 91 yards on 30 plays in the half while the Warriors picked up 188 yards on 34 snaps. Hedgecorth finished the half with 112 yards on 8 receptions with a pair of touchdowns to pace the Smithville attack.

The offense continued to roll for the Warriors in the third quarter as Smithville drove 75 yards in six plays with Cody Simoncic scoring from six yards out to put the Warriors on top 21-0. Hannibal had an opportunity to score late in the quarter as the Pirates drove to the Smithville 14, but Simoncic picked off Watson in the endzone to stop the Hannibal uprising.

The Warriors added 10 insurance points in the final quarter as Noah Schuetz hit a 24-yard field goal and Preston Rush sealed the deal with a 15-yard touchdown run with 1:37 remaining in the game to give Smithville the state title.

“To be preseason No. 1 and then to follow it all the way through, and then to keep getting better all the time while dealing with adversity and playing great competition, coming out the way that they did, that is all the players,” Smithville head coach Jason Ambroson said following the game.

The Warriors offense rolled to 363 yards of total offense with Caleb Donnell running for a game-high 73 yards while Simoncic added another 53 yards and a touchdown to lead the Smithfield running attack. Nitsche paced the Smithville receivers with 81 yards on eight catches and a score. William Talley led the Warrior defense with 15 tackles and a forced fumble with Simoncic had 11 stops with an interception.

Watson led the Pirates with 66 yards on the ground and added another 48 yard through the air while AJ Thomas had 38 yards rushing for the Pirates. Aneyas Williams paced the Hannibal defense with 12 tackles with Ashton Watts chipping in with nine stops.