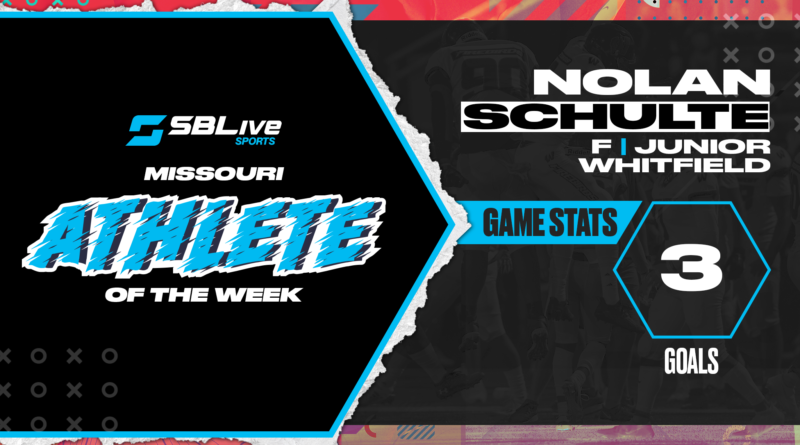 The senior forward had one of the best performances of championship weekend, recording a hat trick en route to Whitfield claiming a 4-2 victory over Perryville in the Class 1 title game Nov. 20.

Schulte received 50.23% of the vote, beating out Thayer’s Jackson Willison who finished second with 33.97%. King City’s Parker Muff finished third with 10.2% and Fort Zumwalt South’s Luke Dillon finished fourth with 4.48%. There were over 21,000 votes tallied this week!

Here are the other athletes who were nominated for Nov. 15-21:

The quarterback accounted for every single one of CBC’s scores during a 28-21 win over Lee’s Summit North in the Class 6 semifinals, throwing for 269 yards and one touchdown while using his legs for 20 yards rushing and his other three scores.

Hall took 20 carries and turned those into 126 yards rushing during a 22-20 win over St. Dominic. He added 61 yards receiving and a touchdown on three catches.

The wideout was a difference maker during the Cardinals’ 35-13 win over Lebanon, racking up 91 yards receiving and a touchdown.

Dillon, a senior goalkeeper, had four saves during a 2-1 win over Ladue in the Class 3 title game Nov. 20. The win secured the program’s third title in the last four seasons.

The Eagles are headed to the Class 6 title game, and Van Dyne has been a massive part to their success this fall. He had 264 yards passing and two touchdowns during Liberty North’s 35-21 win over Troy-Buchanan in the semifinals.

Ross has been the primary target of star quarterback Jack Mosh this season, and that was no different last week. The wideout reeled in eight of Moss’ passes for 113 yards and two touchdowns during a 42-13 win over Pleasant Hill.

Lamar is eyeing a spot in the Class 2 title game, and Beshore used his legs to get them a step further last weekend. He carried the ball 14 times for 124 yards while throwing for two touchdowns during a 35-14 win over Ava.

Thayer might be preparing for the start of basketball season if it weren’t for Willison, a running back who had 253 yards rushing and three touchdowns to lead Thayer to a 30-22 win over Windsor.

This wideout was one of Patrick Heitert’s favorite targets during CBC’s 28-21 win over Lee’s Summit North, snagging six catches for 124 yards receiving.

Arzola, a running back, plowed through the defense’s front seven for 105 yards rushing and two touchdowns during a 35-21 win over Troy-Buchanan.

Andrew kept MICDS alive for at least one more week, using 142 yards passing and two touchdowns through the air to lead them to a 22-20 win over St. Dominic. He added 90 yards rushing and a score.

During North County’s 49-28 win over Vashon, the running back had 168 yards rushing and four touchdowns. Smith, single-handedly, scored as many times as the opposition.

Marchi has been a crucial part to Jackson’s success over the last few years, not losing a single game since the start of the 2020 season. He threw for 515 yards and six touchdowns during a 49-14 win over Rockwood Summit.

Hall spearheaded the Indians’ rushing attack during a 35-0 win over Grain Valley, leading the way with 81 yards rushing and a touchdown.

Muff, a senior running back, had 271 yards rushing and three touchdowns during the Wildkats’ 42-28 win over top-seeded Bishop LeBlond in the 8-man District 3 title game.

Magueja was a key part in Lutheran capturing its first ever state title, scoring two goals en route to a 3-0 win over St. Pius X in the Class 1 title game Nov. 20.