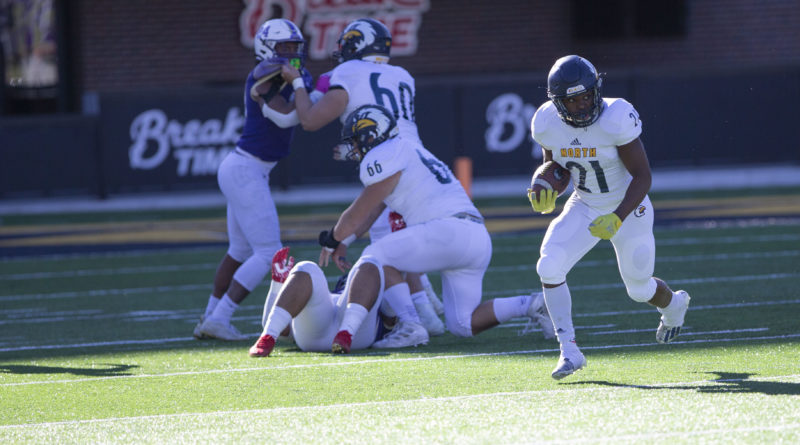 It wasn’t wire-to-wire, but it was close. The Cadets took over the No. 1 spot in the rankings in Week 3, and they never let it go. Christian Brothers College defeated Liberty North in the Class 6 state championship game, earning the program’s fourth title since 2014 and third in the past five years.

Even though the Eagles suffered a convincing loss against CBC in the Class 6 state title game, their body of work stands up against anyone’s in Missouri. Liberty North won 11 consecutive games while securing conference and district crowns on the way to the best season in team history.

Over the years, the Broncos have had talented teams, but they never lived up to the hype until this season. Lee’s Summit North put together the most successful campaign in program history, and as it turns out, its two losses came against the  Class 6 state finalists: CBC and Liberty North.

A miracle comeback saved the Warriors’ undefeated season and propelled them to the state championship for the second time ever. Smithville trailed MICDS 36-20 but scored three touchdowns in the final eight minutes of the semifinal. The Warriors will face Hannibal in the Class 4 title game.

One big question mark stands out for the Indians as they prepare for the Class 5 state championship game against Webb City. Will they have the services of Cooper Brown? The star quarterback started last week’s semifinal game against Fort Osage but didn’t finish it because of a wounded shoulder.

One of the best running backs in the state, Aneyas Williams, has piled up incredible offensive numbers this season. But he has yet to face a defense as stingy as Smithville. Whoever wins that battle will likely walk away with the Class 4 Show-Me Bowl first place trophy.

After knocking off defending state champion Jackson, the Cardinals are officially the state’s hottest team in the second half of the season. Winners of six straight games, Webb City has gone from unranked all the way to the top 10 in the state poll during the past month.

The Spartans’ season ended in the district semifinals against eventual Class 6 state champion Christian Brothers College. De Smet suffered two losses against CBC this year, and the other was against Illinois powerhouse East St. Louis.

The numbers are simply mind boggling. St. Mary’s has destroyed the opposition during its Class 3 postseason push. The Dragons have outscored their past four opponents 216-36 and take all that momentum into the state championship game against St. Pius X (Kansas City).

The Indians’ 26-game winning streak and state title hopes ended with a Class 5 semifinal loss at red hot Webb City. One of the highest scoring teams in the state mustered only three touchdowns in nine possessions in the season-ending loss.

With eight minutes left in the semifinals, it looked like MICDS would advance to the Class 4 state finals for the second year in a row. Instead, the Rams will finish one game shy of a return trip to Columbia after a suffering a heartbreaking loss at the hands of Smithville.

Despite failing to make the Class 5 playoffs, the Tigers put together one of the most impressive regular seasons in the state. A season-ending loss in the district final to Webb City brought the year to an earlier end than expected.

It’s official. Lamar now owns the state’s longest winning streak at 23 games in a row. Led by head coach and Lamar graduate Jared Beshore, the Tigers continue to stand alone as the top small-class team in Missouri. Up next is a Class 2 state title game date against Lutheran St. Charles.

Playing in the large Class 6 level for the first time, the Panthers proved their worth by rolling through the regular season undefeated and advancing to the district finals where they ran into eventual state finalist Liberty North.

Despite a loss to Liberty North in the Class 6 semifinals, the Trojans enjoyed one of the biggest turnaround seasons in the state. Coming off a 3-7 campaign last year, Troy went on to post the most successful season in team history.

The Zizzers have lost two games or fewer in each of the past four seasons. This year’s defeats came against Class 5 playoff team Lebanon and eventual Class 4 state finalist Hannibal.

Chalk up another winning season for Francis Howell, which has become the norm for the program. The Vikings losses this year came against Class 6 semifinalist Troy Buchanan and Class 5 finalist Holt.

The high-scoring Eagle offense that averaged 40 points per game in the regular season disappeared in the postseason. Joplin scored only 48 points in three district games, including zero against Lee’s Summit North in the final.

A stout Falcons defense surrendered only 93 points all season, but 49 of them came in a season-ending loss against Class 5 semifinalist Jackson in the quarterfinal round of the playoffs.

For the second year in a row, the Yellowjackets suffered a season-ending defeat against Webb City in the Class 5 state quarterfinals. Still, this marks the seventh straight winning season for Lebanon.

The Panthers put together a solid season where their only losses came against eventual Class 6 runner-up Liberty North and Class 6 semifinalist Lee’s Summit North (twice).

The Warriors were one of the most dominant small-class teams in the state, before they suffered a district championship loss to St. Mary’s (St. Louis).

The Warriors needed a last-second miracle to pull out their Class 3 semifinal victory against Cardinal Ritter. A fourth-down run was stopped, but Robbie Sharp pitched the ball back to quarterback Jack Mosh, who tossed a winning touchdown pass with two minutes left in the game.