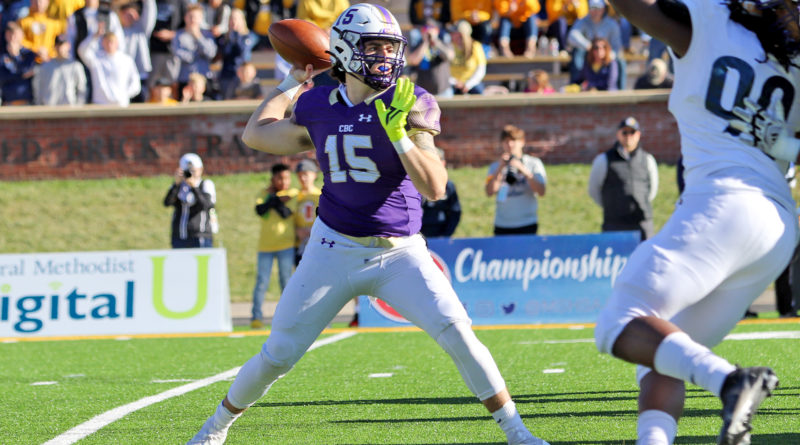 Christian Brothers College caused six turnovers and Jeremiyah Love rushed for 127 yards and two touchdowns to lead the Cadets to a 48-21 victory over Liberty North to claim the Missouri State High School Activities Association Class Six football championship Saturday afternoon at Faurot Field on the campus of the University of Missouri. The win for CBC gives the program its fourth state title in the past eight years.

The Cadets (13-1) opened the scoring after Liberty North (11-2) missed a 46-yard field goal early in the first quarter as Love capped a five-play drive with a 62-yard scamper to give CBC an early 7-0 lead. Following the ensuing kickoff, the Cadets’ defense forced the first turnover of the day as Kendall Hutson picked off a Sam Van Dyne pass and returned it to the Eagles’ 10-yard line. Three plays later, Patrick Heitert found Ayden Robinson-Wayne in the corner of the end zone to extend the lead to 14-0. The Eagles answered on their next possession as Van Dyne hit Freddie Levan III for a 36-yard touchdown pass to cut the Cadet advantage to 14-7.

After each team traded punts to start the second quarter, Justus Johnson grabbed his fourth interception of the season and took it 55-yards to the endzone to give the Cadets a 21-7 lead.

“That’s a defensive back’s dream,” Johnson said.. “It was all green grass.”

CBC continued to put pressure on the Liberty North quarterback as Tyler Gant tipped a Van Dyne pass to himself for the third interception of the afternoon to give CBC the ball at the Eagles’ six-yard line.

Liberty North was able to hold the Cadets to a Josh Kacich 30-yard field goal as Melvin Laster had two tackles for losses on the drive. The turnover woes continued for Liberty North on the following drive as CBC forced a fumble that was recovered by Jaycob Tatum at the Cadet 42-yard line. Love ended the drive with his second touchdown of the day as he hit paydirt from two yards out to stake CBC to a 31-7 halftime lead.

The Cadet defense kept things going to start the second half as Malik Matthews forced another fumble on the Eagles first play of the half and Michael Teason picked up the fumble and ran 37-yards to the endzone to extend the CBC advantage to 38-7.

The Eagles’ offense got on track midway through the third quarter as Cayden Arzola ended a nine-play drive with a seven-yard touchdown run to cut the CBC lead to 38-14. The Cadets added another Kacich field goal, this time from 21 yards out with 2:03 left in the third quarter to push the score to 41-14. Liberty North was able to score with 39 seconds remaining in the quarter as Micah Barnett scored his ninth touchdown of the year from seven yards out to cut the deficit to 41-21.

CBC added an insurance score with 6:13 left in the game as Heitert found Dakotah Mayo on a 35-yard pass to give the Cadets a 48-21 advantage. That is all the Cadets needed as their defense forced its third fumble of the day to guarantee the win and their third state title in five years.

“Our defense came out early and got us some great turnovers and got us great field position,” CBC head coach Scott Pingel said. “Everytime we got a short field, we converted. We always talk about how defense wins championships.”

Heitert finished the game with 96 yards through the air and a pair of touchdowns while adding another 82 yards on the ground to lead the Cadets.

“It’s easy to go out there and play offense when you don’t have a lot of pressure, and we didn’t have much because our defense played a heck of a game,” Heitert said. “When they’re scoring for us, that just gives us more time on the sideline to figure out what plays are going to work.”

Love added 127 yards rushing with Dylan Van adding another 57 yards in the win. Hutson paced the CBC defense with seven tackles, a sack, and an interception while Kyan Franklin also added seven tackles in the win.

Arzola was a key part of the Eagles’ offense as he carried the ball 24 times for 150 yards and a score with Barnett adding 54 yards on 11 carries and a touchdown. Levan III grabbed three Van Dyne passes for 76 yards and a score. Trey Snyder led the way for the Liberty North defense with 10 tackles and 1.5 tackles for a loss with Laster making nine stops and a sack.