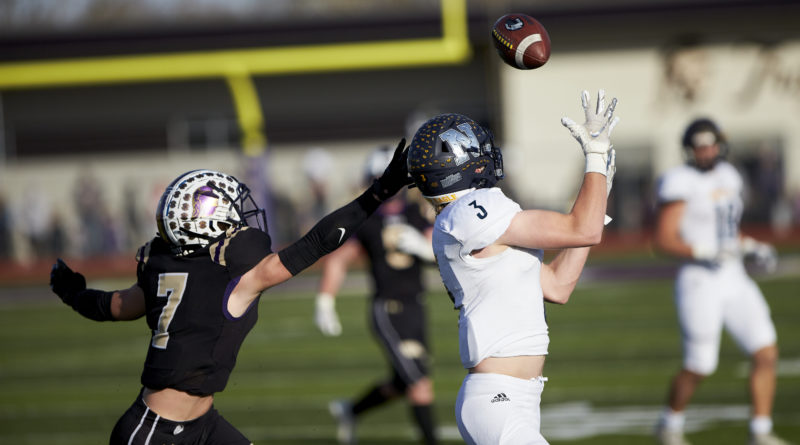 Using a fourth-quarter comeback to pull out a semifinal victory against No. 4 Lee’s Summit North last week, the Cadets have won 12 games in a row since a season-opening loss. State champions in 2014, 2017 and 2018, Christian Brothers College will meet Liberty North in the Class 6 Show-Me Showdown in search of a fourth state crown in seven years.

Thanks to last week’s quarterfinal victory against Rockwood Summit, the Indians extended their state-best winning streak to 26 games in a row and their home winning streak at “The Pit” to 31 straight, which dates back to five years ago. Next up for Jackson is one of the biggest challenges any team can face – playing a playoff game at Webb City.

For the first time in the 12-year history of the program, the Eagles have advanced to the state championship game. Liberty North will take on top-ranked Christian Brothers College in a Class 6 title game that features two of the hottest – and best – teams in Missouri who suffered Week 1 defeats to out-of-state opponents but have not lost since.

Leading by 14 points with 15 minutes left in the game, the Broncos had the No. 1 team in the state on the ropes. However, Christian Brothers College came storming back and ended Lee’s Summit North’s state championship hopes – and its season. As it turns out, the Broncos’ two losses this season came against the state finalists.

The Warriors defense did it again. Thanks in large part to forcing three turnovers in the red zone, Smithville defeated Lincoln College Prep last week and held an 11th-straight opponent to 14 points or less. That streak will be put on the line in the Class 4 semifinals this weekend against MICDS, which averages 46 points per game.

A late-game rally against Chaminade College Prep in last week’s Class 5 quarterfinal game saved the Indians’ dream season. Holt has now won 20 games in their past 21 tries over the past two seasons, not counting a season-ending COVID forfeit last year. Holt will take on Fort Osage in the state semifinals.

In the first 11 games of the season, the Rams defeated every opponent by 20 points or more. That changed in game 12 as MICDS had to hang on for a two-point victory in the Class 4 quarterfinals against St. Dominic. Another close game is expected in the semifinals against No. 5 Smithville.

The Spartans’ season ended in the district semifinals against top-ranked Christian Brothers College. De Smet suffered two losses against CBC this year, and the other was against Illinois powerhouse East St. Louis.

For the first time this season, the Pirates failed to score 40 points in a game, but they came close. Last week, Hannibal was held to a season-low 35 points in the Class 4 quarterfinals against West Plains. Next up is a semifinal test against North County.

Over the past month, no one has been more dominant than the Dragons. Led by star receiver Kevin Coleman, who is considered the top college recruit in the state of Missouri according to 247sports.com, St. Mary’s has outscored its last four opponents 206-27.

When the Cardinals lost to Nixa in early October, they were on the cusp of the most disappointing season in nearly 25 years. Forget all that. Webb City has ripped off five consecutive victories since then, the past two coming against ranked Carthage and Lebanon.

Despite failing to make the Class 5 playoffs, the Tigers put together one of the most impressive regular seasons in the state. A season-ending loss in the district final to Webb City brought the year to an earlier end than expected.

The reigning Class 2 state champions have extended their win streak to 22 games in a row. Lamar has defeated every opponent this season by at least 21 points, including previously undefeated Ava (35-14) in the quarterfinals.

Playing in the large Class 6 level for the first time, the Panthers proved their worth by rolling through the regular season undefeated and advancing to the district finals where they ran into eventual state finalist Liberty North.

Despite a loss to Liberty North in the Class 6 semifinals, the Trojans enjoyed one of the biggest turnaround seasons in the state. Coming off a 3-7 campaign last year, Troy went on to post the most successful season in team history.

After posting more than 50 points per game in their previous five games, the Zizzers scored only 26 points in a season-ending loss against high-flying Hannibal in the Class 4 quarterfinals.

In heartbreaking fashion, the Vikings saw their season end on the final play of the district championship game against Troy Buchanan. Francis Howell’s other loss this season came against Class 5 semifinalist Holt.

The high-scoring Eagle offense that averaged 40 points per game in the regular season disappeared in the postseason. Joplin scored only 48 points in three district games, including zero against Lee’s Summit North in the final.

A stout Falcons defense surrendered only 93 points all season, but 49 of them came in a season-ending loss against reigning Class 5 state champion Jackson in the quarterfinal round of the playoffs last week.

For the second year in a row, the Yellowjackets suffered a season-ending defeat against Webb City in the Class 5 state quarterfinals. Still, this marked the seventh straight winning season for Lebanon.

The Panthers put together a solid season where their only losses came against highly ranked No. 3 Liberty North and No. 4 Lee’s Summit North (twice).

The Warriors were one of the most dominant small-class teams in the state, winning 10 games, each by at least 34 points, before a loss to St. Mary’s (St. Louis).

Now riding a six-game win streak where they have outscored the opposition 258-33, the Warriors look like serious title contenders in Class 3. St. Pius X finished as the state runner-up to Lamar in Class 2 last season.

Earlier this season, the Indians edged Grain Valley, 9-8, but they completely dominated in the rematch, 35-0, in last week’s Class 5 quarterfinal. Fort Osage takes a nine-game win streak into the semis against Holt.