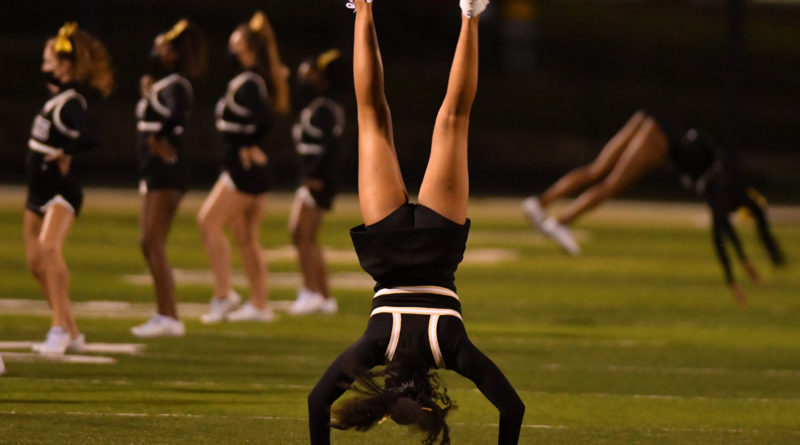 Check out the Liberty North football Twitter handle – @LNEagleFootball – and you’ll find a numerical hash tag on most tweets.

So, naturally, there’s one simple question. What exactly is #1-4-1?

“It has two meanings, actually,” Liberty North head coach Greg Jones said. “It means, it takes everyone on this team working together towards one goal, and it means that every member of this program needs to do their individual job for us to succeed as a group.”

Liberty North’s leadership council, a group Jones’ programs have utilized over the years, devised the team motto during the offseason. This year’s council is comprised of about two dozen senior and junior team leaders and has been part of several team decisions throughout the season, including the selection of which uniform to wear week to week.

The council nailed its job in naming a mantra for the 2021 campaign.

Liberty North, ranked No. 3 in the SBLive Missouri Top 25 since a Week 3 victory at 2020 Class 6 state champion Raymore-Peculiar, has used this team-first adage to spark a 10-game winning streak after losing the season-opener to perennial Arkansas powerhouse Bentonville, who hosts a quarterfinal playoff game Friday night. The Eagles (10-1 overall record) went on to claim the Greater Kansas City Suburban Gold Conference championship and back-to-back district titles, and now they have reached the Class 6 semifinals for the second straight year.

As the season has unfolded, the goals have evolved. Now, the Eagles have only one thing on their mind: advance to the state championship game – the MSHSAA Show-Me Showdown – for the first time in the 12-year history of the program.

Liberty North has been one of the most consistent, well-balanced teams in the entire state this fall. A team with no shortage of playmakers in all three phases, the Eagles have outscored their opponents by more than three touchdowns per game in their victories.

Offensively, the team’s success starts with a physical offensive line and imposing rushing attack. Cayden Arzola (1,076 yards and 15 touchdowns) and Micah Jo Barnett (832 yards and eight scores) form a one-two backfield punch that most teams can only dream of.

Quarterback Sam Van Dyne has completed 97-of-142 passes (69 percent completion rate) for 1,772 yards and 18 touchdowns this season. His favorite targets are Justis Braden (31 catches for 579 yards and five touchdowns) and Tate McGuire (24 for 372 and six scores). Not to mention, North also has the services of Blake Craig, one of the best place kickers in the state, who has converted 51-of-52 extra points and 11-of-12 field goals this season.

Not to be outdone, the Liberty North defense has been equally as dominant throughout the year, surrendering more than 14 points in only three games. Led by linebackers Melvin Laster and Kaden Durso, the swarming Eagles have forced 20 turnovers and registered 25 sacks while playing one of the toughest schedules in the state.

Oh and by the way, Liberty North has one of the best leaders around guiding them into battle. Jones has taken three different football programs to a combined nine state semifinal games (one at Park Hill South, six at Kearney and now two at Liberty North) in a decorated 25-year head coaching career.

Webb City extends playoff streak to 22 with victory over Carthage

Back in September, Webb City received a 42-14 beating from Carthage. But that was nearly two months ago.

Much can change in that time. And it did.

“When we played here before, we weren’t a very good football team,” Webb City head coach John Roderique told OzarkSportsZone.com after last week’s Class 5 District 6 championship game. “… Through the course of the season we’ve become a little bit better all the time.”

That would be an understatement. Roderique’s Cardinals turned the tables on the most dominant Class 5 team in the state this season by stunning Carthage in the rematch, 28-21, and have rejoined the SBLive Top 25 at No. 20.

Webb City did most of its damage on the ground in the district title game, rushing for nearly 250 yards against Carthage’s stingy defense. Cade Wilson carried 25 times for 157 yards, while quarterback Cohl Vaden rushed for 59 yards and two touchdowns to go along with 89 yards passing and a score.

Although the two teams have been longtime rivals, Webb City has dominated the series by now winning 14 of the past 17 meetings with the Tigers, including five of the past six in the postseason. This most recent victory propelled Webb City to an unprecedented 22nd consecutive district title.

It also earns the Cards’ a state quarterfinal matchup at No. 15 Lebanon. The same two teams met in this very round last year, and Webb City prevailed, 42-14.

Carthage had won six district titles in the past seven seasons but saw that run come to an end last week. But even more devastating, the Tigers’ state championship hopes in 2021 came to an end before the playoffs even started.

In Missouri, most postseason football matchups are dictated by geography. But not this year. Not in the Class 6 semifinals.

Had the semifinal matchups been determined by the location of the high school campuses, CBC would have had a 40-mile drive to Troy while Lee’s Summit North would have driven fewer than 30 miles across town to Liberty North.

So why the extended trips? Pure happenstance. Every year, MSHSAA rotates the playoff brackets with the intentions of generating new semifinal matchups and avoiding rematches year after year.

Just by chance, a pair of teams from both Kansas City and St. Louis claimed the district titles in Class 6, and it turns out that the East vs. West semifinal matchups will require long road trips this season. While it might not be the most ideal setup, what it means is that there could potentially be an all-Kansas City or all-St. Louis state championship game next weekend, something that does not happen all that often.

Keep in mind, these cross-state playoff trips may also happen in Class 1 through Class 5 – not so much this week for the quarterfinals but next week in the semifinals. So be prepared to pack your bags football fans.