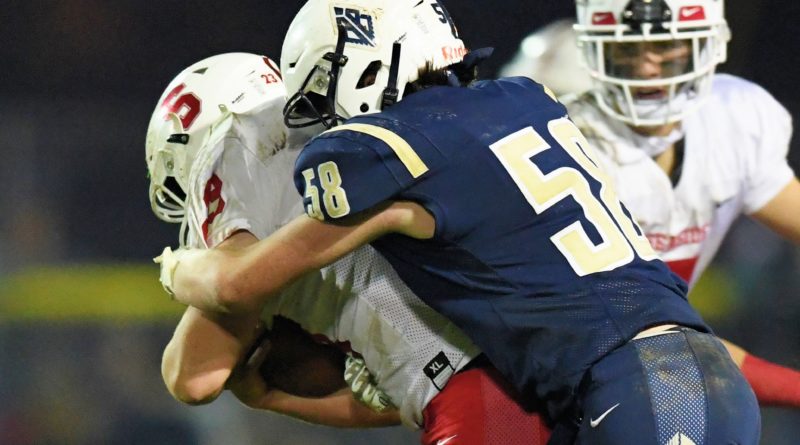 Over the next few weeks, we’ll be taking a position-by-position look at some of the top players in Missouri high school football. This list focuses on the linebackers.

There are hundreds of standout football players in Missouri, and these lists are not intended to be comprehensive. Use the comments section to discuss the other linebackers worthy of fans’ attention in 2021.

Roy — a three-star recruit who has offers from 13 Division I programs, including Kansas, Army, Missouri, Nebraska, Tulane and Toledo — entered this fall on the heels of a junior campaign that garnered a first-team Class 5 selection. This season, the senior has anchored Glendale’s defense en route to an 8-2 record and a chance for a Class 5 District 5 title against Lebanon.

The three-star recruit used his 6-2, 200-pound frame to reel in 11 Division I offers prior to committing to play at Iowa State back in April. His junior season was put to a close with being honored as second-team all-district. He’s used his farewell tour to wreak havoc on opposing offenses before he heads to Ames, Iowa.

Skiljan has two offers toward the end of his senior season — Georgetown and Kent State — but he’s making a case for that list to expand. He was named first-team All-Metro Catholic Conference last year, and he’s followed that up by leading De Smet’s defense to limit opponents to an average of 17.4 points per game this fall.

If Parkway West has needed something from Simms, he’s been up for the challenge. Previously a first-team all-conference running back and s a second-team all-conference selection on defense, the senior used 58 tackles and six sacks to lead the Longhorns to a 7-3 record, including a season-ending loss to Lafayette (Wildwood) in the first round of the Class 5 District 2 Tournament.

Scott entered his senior campaign following a junior season that included 94 tackles and 10 sacks en route to being named the Suburban Blue Defensive Player of the Year. He holds an offer from South Dakota State, but he hasn’t committed to be a Jackrabbit just yet, mostly because he still has business to finish as a Pirate. Platte County will carry a 9-2 record into the Class 5 District 8 title game against Fort Osage.

Jacquez filled a void left by Von Young IV, a linebacker who led Fort Osage to the Class 5 title game in 2018, and he’s picked up right where Young left off. He was named third-team all-state as a junior after totaling 121 tackles, 13 tackles for loss, four sacks and two blocked kicks. He’s led the Indians to the Class 5 District 8 title game against Platte County behind a 9-1 record and a defense allowing just 15 points per game this fall.

Despite the lack of overall success from the Tigers, Johnson went a long way toward the 4-6 record this season. He followed an all-conference junior season with a farewell campaign that featured 56 tackles, nine tackles for loss and five sacks. He serves as a bright spot on offense as well, finishing this fall with five rushing touchdowns and averaging 6.4 yards per carry.

Franklin has traveled a lot since the beginning of this past summer, attending a camp at the University of Kentucky and taking visits to Kansas and Ball State. He’s used this fall to show why teams should be chomping at the bit to get him next year, recording a team-leading 63 tackles, five tackles for loss, a sack, a forced fumble and a fumble recovery en route to Christian Brothers’ finishing the regular season with an 8-1 record.

The junior has compiled a team-leading 69 tackles and three sacks this fall for John Burroughs. He also had five tackles for loss, an interception and a fumble recovery, and those efforts were good enough to anchor the defense despite a season-ending loss in the first round of the Class 4 District 3 Tournament.

Laster, just a sophomore, has terrorized opposing defenses this fall, and he’s planning on continuing to do so while Liberty North chases the Class 6 title. He’s had 63 tackles, seven tackles, two interceptions and a fumble recovery, all en route to the Eagles carrying a 9-1 record into the Class 6 quarterfinals against Kansas City foe Park Hill South.

There isn’t an area of the field Bryant isn’t capable of covering, as the senior linebacker recorded 131 tackles this fall to help Jennings’ finish with a 7-4 record, eventually losing to Hazelwood East in the second round of the Class 4 District 4 Tournament. He also had three tackles for loss and two fumble recoveries to put the punctuation on his high school football career.

Harris isn’t just a prolific running back — rushing for eight touchdowns and 509 yards this fall — he’ll stuff the opposing team’s halfback at the line of scrimmage. He’s anchored the Lutheran defense that paved the way for the Cougars to earn a first-round bye in the Class 2 District 2 Tournament before nabbing a 61-0 win over Hermann in the district semifinals Nov. 5. He’s added two sacks, an interception and a fumble recovery this fall, too — all in his second year of high school. Harris, as a freshman was named to the all-conference and all-district teams.

Chouinard returned his only interception of the season 99 yards for a touchdown during a matchup with Warrenton Oct. 15, but that’s far from the only impact the senior has had on Orchard Farm’s defense. He’s made 122 tackles, and has a sack, en route to the Eagles finishing the season 5-6 after a loss to Lutheran North in the semifinals of the Class 3 District 3 Tournament.

McGukin, just a junior, tackled more people than most in the state of Missouri this season, carrying 131 of them into the offseason after a 20-0 loss to Mark Twain in the semifinals of the Class 1 District 2 Tournament. He’s had nine tackles for loss, but he’s impactful on the offensive side of the ball as well, where he’s carried the ball 49 times for 227 yards and two touchdowns. McGukin hasn’t let his small-for-a-linebacker frame keep him from being one of the most disruptive defensive players in the state this fall.

Mehlville didn’t have the season it wanted to, finishing 5-6 after a loss to Jackson in the second round of the Class 5 District 1 Tournament, but Kaemmerer was a key part in the Panthers’ defensive success. He had 99 total tackles this fall to go along with two sacks, an interception and a fumble recovery.

Lamar is one of few teams still in the hunt for a title, and the 10-0 Tigers are going to have their defense ready to go because of Lawrence when they face Fair Grove for the Class 2 District 4 title Nov. 12. The senior entered this fall on the heels of a junior season that earned him first-team all-state, and he’s been a crucial factor as to why Lamar has held opposing teams to an average of 7.9 points per contest.

If there’s a school in the Mid-America Intercollegiate Athletics Association, Simoncic has likely gotten an offer from that program, and it’s in large part due to being named a first-team Class 4 linebacker as a junior. He showed he was ready as early as Week 1, returning an interception for a touchdown during a season-opening win over Grain Valley. He currently holds offers from Northwest Missouri State, Pittsburg State, Central Missouri, Washburn, Missouri Western, Fort Hays State and South Dakota State.