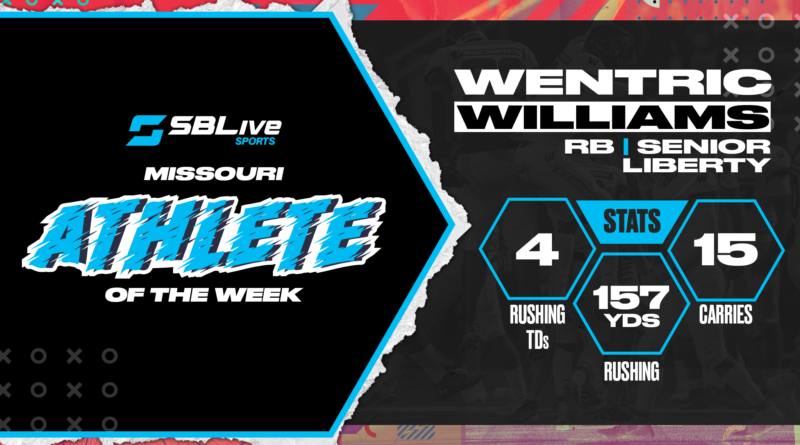 Congratulations to Liberty running back Wentric Williams III for being voted SBLive’s Missouri High School Athlete of the Week for Oct. 25-31!

The senior was able to gash the defense during the Blue Jays’ 48-0 win over Columbia Rock Bridge, carrying the ball 15 times for 157 yards rushing and a season-high four touchdowns.

Williams received 37.68% of the vote, beating out Holt’s Kayley Russell who finished second with 31.67%. Raytown’s Travon Johnson finished third with 18.17% and Platte County’s Dayne Wimberly finished fourth with 9.57%. There were over 21,000 votes tallied this week!

Arzola, a senior running back, carried the ball 23 times for 150 yards and two touchdowns during the Eagles’ 34-31 win over Blue Springs.

Russell was able to squeak out the first-place finish at the Class 5 District 3 meet Oct. 30 in Washington, Missouri, finishing in 19 minutes and 34 seconds — one second faster than second place.

Despite a season-ending, five-set loss to Marquette Oct. 28, the sophomore setter had 56 kills and 16 digs.

The junior quarterback scored six total touchdowns, including five rushing, during a 50-13 win in the Class 6 District 6 quarterfinals.

Brown, a pitcher who is just a sophomore, struck out 13 batters en route to a two-hit shutout during Washington’s 11-0 win over Rolla in the Class 4 title game Oct. 29.

Douglass, a senior goalkeeper, had four saves during a 2-0 win over MICDS in the title game of the Midwest Field Hockey Tournament.

Glenn, a junior quarterback, had four total touchdowns during Harrisonville’s 51-15 win over Grandview. He was 5-of-6 for 96 yards passing and a score to go along with five carries for a yard and three rushing touchdowns.

The senior hit a one-out, first-pitch, walk-off single with the bases loaded in the bottom of the seventh to give the Titans a 6-5 win over Francis Howell Central and the Class 5 crown.

Brightman accounted for all five of Lawson’s touchdowns in a 36-35 upset win over Pembroke HIll. The senior was 3-of-4 for 19 yards passing and a touchdowns, and he also had 28 carries for 181 yards rushing and four scores.

The senior finished with a first-place time of 17 minutes and 24 seconds at the Class 3 District 4 meet Oct. 30 in St. Joseph, Missouri. He led the charge for a Maryville boys team that claimed the top three spots of the meet.

Zaun shredded the secondary in a 45-20 win over Lexington, going 15-of-22 for 196 yards passing and three touchdowns. He also punted twice for 84 yards.

The senior pitcher improved to 21-1 this season after dealing nine strikeouts during a 4-0 win over Sullivan in the Class 3 semifinals Oct. 30.

During a 3-2 loss to Lee’s Summit West Oct. 30, the senior setter had her second-highest assist total this season with 53. She also had 14 digs throughout the five-set thriller.

The senior quarterback had one of the best performances throughout the state in the first round of district play, going 15-of-19 for 213 yards passing and six touchdowns during a 56-14 win over Ozark.

The junior wideout was the difference during a 38-17 win over St. Joseph Central, reeling in three touchdowns catches for 93 yards on just three receptions.

At the Class 2 District 1 meet Oct. 20 in Ironton, the senior captured first place with a winning time of 16 minutes, 49 seconds and 91 milliseconds. He finished 12 seconds ahead of second place.

Williams, a junior running back, had a career-best performance when he carried the ball 27 times for 248 yards rushing and four touchdowns en route to a 39-0 win over Wellington-Napoleon.

Despite a 3-2 loss to Hickman Oct. 25, the senior outside hitter had 24 kills while hitting .380%. She only had five errors on 50 hitting attempts.

Porter, a sophomore wide receiver, had three total touchdowns during the Hornets’ 49-20 win over William Chrisman in Week 10. He caught five passes for 99 yards receiving and two scores to go along with four carries for 51 yards rushing and a touchdown.

The junior finished roughly a minute and a half ahead of second place at the Class 1 District 3 meet Oct. 30 in Linn, Missouri, finishing the 5,000-meter run in 18 minutes, 54 seconds and 64 milliseconds.

The senior defensive back was a key part in shutting down Winnetonka’s offense in Week 10, intercepting two passes en route to the Bulldogs’ 35-13 win over the Griffins.

The senior had 34 digs and received 11 serves during Skyline’s 3-0 win over Liberty (Mountain View) Oct. 30 to keep their season alive.

En route to Mehlville’s first postseason win since 2013, the senior had 198 yards rushing for two touchdowns. He also had an interception while playing defense.

The senior running back ran for 235 yards and a touchdown during the Wildcats’ 51-15 win over Grandview.

The running back ran wild during a 56-22 win over Louisburg, going off for 161 yards and three touchdowns.

During a 42-0 win over Truman last week, the running back popped off for 108 yards rushing and two touchdowns.

During a 35-6 win over Winnetonka, the senior running back had 131 yards rushing and two touchdowns.

The running back did everything during Week 10, running for 91 yards and a touchdown while recording 12 tackles and returning an interception for a touchdown.

Feuerbacher shredded the defense in a Week 10 win over Waynesville, throwing for 338 yards and four touchdowns.

Ortinau, a quarterback, threw for 388 yards passing and two touchdowns in a 49-0 win over Hazelwood East.

The running back had a season-best performance when he rushed for 283 yards and four touchdowns during Week 10.

Ruble terrorized the opposing front-seven during a 38-12 win over Fox, rushing for 226 yards and two touchdowns.

Dominic, a running back, rushed for 169 yards and two scores despite a 49-13 loss to Sacred Heart-Griffin.

During a 50-13 win over Pattonville, Billings caught three passes for 124 yards and a touchdown.

During the Panthers’ 28-6 win over Blue Springs South, the senior wide receiver had five catches for 122 yards and two touchdowns.