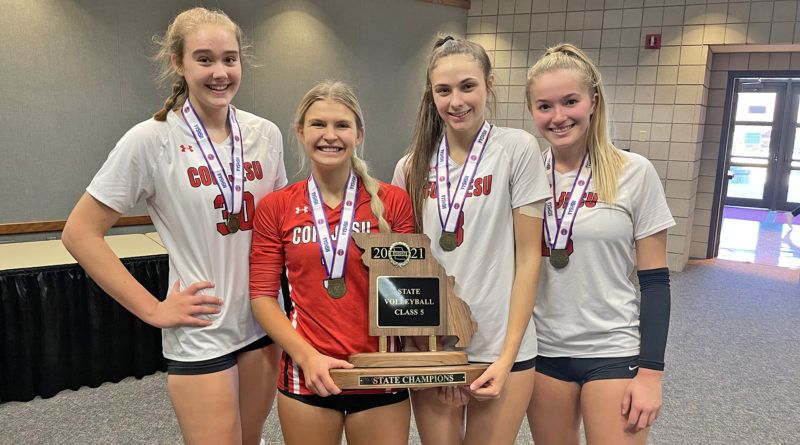 Blair Oaks came to the Missouri State High School Activities Association volleyball championships for the first time in school history and returned to central Missouri with the Class Three title to highlight the action Friday at the Show Me Center in Cape Girardeau, Mo.

Westminster (26-8) grabbed their first state title in Class Four since 2012 and only the second volleyball championship in school history as the Wildcats swept Logan-Rogersville 25-14, 25-23, and 25-17. WCA came out in the first set on fire with a .400 attacking percentage as they converted 20 kills on 40 total attacks to take the first game. Logan-Rogersville (22-12-1) gained control in the second set as they took a 22-19 lead, but Westminster scored six of the last seven points in the game to take a 2-0 lead in the match. It was all WCA in the third set as the Wildcats took an early lead and never was challenged en route to the championship.

Alex Bishop paced the WCA attack with 13 kills on 29 attacks while Sophia Shaver handed out 21 assists. Brianna Linehan led the way for Logan-Rogersville with nine kills and eight digs while Lauren Tyler dished out 27 assists in the loss.

Cor Jesu needed four sets to defeat Lee’s Summit West in the Class Five championship 3-1 to claim its fifth volleyball championship. The Chargers (23-5-3) raced out to a 2-0 lead in the match by taking the first two sets by scores of 25-14 and 25-18. The Titans (23-21-1) battled back in the third set by defeating Cor Jesu 25-22 to cut the deficit to 2-1. The Chargers were able to hold off Lee’s Summit West in the fourth set with a few timely kills late in the game to win 25-23 and earn its first title since 2002.

Kylie Drysdale paced the Chargers with 10 kills and 13 digs while Madison Hoffman added another 13 digs and Mia Hinkamper dished out 20 assists in the Cor Jesu win. Sydney Handel led the Titans attack with 14 kills, and she added 14 digs with Lacey Higgins giving out 42 assists.

Blair Oaks made the most of their first-ever trip to the state volleyball Final Four by sweeping Strafford 3-0 in the Class Three Championship match. The Falcons (35-4) used 17 kills on 38 attacks to take the first set 25-17 and then limited the Indians to only nine kills in the second set to win 25-16 and extend the lead to 2-0. Blair Oaks clinched the title by winning the third set 25-18 as they brought the title back to central Missouri for the first time in school history.

Autumn Bax led the Falcons attack with 16 kills on 32 attacks while Madilyn Rissmiller handed out 37 assists. Payton Mitchell was outstanding on the defensive side for Blair Oaks with 18 digs. The Indians were led on the attacking side by Christa Duffel with nine kills with Abby Chadwell having 18 assists and 10 digs.