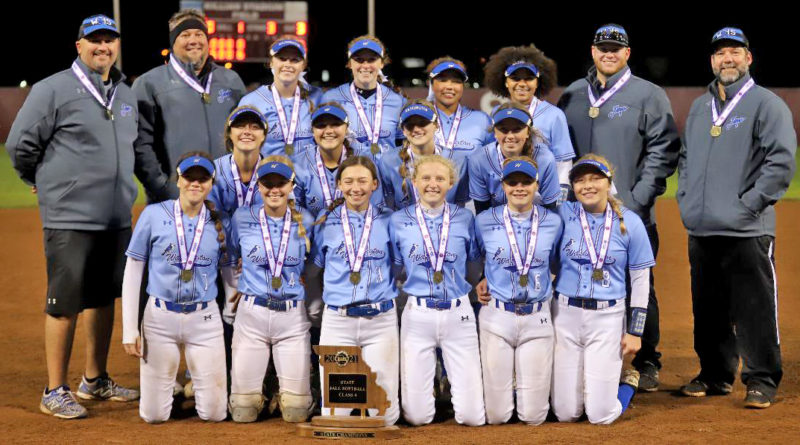 The Missouri State High School Activities Association crowned five state champions this past weekend at the 2021 MSHSAA state softball championships. The state Final Four needed to wait a day as rain washed out the first day of the championships in Springfield, but the state association was able to use two high school fields to host the semifinals while all five state championship games were able to be played at the Killian Softball Complex on Friday and Saturday of last week.

Lee’s Summit West scored six runs in the final two innings to come away with a 6-5 victory over Francis Howell Central to win the Class Five State Championship.

Francis Howell Central cracked the scoreboard in the top of the first as Emily Chadwick started the contest with a double and scored on a sacrifice bunt to stake the Spartans to an early 1-0 lead. Howell Central added three more runs in the frame on three hits and another suicide squeeze to grab a 4-0 advantage. The Spartans extended the lead in the second as Haile Hale ripped a triple to the right field wall and scored on a Josie Bezzole infield single to take a 5-0 lead.

Lee’s Summit West cut into the Spartan lead in the fourth as Taylor Pannell hit a triple to centerfield and scored on a Riley McGovern single up the middle to make the score 5-1. The Titans drew even with Howell Central in the sixth as Lee’s Summit West pushed across four runs in the frame to put the score at 5-5. After scoring two runs on three doubles, Kat Wilds hit a two-run blast over the left field wall to tie the game. It was her fourth round tripper of the day as she hit three homers in the Titans 19-1 semifinal win over Parkway West.

The Titans completed the comeback in the seventh as they loaded the bases and McGovern hit a walk-off single to drive in her third run of the evening as it gave Lee’s Summit West its first State Championship. Pannell earned the win in the circle for the Titans.

Washington used a dominant pitching performance by Taylor Brown and a pair of big innings to defeat Rolla 11-0 in five innings. The Blue Jays claimed their first softball state championship and only the school’s second state title.

Taylor was sensational in the circle with 10 strikeouts to pace the Blue Jays while Elizabeth Reed struck out the side in the fifth to secure the win.

In a pitchers’ duel, Blair Oaks plated a run in the bottom of the seventh inning to defeat Chillicothe 3-2 in the Class Three State Championship game.

The Lady Falcons cracked the scoreboard in the third inning as Kally Bruce opened the frame with double and scored on a Kenzie Libbert infield groundout to give Blair Oaks a 1-0 lead. The Lady Hornets answered in the top of the fourth as Kinlei Boley singled and scored on a Kristen Dunn hit a double to center field to even the game at 1-1.

The Lady Falcons regained the lead in the sixth as Grace Boessen hit an RBI single to score Anna Hankins to put Blair Oaks on top 2-1. Chillicothe once again answered in the top of the seventh Sophia Luetticke singled came home on a Boley single to left to tie the game once again at 2-2.

Blair Oaks won the game in the bottom of the seventh as Macee Ernst drew a bases loaded walk with no outs to give the Lady Falcons their second title in program history. Andi Siebeneck struck out nine with no walks and limited the Lady Hornets to eight hits to pace Blair Oaks in the win.

Marceline needed a big seventh inning to defeat Sherwood 4-1 in the Class Two title game to give the Lady Tigers its first-ever state championship.

Sherwood started the scoring in the bottom of the first by loading the bases on a pair of walks and a Marceline error. Sarah Dunker drew the third walk of the inning to push across a run as it gave the Lady Marksmen a 1-0 lead.

The Lady Tigers evened the game in the top of the fourth as Ireland Boss lifted a home run over the center field wall to make the score 1-1. The scored remained tied until the seventh when the Lady Tigers broke the tie on Ireland’s second homer of the game to put Marceline on top 2-1. The Lady Tigers added a two-run blast by Gracey Jordan with one out to give Marceline a 4-1 advantage. Sherwood could not score in the bottom of the frame as Cassie Rodgers forced a pair of groundouts and strike out with runner at second and third to give the Lady Tigers the victory.

In a game that saw no scoring until the sixth inning, Maysville scored four times in the final two frames to win the Class One title game 4-0 over La Plata to give the Lady Wolverines their second state championship in three seasons.

Maysville opened the scoring in the top of the sixth as Rylie Boyer ripped a triple off the wall in center field and scored on an errant throw to put the Lady Wolverines ahead 1-0. Maysville added to the lead in the seventh as Marybella Redman, Claire Catlett, and Hailey Lemunyon each drove in runs to give the Lady Wolverines a 4-0 lead.

After LaPlata opened the bottom of the seventh with a Bryn Buescher single, Lemunyon forced a pair of groundouts and a strike out to give Maysville the state title.