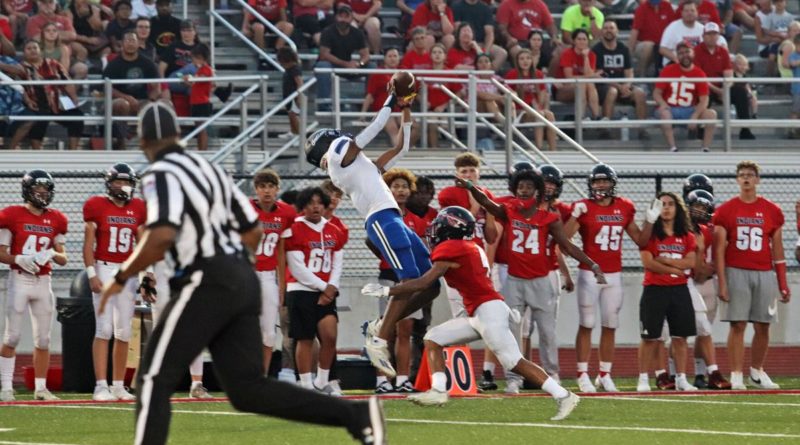 Over the next few weeks, we’ll be taking a position-by-position look at some of the top players in Missouri high school football. This list focuses on the defensive backs.

There are hundreds of standout football players in Missouri, and these lists are not intended to be comprehensive. Use the comments section to discuss the other defensive backs worthy of fans’ attention in 2021.

Ardito has been a menace in the Panthers’ defensive backfield, flying around to make 65 tackles this season while intercepting five passes and recovering a fumble. The senior has had two, two-interception outings this fall; the first was during a 20-14 win against Rockhurst in Week 1, and the second was during a 36-24 win against Blue Springs South on Oct. 1.

In addition to being one of Gallatin’s reliable receivers — reeling in 20 catches for 330 yards and four touchdowns this fall — Bird has terrorized opposing quarterbacks. Just a junior, Bird has 36 tackles, six interceptions and two pass deflections. He had an interception in five consecutive games, starting during Gallatin’s 13-12 loss to Polo on Sept. 17 and ending when the Bulldogs took a 37-6 win over Trenton on Oct. 15.

After a season in which he was named to Class 2’s first team, Cox has followed that up with a senior year that’s included nearly 20 tackles and two interceptions. During a matchup with perennial powerhouse and conference rival Maryville Sept 17, he blocked the game-tying field goal to allow the Warriors to walk away with a 14-13 win.

Epps, a three-star recruit, chose to be a Cowboy when committed to Oklahoma State in February — seven months prior to his senior season even beginning. He’s done it all for Chaminade this fall, tallying 38 tackles and a sack on defense, while having 110 carries for 980 yards and 14 touchdowns on offense. He’ll move to Stillwater, Okla., upon graduation in the spring, but he’ll first try to lead the Red Devils (4-2) to a deep postseason run.

Fisher has done everything for an Aurora team that finished the regular season 7-2. The senior had 93 tackles, five interceptions, 11 pass deflections and a forced fumble this fall. He’s doing all of that while serving as a focal point of the Dawgs’ offense, rushing for eight touchdowns and passing for four more.

Fuller has been a massive part as to why no team has put up more than 21 points on St. Mary’s this fall. The four-year starter has 26 tackles, two sacks and three interceptions during his farewell tour, including a 42-yard interception return for a touchdown during a 52-7 win against John Burroughs in Week 9. The three-star recruit currently has offers from Arizona State and Central Michigan.

Gosnell is the third player on this list to enter this season coming off of a campaign that warranted an honor of Class 2’s first team. As a junior, he had 14 touchdowns on offense to go along with 30 tackles, two tackles for loss, two interceptions and an interception return for a touchdown. Lexington hasn’t found much success this fall, carrying just a 2-5 record into districts, but when the Minutemen have, Gosnell has played a key part in it.

Gray is the other half of De Smet’s defensive-backfield duo, locking down opposing wide receivers on the side of the field opposite of Kaleb Purdy. Just a junior, the four-star recruit has offers from Oklahoma, Ohio State, Kentucky, Notre Dame, Iowa, Illinois and Florida. He hasn’t had any eye-popping stat lines this fall, but he has recorded 19 tackles and an interception en route to De Smet riding a 7-2 record into the postseason.

Haney, who also runs cross country and plays basketball for Lee’s Summit West, has been on a mission this fall. The senior is leaving his mark in his final season with the Titans, having 22 tackles, five interceptions, 11 pass break-ups, a forced fumble and a fumble recovery. Despite a 28-20 loss to Liberty Sept. 17, Haney had a punt return for a touchdown and returned an interception for a score.

Not a lot of teams have thrown the ball in Hutson’s direction, and he’s given them a reason to shy away from his side of the field. The senior entered this fall on the heels of a junior campaign that featured more than 50 tackles, an interception and 14 pass deflections. He’s continued that into his farewell tour, having 17 tackles, two interceptions and four pass deflections. He returned one of his interceptions for a touchdown during a 42-13 win against Raymore-Peculiar Sept. 10.

After receiving offers from Eastern Illinois, Southern Illinois and Indiana State, Lee chose to further his football career when he committed to South Dakota State in early July. This fall, he’s shown why the Jackrabbits wanted him, having 47 tackles and three interceptions en route to Fort Zumwalt North’s 6-3 record in the regular season. Perhaps his most notable game this fall was when he had 14 tackles and an interception during a 56-7 win against Washington Sept. 17.

Mack entered his senior season committed to Kansas, but he de-committed Oct. 18, hoping to receive more offers than the ones he currently has from UT-Martin and Miami (Ohio). He’s putting together a high-school finale that includes 46 tackles, an interception, eight pass break-ups and a fumble recovery. The three-star recruit warranted his offers even prior to stepping foot on the field this fall, coming off of a junior campaign that featured four interceptions and 39 tackles.

When McKee isn’t helping out Boonville’s offense find the end zone, he’s preventing the opposition from doing just that. He has 50 tackles, half a sack, four interceptions and two forced fumbles this fall, all en route to Boonville carrying a 7-2 record into the postseason. After not seeing the field very much throughout his first three years, McKee is showing why he’s one of the premier defensive backs in the middle of Missouri.

Purdy has been half of the reason receivers haven’t had much success against De Smet this fall. The three-star recruit had offers from Michigan, Missouri, Kansas State and Iowa State before electing to commit to Kansas two months before the season started. This fall, he’s had 36 tackles, including two tackles for loss. His breakout game of the season came during a 32-17 loss to East St. Louis Sept. 4, when he had 10 solo tackles. He also has a return for a touchdown this season on special teams.

After a 48-44 loss to East St. Louis in Week 1, Schonhorst has been a massive part in why Christian Brothers has won its last eight games, carrying an 8-1 record into the postseason. The wideout-turned-cornerback has 11 tackles and an interception this fall, and a month after receiving an offer from Ball State in June, he committed to the Cardinals’ program.

Thompson, who is planning to stay close to home after committing to the University of Missouri to play football, has been on the unfortunate end of things during the last couple of years. He missed all of his junior season due to long-lasting effects from contracting COVID-19, and he suffered a season-ending leg injury during a Week 2 matchup with Chaminade. Prior to the injury, though, he was doing it all for SLUH, recording 14 tackles and two touchdowns on offense. During his last full season in 2019, he had 39 tackles and two interceptions.

Despite not having the team success that Central would’ve hoped for, Vassar has been a crucial part in what the Indians have done this fall. He finished the regular season with seven touchdowns on offense, seven interceptions and four pass break-ups. Despite an eventual 51-27 loss to Class 6 powerhouse Park Hill South in the regular-season finale, Vassar made it tough for the South’s offense, reeling in two interceptions.

Wilkerson, just a junior, entered this fall following a sophomore season that included 108 tackles and seven interceptions to go along with a nomination to the Class 2 first team. He’s continued that this fall, too, shying opposing quarterbacks from throwing his way, while still supporting the run like a linebacker. He’s played a massive part as to why no team has scored more than 22 points on Lamar this season, all while the Tigers have remained undefeated heading into the postseason.

After a sophomore campaign with five interceptions and 43 tackles in 2019-20, teams realized Williford was an opposing offense’s nightmare. This season, the three-star recruit has compiled 33 tackles — including seven tackles for loss — and three fumble recoveries to lift Lutheran North to a 6-3 record in the regular season. He’s received offers from Oregon, Missouri, Michigan State, Kansas, Iowa State and Wisconsin.