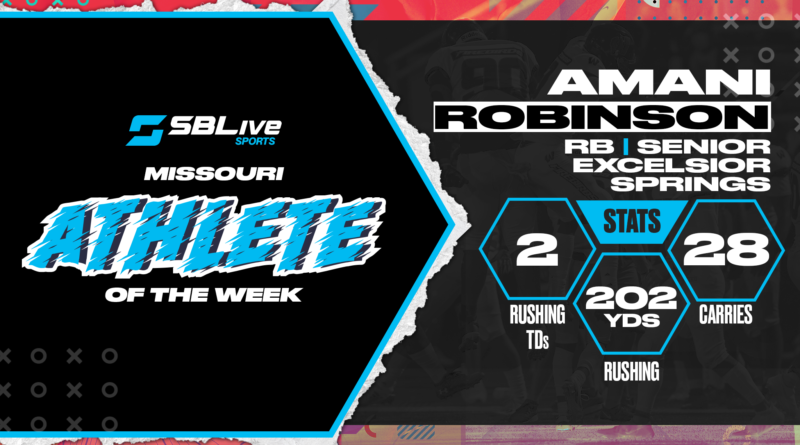 Congratulations to Excelsior Springs running back Amani Robinson for being voted SBLive’s Missouri High School Athlete of the Week for Oct. 18-24!

Robinson, a senior running back, had 202 yards rushing and two touchdowns on 28 carries during the Tigers’ 41-40 win against Pleasant Hill on Oct. 22.

Robinson received 51.35% of the vote, beating out Cameron’s Avery McVicker who finished second with 22.78%. Penney’s Bryson Speer finished third with 9.73% and Lutheran St. Charles’ Arlen Harris Jr. finished fourth with 8.73%. There were over 21,000 votes tallied this week!

Despite a 45-28 loss to De Soto in Week 9, the senior wideout reeled in eight catches for 148 yards and two touchdowns.

Dalton, a junior libero, had her second-best outing of the season when she had 43 digs with only seven errors during a 3-2 win against Windsor Oct. 19.

Walls scored four touchdowns in back-to-back weeks while rushing 113 yards on 17 carries during the Pirates’ 39-3 win against Lansing in Week 9.

Fulliam, a sophomore, had no pressure toward the end of the 5,000-meter run at the Vienna Autumn Classic Oct. 18, finishing with a first-place time of 21 minutes, 9 seconds and 37 milliseconds. Her finish was 38 seconds faster than second.

At the Bowling Green Invite Oct. 22 in Bowling Green, Mo., the junior finished the 5,000-meter run in 15 minutes, 33 seconds and 56 milliseconds. Burns finished in first place, 18 seconds ahead of the runner who finished second.

The junior running back had a career-best performance when he carried the ball 36 times for 227 yards rushing and three touchdowns during Pleasant Hill’s 41-40 loss to Excelsior Springs in Week 9.

Raga, a junior setter, had 33 assists during a four-set win against Incarnate World in the Class 5 District 5 title game Oct. 23 in Frontenac, Missouri.

The junior pitcher willed Parkway South to the Class 5 Semifinals with a dominant outing during a 3-2 win against Poplar Bluff Oct. 21, only allowing one run and four hits while recording 11 strikeouts.

The junior did it all despite a Week 9 loss to Grain Valley, recorded 10 catches for 197 yards receiving and two scores, as well as passing for 26 yards and a touchdown while going 2-of-4.

Mullen tallied 51 assists on 119 ball handling attempts during the Blue Jays’ 3-1 victory against Lee’s Summit North Oct. 19. That was the second-most assists the junior setter has had this season.

Reed, a senior, carried the ball 14 times for 138 yards rushing and two touchdowns during the Owls’ 30-0 win against Cameron Oct. 22. He also had an interception.

During the Hornets’ 41-0 win against Lawson in Week 9, the senior had two touchdowns and 126 yards receiving on just three catches.

The senior took care of business at the Waynesville District Warmup Oct. 21 in Fort Leonardwood, Missouri, finishing with a first-place time (9:54.21) that was nearly 30 seconds ahead of second place.

The junior quarterback went 16-of-29 for a season-high 249 yards passing and five touchdowns en route to the Panthers securing a 43-40 win against Park Hill after three overtimes Oct. 22.

On her home course at the El Dorado Springs Invitational Oct. 19, the junior finished the 5,000-meter run with a first-place time of 21 minutes and 12 seconds.

Mosh, a senior quarterback, completed 18-of-25 passes for 180 yards and four touchdowns during the Warriors’ 35-0 win against Savannah in Week 9. He also had two tackles and an interception.

During the Dragons’ 3-0 win against Plattsburg Oct. 18, the senior outside hitter and defensive specialist had 14 kills on 20 attempts to go along with 10 digs.

During Raytown’s 56-7 win against Truman in Week 9, the senior running back had 177 yards rushing and four touchdowns on 13 carries. He had two catches for 71 yards and a score, too.

Gray, a junior outside hitter, had 23 kills on 31 attempts during the Bearcats’ 3-0 sweep of Valley Oct. 21. She also had eight digs.

Panagos, a sophomore quarterback, had 149 yards through the air and two passing touchdowns to go along with 122 yards rushing and two scores on the ground during Scott City’s 42-6 win over Doniphan Oct. 21.

Smith, just a freshman, finished the 5,000-meter run with a first-place time of 17 minutes 25 seconds and 3 milliseconds at the Dexter Invitational Oct. 23 in Dexter, Mo.

Heitman, a senior running back, switched from the backfield to wideout for the Bulldogs’ 55-14 win against Harrisonville in Week 9, catching six passes for 121 yards and two touchdowns. He also had a punt return for a touchdown.

The senior running back, and Stanford commit, rushed for 147 yards and three touchdowns during a 72-34 win against Priory Oct. 23.

At the Clayton High School Invitational Oct. 22 at Shaw Park, the freshman finished the 5,000-meter run with a first-place time of 20 minutes, 13 seconds and 95 milliseconds.