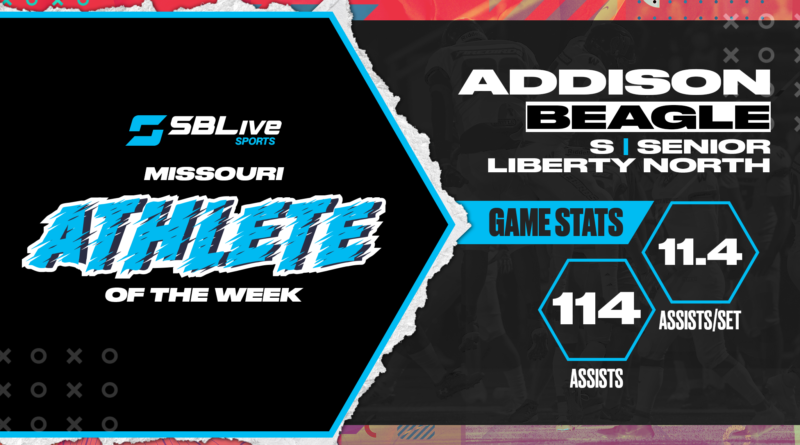 Beagle ran away with this week’s honor, receiving 80.12% of the total vote.

Brown, a senior quarterback, was unstoppable in Lutheran North’s 50-34 win over Bishop Miege in Week 8. He finished 22-of-33 for 399 yards passing and five touchdowns to go along with 199 yards rushing and a touchdown on 19 carries.

At the Brian T. Simpson Invite Oct. 16 in Columbia, Missouri, the senior finished the 5,000-meter run with a first-place time of 16 minutes, 11 seconds and 89 milliseconds. Hinrichs finished nearly two minutes ahead of the runner in second place.

Despite a 49-35 loss to crosstown rival Blue Springs, the senior wideout reeled in five catches for a season-high 146 yards receiving and two touchdowns. He averaged 29.2 yards per catch.

Carroll, a freshman, recorded 39 kills when Whitfield nabbed a 3-0 win against Brentwood Oct. 13. She finished with 73 attempts, meaning she converted at a rate of 53%.

The senior running back ran wild on rival Blue Springs South, carrying the ball 18 times for a season-high 206 yards rushing and three touchdowns. It marked his first hat trick of the season.

Rose, a senior, was able to record a two-game sweep with scores of 6-2, 6-2 in the finals of the Class 1 singles tournament. It marks the first tennis title in the school’s history.

During Winnetonka’s 47-21 win against Capital City in Week 8, the sophomore wideout caught six of his 10 targets for a season-high 180 yards receiving and two touchdowns.

Chadwell, a junior setter, had 37 assists and nine digs during Strafford’s 3-0 sweep of Skyline Oct. 14.

Koch had a career-best performance despite a 41-10 loss to Christian Brothers College. The senior wide receiver had 203 yards receiving and a touchdown on 10 targets.

Edwards, a senior, did it all during the Guardians’ 41-16 win against Hogan Prep in Week 8. At running back, he had a season-best 168 yards rushing to go along with two touchdowns on 18 carries. At safety, he made six tackles and had two interceptions.

At the Class 4 District 1 Tournament Oct. 11, the freshman tallied a 5-over-par 77 to propel Lafayette to a second-place finish at Paradise Valley Golf and Country Club.

Jenkins, a senior running back, carried the ball 16 times for 195 yards rushing and four touchdowns during Holden’s 58-0 win against Carrollton Oct. 15.

Marcum, just a junior, finished in first place at the Farmington Cross Country Invitational Oct. 16 in Farmington, Missouri. Her time of 18 minutes, 28 seconds and 68 milliseconds was nearly a minute and a half ahead of second place in the 5,000-meter run.

During the Bulldogs’ 41-18 win against Lawson in Week 8, the sophomore running back had 12 carries for 179 yards rushing and two touchdowns, averaging 14.9 yards per carry. At his safety spot on defense, Klein had an interception.

When Winfield took down Central 3-1 Oct. 14, Kuntz received 28 serves with only two errors. The sophomore defensive specialist also had 29 kills during the four-set match.

The senior wide receiver had eight catches for a season-best 176 yards receiving and two touchdowns en route to the Panthers beating Lee’s Summit 34-27 in overtime during Week 8.

Wolfe, a senior, finished with a first-place time of 17 minutes, 33 seconds and 78 milliseconds in the 5,000-meter run at the NCMC Cross Country Championship Oct. 16 in Kirksville, Missouri.

In the Panthers’ 49-17 win against Liberty during Week 8, the senior running back carried the ball 17 times for 191 yards rushing and two touchdowns. He averaged 11.4 yards per carry.

Walls, a sophomore, had one of his better performances of the season when the running back carried the ball 24 times for 108 yards rushing and four touchdowns during Platte County’s 44-8 win against Raytown South Oct. 15.

Kenney, a junior outside hitter, recorded 18 kills during Stockton’s three-set sweep of Pierce City Oct. 12. She also had 13 digs across the three sets.

During the Flyers’ 21-14 win against Hazelwood Central on the road, the junior running back carried the ball 47 times for 231 yards rushing and two touchdowns.

Pattison, a sophomore, finished the 5,000-meter run with a first-place time of 19 minutes and 38 seconds at the West Platte Invitational Oct. 16.

During Grain Valley’s 21-14 win against Raytown, the senior linebacker was crucial in holding the Blue Jays’ offense to only two scores. Forkner had 8½ tackles, two tackles for loss and a sack.