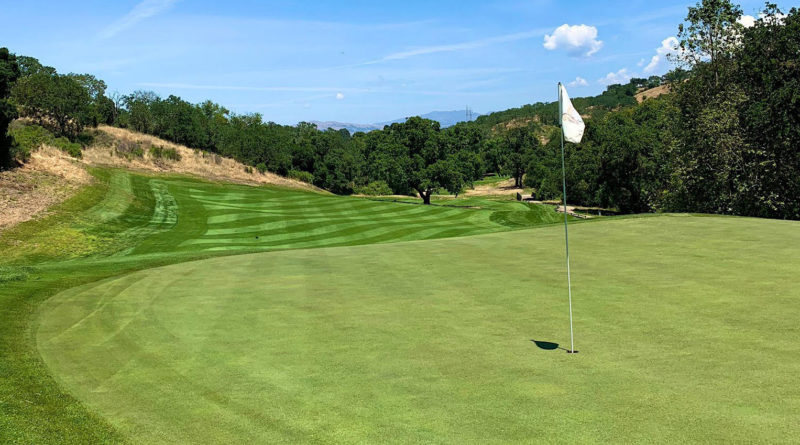 Perfect fall weather made for ideal conditions for the 2021 Missouri girls golf state championships. Here’s a summary of the highlights from each of the four state tournaments that were held Monday, Oct. 18, and Tuesday, Oct. 19, around the state.

It wasn’t easy, but the Angels made history by extending their MSHSAA record with a sixth-consecutive state team championship.

St. Joseph Academy’s actually trailed Liberty North by one stroke in the Class 4 team standings after the first day of the two-day tournament at Rivercut Golf Course in Springfield. That’s something the Angels needed to do only once before during their state title streak – when they trailed Notre Dame de Sion by two strokes after day one in 2017.

“It just shows how we’re able to grind,” St. Joseph’s senior Mia Rallo told STLhighschoolsports.com. “Coming from behind just gave us an edge. Being behind by one was a different feeling because it’s like, ‘Man, we’ve got to get going.’ I feel like it kind of put some good nerves on us to make everyone do better.”

St. Joseph’s Academy turned in a team score of 309 on day one and went even lower with a 307 on day two for a winning score of 616. Liberty North, which made its own team history with the program’s highest finish as the state runner-up, posted a 308 and 322 for a 630 and finished 14 strokes behind.

Three Angels finished in the Top 10 individually to spark the comeback victory. Rallo keyed the rally as she placed 10th in the final individual standings, which made her a four-time all-state golfer in her prep career. She struggled on day one with an uncharacteristic round of 82, but she responded with a 1-over-par 73 on day two for a total of 155. Isabella Arro (71-77-148) finished as the individual state runner-up, while Rylie Andrews (77-77-154) tied for eighth.

Liberty North sophomore Bailey Burkett captured the individual state title after placing fourth as a freshman. Burkett carded an impressive 1-under-par, two-day total of 143 to finish five strokes ahead of her nearest competitor. She fired a 2-under-70 on day one and 1-over-73 on day two.

Some things never change. Springfield Catholic won its third-straight team title and captured the individual title for a fourth year in a row by dominating the Class 3 tournament at Meadow Lake Acres Country Club in New Bloomfield.

Springfield Catholic ran away from the rest of the field, winning the title by 90 strokes. The Irish posted a team score of 307 on day one and 306 on day two for a winning total of 613. Webster Groves (703), Father Colton Regional Catholic (704) and Rolla (712) rounded out the top four.

Senior Reagan Zibilski won the individual state crown for the second year in a row. She fired a 6-under-par 66 on day one of the tournament and followed that up with a 1-over-par 73 on day two. Zibilski’s two-day total of 139 was six strokes better than state runner-up Audrey Rischer of Father Tolton (71-74-145). Lyla Louderbaugh (77-72-149) and Kyleigh Pfitzner (76-78-154) gave the Irish three of the top four finishers in the state.

For the first time since 2008, Visitation Academy claimed the state championship. It was the Vivette’s fourth state title in program history.

There was not much suspense in this latest championship run. Visitation Academy led the field by more than 40 strokes after day one finished 69 stokes ahead of second-place Ursuline Academy in the final standings of the Class 2 tournament at Columbia Country Club in Columbia.

Visitation Academy won the state title with a team score of 686. Ursuline Academy (755) took second place, followed by Kirksville (790) and Helias Catholic (811). Marlene Edgeman of Marshfield captured the individual state crown with a 36-hole total of 151, shooting an even-par 72 on day one and a 79 on day two.

Kathryn Fesler picked a good time to play the best round of her life. The Villa Duchesne senior shot a career-best, 10-over-par 82 on day two of the Class 1 tournament to spark her team at Silo Ridge Golf and Country Club in Bolivar.

Visitation Academy shot identical rounds of 377 on both days of the state tournament and posted a 36-hole winning team score of 754. New Covenant Academy finished second with a 799. Centralia (811) and East Buchanan (811) rounded out the top four teams. Savannah Thessing of New Covenant posted consistent rounds of 86 and 86 for a total of 172 to win the individual state title by five strokes.