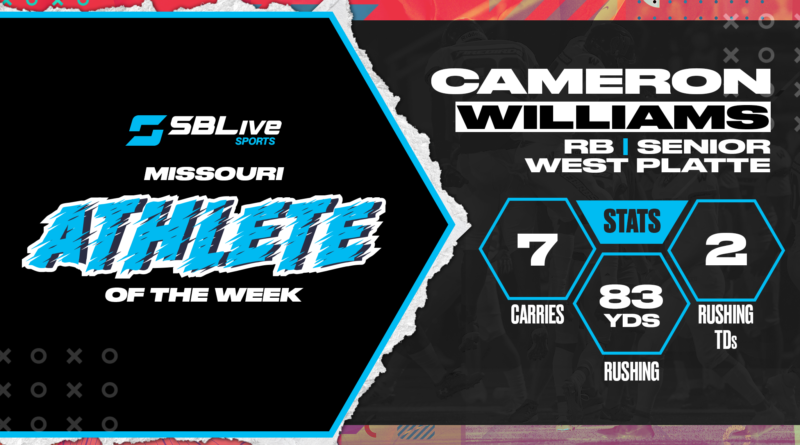 Congratulations to West Platte running back Cameron Williams for being voted SBLive’s Missouri High School Athlete of the Week for Oct. 4-10!

Williams ran away with this week’s honor, receiving 74.73% of the total vote.

Hall, a senior running back, totaled 190 yards rushing and four touchdowns on 33 carries during the Indians’ 35-21 win against Blue Springs South Oct. 8. He had two catches for 36 yards, too.

Ding, a sophomore, recorded a comeback win after taking a 6-3 loss in the first set to advance to the Class 1 tournament. She won the final two sets 7-5 and 10-4.

Despite a 42-41 loss to Odessa, the Center junior wideout snagged nine catches for 201 yards receiving and three touchdowns. All three of those figures are new season highs for Russell.

The junior, who plays third base, was 2-for-2 with a two-run home run in the first inning of the Cardinals’ 10-8 win against Rock Bridge Oct. 9.

During Grain Valley’s 45-7 win against William Chrisman in Week 7, the junior quarterback was 9-for-15 for 114 yards passing and three touchdowns. On the ground, Larson had 10 carries for 81 yards rushing and a touchdown.

Harris, a junior, finished the 5,000-meter run with a first-place time of 15 minutes, 52 seconds and 12 milliseconds at the 20th Annual Cedar Ridge Invitational Oct. 9.

During Kearney’s 49-8 win against Raytown South, the senior running back carried the ball 12 times for 225 yards rushing and five touchdowns. He averaged 18 yards per carry.

Chatfield, only a sophomore, ran the 5,000-meter race in 20 minutes, 34 seconds, 20 milliseconds. That time was good enough for first place in the large school division at the Butler Bear XC invitational Oct. 9 in Butler, Missouri.

Phillips, a senior outfielder, hit her first home run of her high school career during the first at-bat of Eureka’s 8-1 win against Marquette Oct. 5. She reached base three times throughout the 7-run triumph.

The Spartans senior linebacker recorded three tackles, including one tackle for loss, and a sack during De Smet’s 28-14 win against Rockhurst in Week 7.

At the Buffalo Invitational Oct. 7 in Buffalo, Mo., House finished the 5,000-meter run in 20 minutes, 47 seconds and 28 milliseconds. The freshman’s finish was good enough for first place.

During Fox’s 69-38 win against Hazelwood West in Week 7, the sophomore had three rushing touchdowns to go along with two passing.

At the Class 1 Section 3 girls sectional tournament, the junior earned a place in the Class 1 final 16. After losing the first set 6-3, Beckemeier rallied to win the next two by scores of 6-1 and 11-9.

Gines, a senior running back, carried the ball 12 times for 261 yards and four touchdowns during the Wildcats’ loss to Fox in Week 7. He also had seven catches for 131 yards receiving, including a 46-yard touchdown to give him five total scores in the game.

Bridges, a senior quarterback, was 14-for-18 for 419 yards passing and five touchdowns during the Rebels’ 61-0 win against Fredericktown in Week 7.

The senior setter had 25 digs — tied for a season high — and a match-high 41 assists during Midway’s 3-1 win against Adrian Oct. 7.

During the Mustangs’ 34-14 win against Kirkwood, the junior wideout tallied four catches for 122 yards and touchdown.

Wolfe, a senior, finished the 5,000-meter run with a first-place time of 17 minutes, 48 seconds and 60 milliseconds at the Frank Lemons Invitational Oct. 9 in Hannibal, Missouri.

Arzola, a senior running back, carried the ball 17 times for 114 yards (6.7 yards/carry) and a season-high four touchdowns during the Eagles’ 38-35 win against Lee’s Summit North Oct. 8.

During Skyline’s 3-1 win against Clever Oct. 7, the junior outside hitter tallied six kills and a match-high 34 digs.