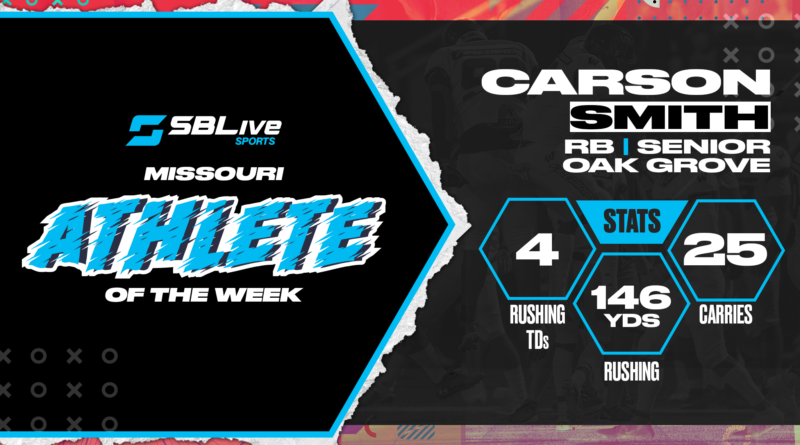 Congratulations to Oak Grove running back Carson Smith for being voted SBLive’s Missouri High School Athlete of the Week for Sep. 27-Oct. 3!

The senior RB took 25 carries and turned those into 146 yards rushing and four touchdowns during Oak Grove’s Week 6, 34-27 win against Pleasant Hill.

Smith received 55.1% of the vote, beating out Raymore Peculiar‘s Jack Ardito who finished second with 36.82%. Liberty’s Tyler Lininger finished third with 5.45% and Odessa’s Blake Heiman finished fourth with 1.26%. There were over 28,000 votes tallied this week!

Bailey, a sophomore running back, carried the ball 23 times for 242 yards rushing and two touchdowns en route to the Blackhawks beating Crest Ridge 21-14 in Week 6.

During Parkway South’s 12-1 win against Parkway North Oct. 1, the junior pitcher only allowed three hits. Along with that, she hit a grand slam in the sixth inning.

The Blue Jay senior quarterback was 14-for-18 for 396 yards passing and four touchdowns during Liberty’s 59-30 win against Columbia Rock Bridge in Week 6. He also had three carries for 12 yards rushing.

Leach, just a sophomore, finished the 5,000-meter run with a first-place time of 23 minutes, 57 seconds and 32 milliseconds at the East Carter Invitational Oct. 2 in Ellsinore, Missouri. Leach finished more than a minute before second place.

During Lafayette County’s 39-0 win against Holden in Week 6, the senior wideout reeled in four catches for 142 yards receiving and two touchdowns.

Throughout 15 sets of action at the Neosho Tournament Oct. 2, the senior libero and defensive specialist recorded 121 digs (8.06 digs/set).

The senior running back totaled 153 yards rushing and four touchdowns on 23 carries during the Bulldogs’ 42-14 win over Winnetonka Oct. 1. He averaged 6.4 yard per carry.

Mozee, a freshman wideout, had four catches for 113 yards receiving and two touchdowns during the Broncos’ 35-0 win against Blue Springs in Week 6.

During Rockhurst’s 21-10 win over Lee’s Summit West Oct. 1, the senior fullback/running back carried the ball 33 times for 219 yards rushing and two touchdowns. He had a catch for 1 yard, too.

At the Bishop LeBlond Invitational Oct. 2, the senior middle hitter led Midway to a 5-1 record with 73 kills across 12 sets (6.08 kills/set).

The Bulldog senior running back racked up 141 yards and two touchdowns on 10 carries during Odessa’s 40-0 win against Warrensburg in Week 6.

Hagemeyer, a junior, finished the 5,000-meter run with a first-place time of 17 minutes, 46 seconds and 67 seconds at the Calvary Invitational Oct. 2 in Jefferson City, Missouri.

Laster, a sophomore linebacker, recorded six total tackles, a sack and two tackles for loss during the Eagles’ 42-3 win against Park HIll Oct. 1.

Walter, a senior setter, tallied 73 total assists during seven sets of volleyball last week. She tied her season-high with 41 despite a 3-1 loss to St. Pius X Sept. 27, and followed that with 32 in a 3-0 sweep over Pembroke Hill Sept. 29.

Russell, a sophomore, finished the 5,000-meter run with a first-place time of 18 minutes and 35 seconds at the Mike Spoede Warrenton Invitational Oct. 1. Russell finished 46 seconds ahead of second place.

Ardito, a senior, tallied three tackles and two interceptions during the Panthers’ 36-24 win against Blue Springs South in Week 6.

During the Indians’ 6-3 win against conference foe Park Hill South Sept. 29, the freshman hit a two-run home run, her fifth this season.

The Blue Jay senior running back recorded a season-high 200 yards rushing on 11 carries to go along with four touchdowns during Raytown’s 43-13 win against Belton in Week 6.

During the Savages’ 51-23 win against Cameron last week, the sophomore running back tallied 342 yards rushing and four touchdowns on 23 carries. He had two catches four 15 yards, too.

Out of 50 runners at the North Callaway XC Invite Oct. 2 in Kingdom City, Missouri, the senior finished the 5,000-meter run in 16 minutes, 35 seconds and 44 milliseconds. McCown’s time was good enough for first place and was 52 seconds faster than second place.

During Gideon’s 3-0 win against Campbell Oct. 1, the senior setter set a new season high with 36 assists. She had 63 attempts to do so, too, meaning she capitalized on 57% of the opportunities.